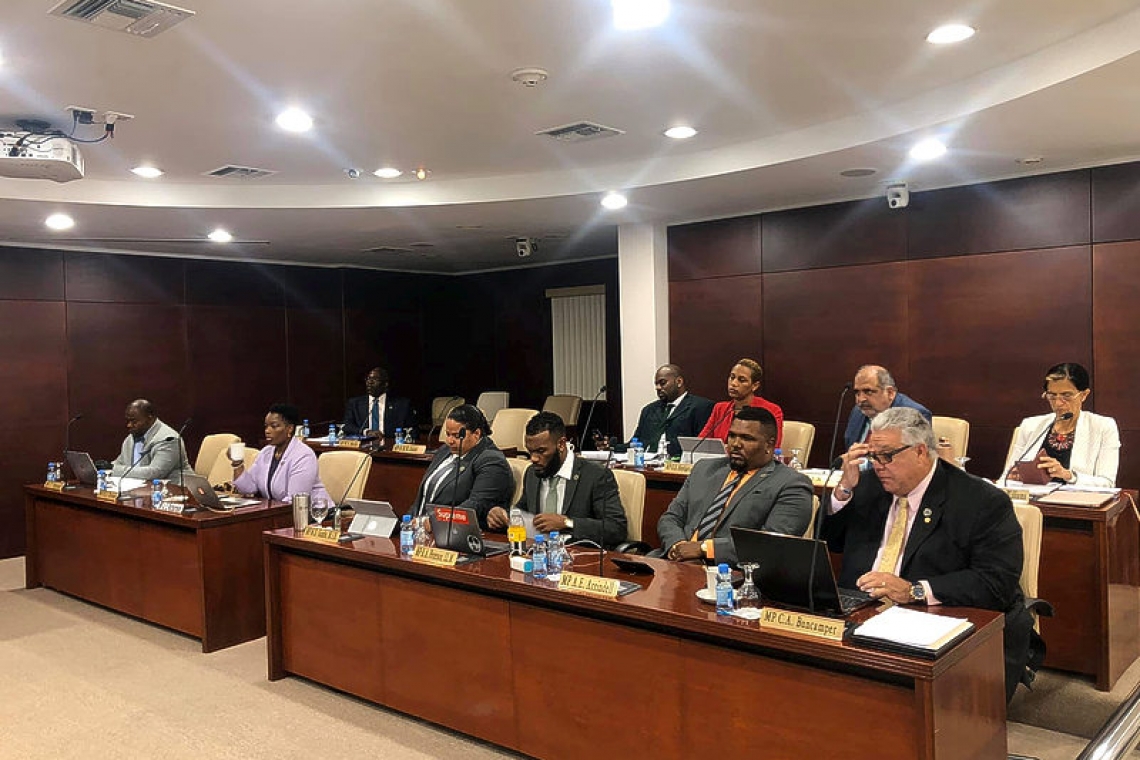 PHILIPSBURG--Members of Parliament (MPs) on Monday expressed concern about the coronavirus COVID-19 disease and posed a number of questions to Chairperson of the Emergency Operations Center (EOC) Prime Minister Silveria Jacobs, some of which were answered during the meeting.

United St. Maarten Party (US Party) MP Claudius “Toontje” Buncamper asked a number of questions in relation to how flights will function after the travel restriction in place as of today, Tuesday. He also expressed concern about students returning when the chances of infections in the US and Netherlands “is so great.” He questioned whether St. Maarten can handle a situation where students return infected and whether the country has the capacity to handle a 14-day mandatory quarantining of students. “Is government able to assist with this quarantine? Unless force is used nobody listens,” he stressed.

Buncamper said price gouging “seems to be a problem” in the country and he provided an example of a roll of six large toilet paper costing NAf. 28. He also asked what will happen now that the country is “closing down,” what will happen to the stimulus package and how much funds are available and can be expected from partners. “How much do we have as government that we can use? That’s the problem that we can tackle now. We need to see if we can cut in our budget... Whatever it takes to help because we will have to bridge the period very soon.”

Buncamper said his intention is not to create panic in the country, but to let everyone understand that “we will have rough months ahead of us. St. Maarten has a rough ride ahead of it – whether we like it or not,” he said, adding that the situation will put a dent in the Turnover Tax that government will receive. “How do we circumvent how to deal with these problems?” he asked. “I don’t expect government to singlehandedly solve this problem. Everyone has a role to play in this problem.”

He also touched on the issue of Spanish and Creole speaking residents and asked how information will get to them in their languages as well as the influx of persons from Venezuela via French St. Maarten. He said undocumented immigrants are not likely to report if they are ill.

National Alliance (NA) MP Anna Richardson asked a number of questions including at what time will government consider it appropriate to close schools and asked whether walkthroughs had been done at schools to check for things like adequate soap where handwashing can occur and whether there are dispensers for sanitizers, etc., amongst other things.

United People’s (UP) party MP Sidhart “Cookie” Bijlani asked how students will be affected if government were to resort to closing schools, what children are expected to do in their free time and how will working parents deal with this issue? He also asked whether there is a supply of COVID-19 kits in the country and urged authorities to ensure that kits are available. He also wanted to know how government will tackle the liquidity issue, how businesses will survive and what sort of “ease” will be provided to businesses, amongst other questions.

NA MP Rodolphe Samuel said St. Maarten is facing a challenge as it relates to undocumented immigrants in the country as they are not likely to come forward if ill. He said, however, that with connections and through communicating authorities might be able to determine where someone is when they are ill and they are reluctant to come forward. He also asked about testing kits and “breathing apparatuses,” which he said are critical when it comes to caring for ill COVID-19 patients.

UP MP Omar Ottley said the only way for St. Maarten to get through the coronavirus pandemic is with all stakeholders being involved. In a statement issued after the Parliament meeting, he urged the business community, schools and residents to continuously promote proper hygiene. He urged persons who are not feeling well to call their house doctor or CPS at tel. 914 for assistance. “Those who are indeed sick should self-quarantine to eliminate the risk of spreading the illness to others. The business community is asked to implement measures to test workers’ temperatures and be attentive for excessive coughing and sneezing of employees and walk-in customers. Schools are asked to make changes to their regiment to try limit the student cluster (such as) postponement of all assemblies, splitting of recess time on the playground and also notify parents immediately if their children are showing any signs of a cold or flu. Parents should also report to the schools if their children have been to any of the blacklisted countries within the past 21 days,” Ottley said.

“It is also our civic duty to report persons that may be showing signs or symptoms of the virus and refusing to get tested. We can only get through this if we fight together. Let us not be naive but instead work together to get past this pandemic,” Ottley said in his statement.

NA MP Christophe Emmanuel raised a number of issues and said he will be presenting a motion during the second round of the meeting.

UP MP Grisha Heyliger-Marten also raised several issues. In a press release issued after the meeting she said the community “must band together and pool our resources, intellectually, medically and economically, as this will determine what remains of St. Maarten when the dust is settled."

She is concerned about the management of information that is sent to the community. "I urge the government to ensure that it speaks with one voice and makes clear decisions. I would like you to consider everyone, businesses, visitors and residents when making these decisions and let my people know what is going to happen ahead of time." She said the four steps that have been given to explain to residents what to do in the event they have to self-quarantine needs to be expanded on to include things like how to get help if needed.

"It is not about if this happens, but when it happens, what are we telling our citizens to do. Let's be clear about this," said Heyliger-Marten. She is also concerned that the mediums used is not sufficient to reach the masses. "If this is about money, get assistance from the government-owned companies. Not everyone uses social media. We need to plaster the place with information about what to do when and if it occurs. Print flyers and posters in English, Creole and Spanish.”

She said information should be posted at gas stations, pharmacies and supermarkets along with bus stops where people stand so they can get the information on what to do and where to go for help.

She asked whether government "spoke to the hotels before imposing the ban to ensure consideration was given to guests inhouse. She also asked about the restaurants, bars and other service partners in the hospitality industry and what efforts have been made to reach out to them. She said the government should have already convened a meeting with the Central Bank on a strategy for economic recovery. “It is time for serious action she warns while stating that the local and international banks must do their part to ensure that the citizens of St. Maarten receive some economic relief in the weeks and perhaps months ahead.”

“We have continued to make business on our island cumbersome and no incentive for a situation like this has ever been considered. This pandemic (COVID-19) exposes the bottlenecks that are created by institutions such as the CFT which makes coming up with solutions for recovery nearly impossible. Reports indicate that cancellations at hotels are as high as 70 per cent. At the same time, workers are concerned over whether they will have a job, just months after resuming work since the two-plus years' hiatus brought on by Hurricane Irma in 2017. Many have raised concern about the possibility of price gouging by some local supermarkets.”