Moment of silence for accident victims, motorists are urged to use roads safely 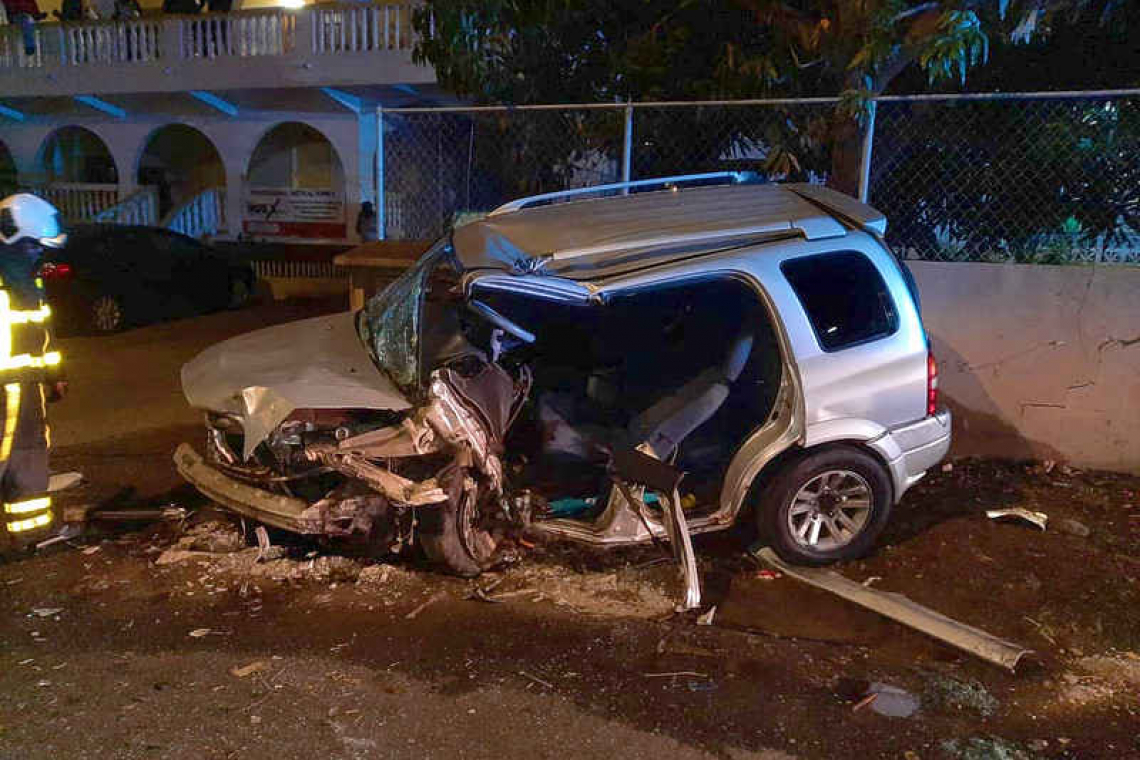 The scene of the accident.

PHILIPSBURG--Prime Minister Silveria Jacobs and Justice Minister Anna Richardson urged motorists during the live Council of Ministers press briefing on Wednesday to use the roads safely, not just for themselves, but also for others.

Richardson began her remarks by calling for a moment of silence for the two victims of the accident that occurred on Union Road in Cole Bay around 10:00pm Monday and claimed the lives of a four-year-old girl identified as N. Peterson and a man identified as Casner Lesperance.

The two victims, whom Richardson identified by name, were in different vehicles at the time of the fatal collision. According to the police, the woman driver of the vehicle in which the little girl was a passenger is in critical condition in St. Maarten Medical Center (SMMC).

Preliminary investigation by the Police Traffic Department into the fatal accident found that the woman driving a black Kia Forte had overtaken another vehicle heading toward Philipsburg at the same time that a grey Suzuki Vitara was coming from the opposite direction, resulting in the collision.

The two drivers and passenger were all extricated from the car wreckage by Fire Department personnel with the use of the “jaws of life”. All three were rushed to SMMC in critical condition. The little girl and the driver of the grey Vitara died at the hospital later as a result of their injuries.

During the press briefing Richardson urged drivers and motorcycle riders to use the roads safely for themselves and for others’ wellbeing.

Jacobs shared similar sentiments. “It is up to us. It’s not just how we use the road, but how we behave, how we treat each other, the impatience with which we treat each other on a daily basis. It’s a reflection of the country,” stated Jacobs. “So, I am asking the general public of St. Maarten: let us be who we say we are – the friendly island. That means also that we should be conscious of how our actions can affect others.

“Use the roads not just for yourself, but for others. The roads are not wide, they are not big, we are a small island. It’s difficult to expand the roads. There are not many sidewalks. … Look out for bikers as well. A lot of people are getting healthy. They are walking the streets, they are cycling, so the life you save may be your own as well as that of a loved one.”

She said it is a collective effort. She also called on motorists to recognise and respect emergency services. “I also see sometimes that the cars do not pull aside when these things happen, which could also cause accidents. The lives they are trying to save could also be your loved ones. So, I am asking for the general population – for us to raise our level of awareness of this situation to avoid further loss of life.”

She also drew attention to the way the island is being cared for, littering, and urged persons to desist from tossing garbage outside.

“Government pays quite well for garbage to be picked up, for roadside cleaning to be done and I think the pervasive attitude is that, ‘well someone is going to pick it up anyway.’ That is not what roadside cleaning is about. They are to cut back grass and brush, etc.

“So, we as a people need to take more pride in the way we’re handling waste on the island. We can do all the studies we want, place bins, bins are there. Keep a recyclable bag in your car to be able to take care of your trash and let’s keep St. Maarten clean not just for ourselves, but for future generations and for us as well.”

The St. Maarten Police Force KPSM, Richardson and Jacobs expressed condolences to the family, friends and loved ones of the two deceased.