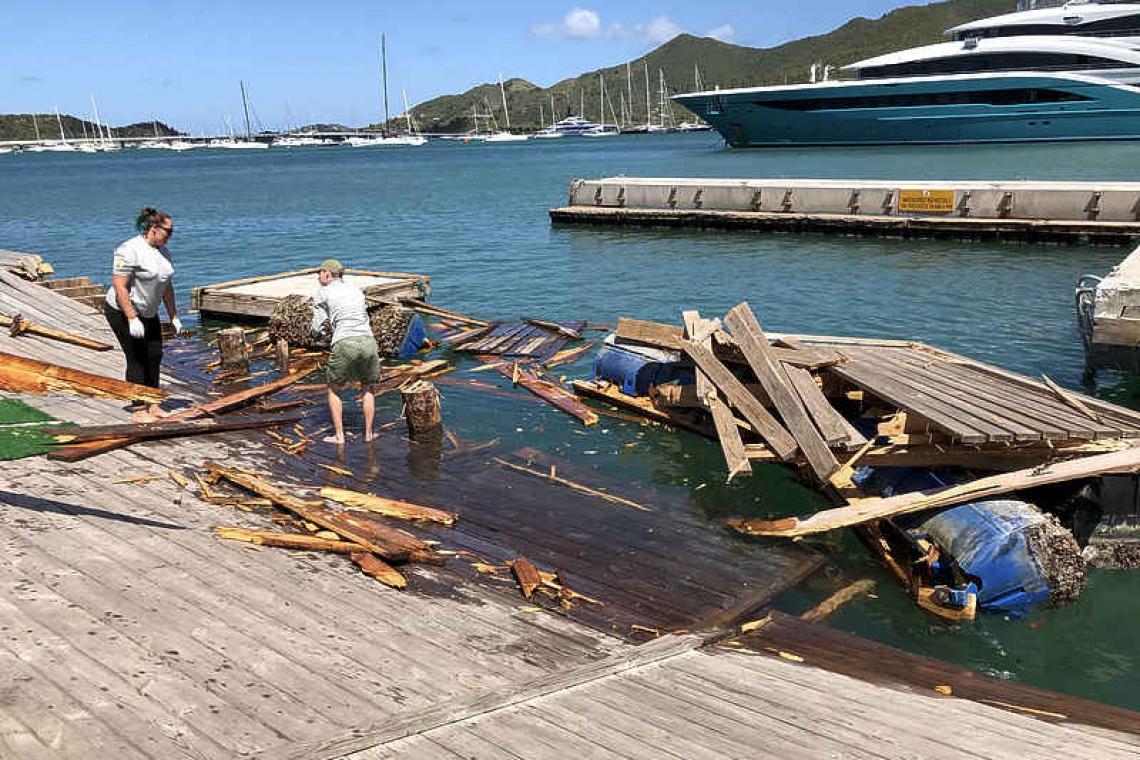 St. Maarten Yacht Club staff remove debris from the destroyed wooden dock at the Club. The mega yacht Go is seen in the background back in its berth at Ile de Sol Marina.  (Robert Luckock photo)

SIMPSON BAY—It was confirmed a computer malfunction on board the mega yacht Go caused the yacht to lose its steering as it was attempting to exit the Simpson Bay Lagoon from its berth at Ile de Sol Marina on Wednesday morning.  As a result, the mega yacht drove helplessly into the wooden dock of St. Maarten Yacht Club, destroying most of the wooden decking.

The accident occurred at around 10:15am.  It was not confirmed how the mega yacht returned to its berth at the marina, but it was thought the yacht’s tenders and other vessels would have pushed it back into the marina

Nobody was on the wooden dock at the time and no other injuries were reported, however the incident was witnessed by many, and videos taken.

Sint Maarten Yacht Club General Manager Michele Korteweg said the mega yacht was lining up to exit the bridge when it appeared there was some sort of engine failure. The loss of control meant the yacht collided with the wooden docks twice, the second time doing more damage.

A section of wooden dock leading to the outer concrete dock was also damaged.

“We’ve been removing all the debris and our insurance person has already been here to assess the damage, Korteweg added. We’ll have a structural engineer come over too to assess the damage. Hopefully we can be operational again soon but obviously this is a massive loss of income for the Club at an already very difficult time.”

The investigation will have to look at the planking installations and the integrity of the piles.

“If the piles supporting the structure are still solid and stable, it should be easier to rebuild. If that’s not the case we will have to replace the piles which could take months. But in the meantime, we will come up with a temporary solution in order to be operational as quick as possible, at least at the minimum to connect the wooden accessway to the concrete dock.”

Korteweg advised all marine passengers and visitors and provisioning people that the dock is not available until further notice until the new dock is safe and secure.

“For now, safety is more important than the rebuilding and we hope to get back to teaching sailing safely as soon as possible.

She envisioned about two months for everything to get back to normal.

“Funding is the big challenge for us and we don’t quite know yet if the yacht’s insurance will be helping us.”