K1 DIRECT returns from relief efforts in Haiti after earthquake 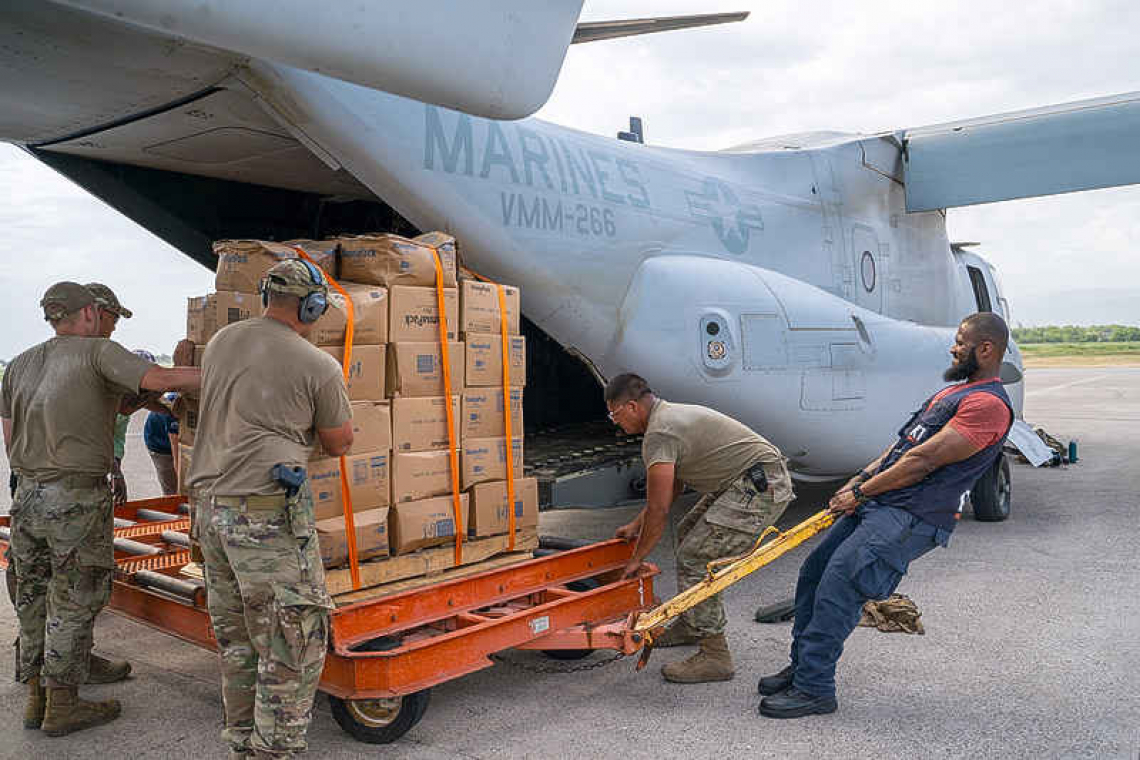 PHILIPSBURG--K1 DIRECT, K1 Britannia Foundation’s disaster relief and crisis team, has successfully completed its relief efforts in Haiti after the tragic 7.2 earthquake on August 14. A team of nine members from St. Maarten were deployed to assist, making themselves available to help wherever assistance was most needed.

The team’s relief efforts took place within the main areas of emergency logistics and the provision of personnel to load and offload much-needed supplies and equipment to affected areas. Based in Port-au-Prince, the team was able to help streamline and assist with managing emergency logistics at the Toussaint Louverture International Airport. This meant helping to manage flights carrying relief aid, supplies and personnel back and forth between the affected areas in the South and Port-au-Prince.

Due to the volatile situation on ground in the affected areas, travel by air was the safest way to move humanitarian aid, workers and equipment. On specific occasions, some of our team members joined the flights to assist with offloading of supplies and distribution at remote villages.

“The close coordination between our teams, as well as the dedication and can-do attitude of each individual, did not go unnoticed,” said WFP Haiti Country Director Pierre Honnorat. “Please accept a heartfelt thank you for your efforts – it made all the difference.”

In total, K1 helped to assist and coordinate over 200 flights carrying relief aid from Port-au-Prince to the affected areas of the south, helped load over 110,000 pounds of food supplies, hundreds of shelter and accommodation supplies, and much-needed items to set up a Sub-OSOCC (On-Site Operations Coordination Centre) in Les Cayes.

The team assisted with much-needed medical evacuations via helicopter from remote areas not reachable by road or larger planes. K1 also flew to the South to assess the damage and needs in various villages.

Samaritan’s Purse was assisted with the distribution of hundreds of emergency solar lights and tarpaulins, important for families with limited to no shelter and electricity. This was done via helicopter to remote villages.

K1 DIRECT’s Head of Operations said: “The deployment was a unique and challenging situation. It was unique because of the tasks we were entrusted with at the airport, and challenging because there were so many people in need and various circumstances made it hard to reach them. The Haitian people are some of the most resilient people I have ever seen. The experience was very rewarding.”

John Lyon, Chief Executive Officer (CEO) of World Hope International shared his appreciation for K1 DIRECT’s time in Haiti, stating: “I really appreciate K1: they have done a fantastic job, from brutal force, to loading Chinook helicopters, to sending in medic teams to the impact zones, to helping with logistics. What I love about K1 is the professionalism they have shown throughout the process.”

K1 Britannia Foundation would like to extend its gratitude to the various persons in Haiti, as well as in St. Maarten and internationally, who supported the team in numerous ways through accommodation, transportation, donations and encouragement that helped make this mission possible. “As we return back home in the peak of the hurricane season, ready to assist, we take a moment to celebrate today, September 6. This day marks the three-year anniversary of K1 DIRECT, our regional disaster relief and crisis team born out of the 2017 hurricane season, one year prior to the creation of the disaster relief and crisis team.”

K1 DIRECT assisted after Hurricane Irma in St. Maarten and Hurricane Maria in Dominica in 2017, after Hurricane Dorian in the Bahamas in 2019, with COVID-19 relief in St. Maarten throughout 2020 and 2021 and now after the 7.2 earthquake in Haiti. Over the past three years K1 has coordinated trainings with the United Nations and WFP amongst various medical and other training programmes to help strengthen the response capacity of not only our disaster relief team but also others in the disaster relief field in St. Maarten, as collaboration is a strong focus of K1 Britannia Foundation.

“As we celebrate the third anniversary of K1 DIRECT, which also marks the fourth anniversary of Hurricane Irma – a day which we will never forget – we look back with gratitude for the lessons we’ve learned, how we’ve grown and the impact we’ve been able to make as a result,” said Priya Thirumur, Vice President of K1 Britannia Foundation. “We look forward to being prepared and ready to assist when future disasters and crisis situations arise.” 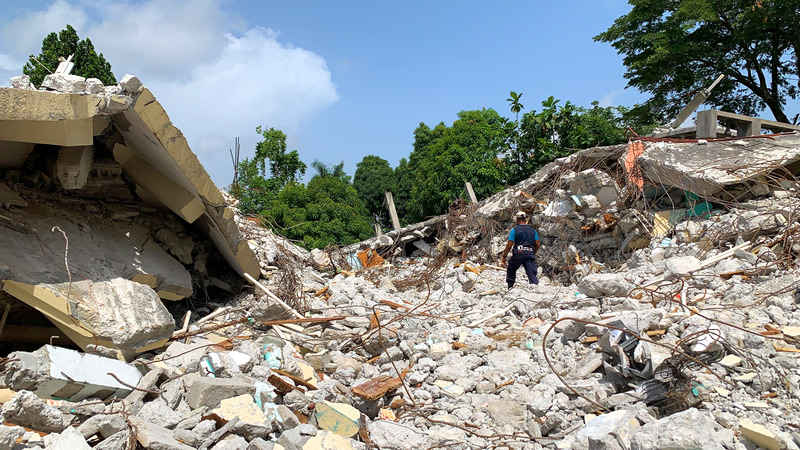 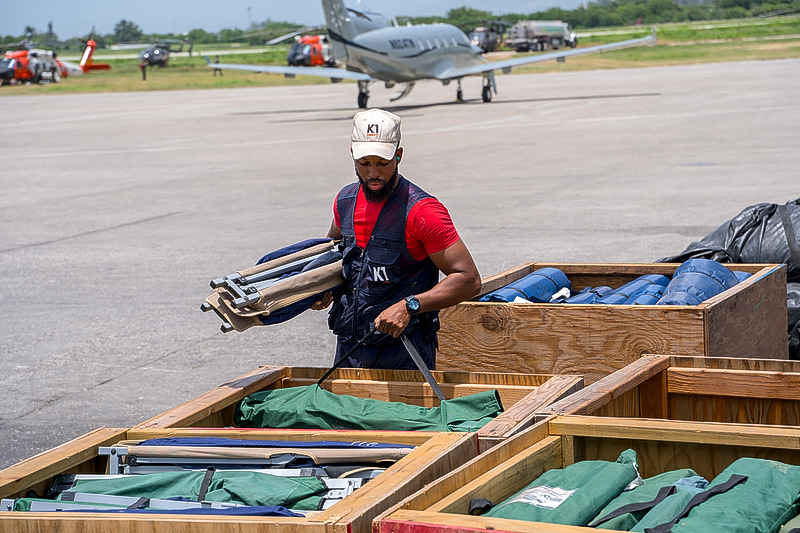 Preparing shelter supplies to be loaded. 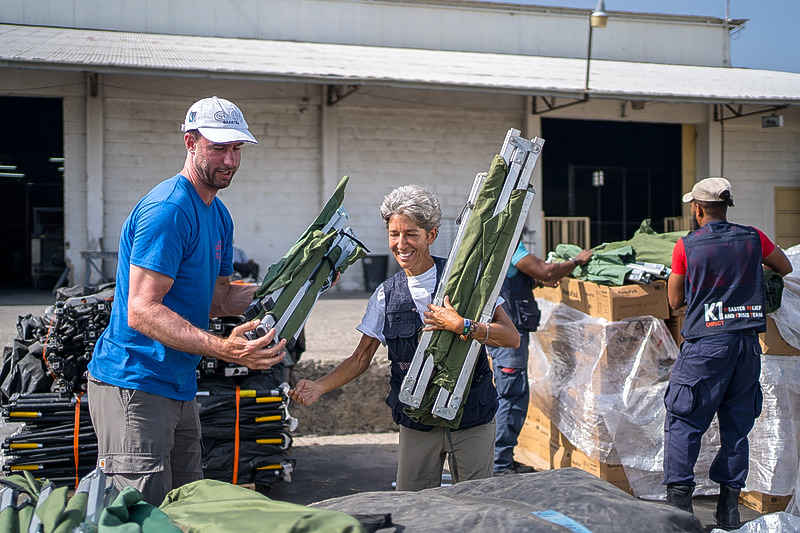 Loading tents into US military planes for distribution to people who lost their homes during the earthquake. 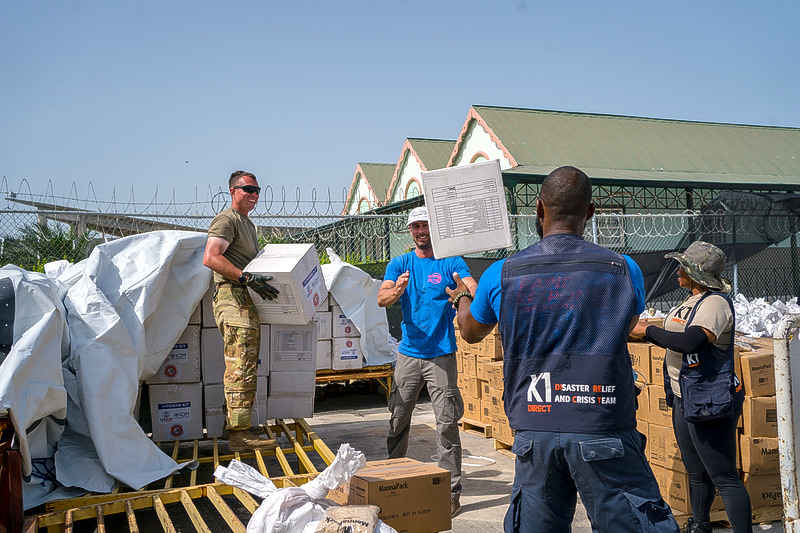 Loading hygiene kits for families in need with the US Military and Rapid Response.