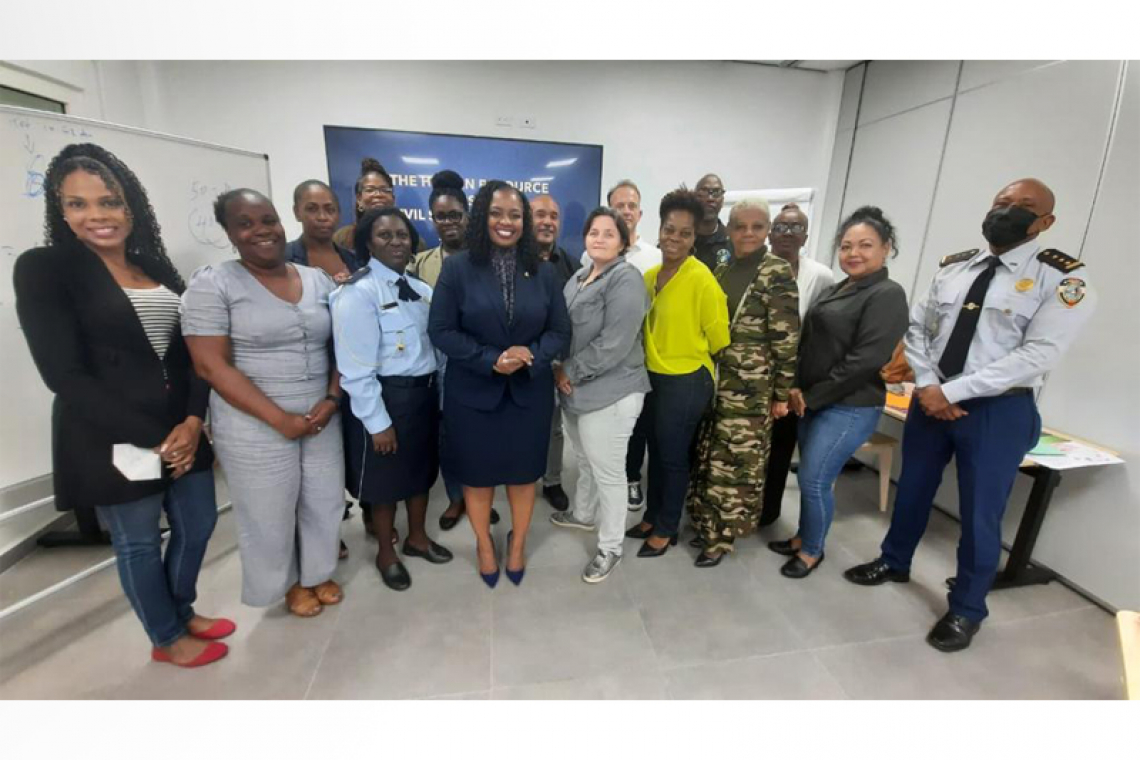 PHILIPSBURG--Minister of Justice Anna Richardson visited a four-day workshop on “Civil Servants’ Rights and the Advising Process” in which Ministry of Justice personnel advisors participated. “This workshop came as a step forward in improving the Ministry’s personnel affairs processes,” Richardson said.

The workshop was held April 19-22. “The training dealt with the issues that affect [the ministry’s – Ed.] most important asset; its employees,” Richardson said. “The safety and protection of the St. Maarten community greatly depend on the efforts of the civil servants in the ministry. Since taking office in 2020, I have been focused on improving the various issues that have plagued this ministry for more than 10 years.”

Concerns regarding the existing staff and further staffing are being addressed with the completion of the ministry’s function book, which has now been published, Richardson said. “I am in dialogue with the unions in order to regulate the legal position of KPSM [St. Maarten Police Force] and the National Detectives, and their new salary scales.”

Richardson said her staff has been working diligently to fill numerous key positions in the various departments. Among these are the recruitment and selection of professionals for Victim Support Services (VSS), the further processing of the organisational plan for the Executive Protection Unit (EPU), and the completion of training for 12 certified Customs officers who were sworn in on April 22.

Richardson said: “KPSM has seen an increase in the police force over the past two years via the training and certification of their recruits, a practice that continues at present, and training for Point Blanche prison guards is expected to begin in June 2022.

“Critical professional development projects are also being prepared to train personnel of various sections of the Immigration and Border Control Services and, in the interim, training qualifications required to recognise several educational programmes formally are being reviewed.”

According to Richardson, the workshop for the personnel advisors is the beginning of a new approach whereby cooperation between the executive services is being improved. Working in teams from the different departments will allow staff members to learn from each other and make better use of the power of collaboration, she said.