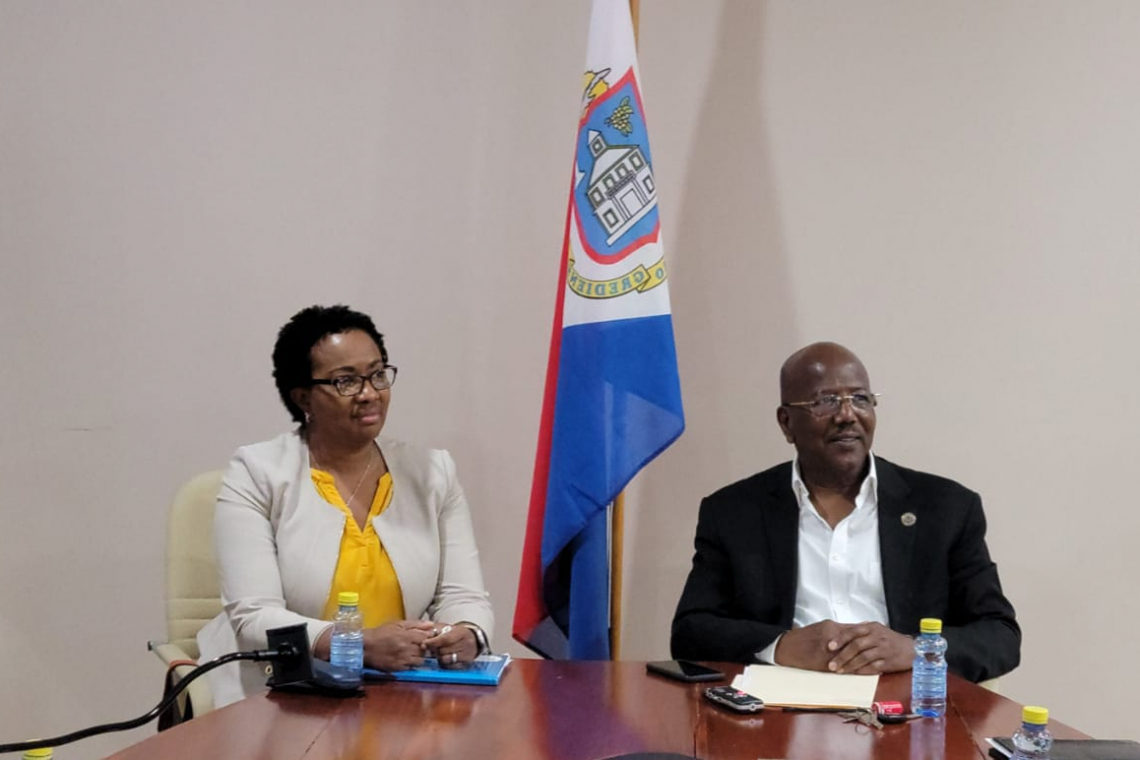 PHILIPSBURG--National Alliance (NA) leader Prime Minister Silveria Jacobs and the party’s faction leader in Parliament William Marlin held a joint press conference on Thursday to set the record straight and address some of the inaccuracies that are being peddled about the Caribbean Body for Reform and Development COHO.

Jacobs said that in 2020 the Netherlands proposed an entity to regulate and monitor expenditures and assist in the island’s sustainable development. While St. Maarten agreed that certain reforms were necessary, the country did not agree with the proposal made for COHO in July last year. St. Maarten indicated that the authorities of COHO were too far reaching and made a counterproposal. She also alluded to the change in the name of the entity from CRE to COHO.

The entity was being introduced as a prerequisite to continue receiving liquidity support. Jacobs said the countries did not agree with the manner in which it was done, indicating that it was more than a proposal and was more of a forced consensus that had been accepted as the islands were no longer able to financially sustain themselves.

Since December, government’s administration under the Secretaries-General Platform has been working with each ministry to realise what St. Maarten sees as objectives in line with the country package proposal from the Netherlands. The Council of Ministers approved an implementation agenda for the country packages last week.

Jacobs said that while Parliament had “insisted” on a meeting that included discussions on the COHO, it was not yet at a stage to be discussed.

She said the people of St. Maarten need to understand that there is a trajectory for legislation, specifically legislation that pertains to the entire kingdom. Once it leaves the Kingdom Council of Ministers, it goes to the Council of State for advice. Once this advice is rendered, the Kingdom Council of Ministers makes changes based on the advice, following which it can be debated in the Second Chamber (St. Maarten’s equivalent of Parliament).

The COHO is currently at the stage where advice has been rendered. St. Maarten Curaçao and Aruba have an opportunity to give input before the COHO is sent to parliament for debate.

Jacobs said that since the advice has been leaked, the countries in the Kingdom have decided to publicise it and the advice has since been shared with the various parliaments. The law itself was also shared. A discussion will now be held at a governmental level to determine what the follow-up report will be. This meeting is scheduled to start today, Friday.

St. Maarten had requested an extension for the meeting, but Jacobs said she had not received a response up to the time of the press conference, so the meeting is likely to proceed.

“I believe that Caribbean countries, we are stronger together,” she said noting that it had been stated since last year that the manner in which the COHO came about was not a real consensus, that the authorities proposed for the COHO were far-reaching, and that St Maarten will only agree with something that does not infringe on local, kingdom and international laws. “That has been made clear,” she said.

“We are at the negotiation point once again and as St. Maarten we will continue to fight for the rights of our people that we get the reforms that we need, but without the top-down manipulative approach.”

Marlin said certain Members of Parliament (MPs) are trying to mislead the public by constantly issuing press releases bashing the Prime Minister, government and the coalition, claiming to be “standing alone” and “fighting for the people.” However, Marlin said that it is not correct that the MP in question had been the only one.

He said all 15 MPs on July 8, 2020, unanimously adopted a motion rejecting the COHO after hearing from Jacobs that to obtain liquidity support the country had to give in to the entity. He said it had been agreed that the process continue, for St. Maarten to receive liquidity support.

He said now, almost nine months after the entity had been introduced as an idea, the Council of State has issued an advice, which has been leaked. Marlin said this advice vindicates St. Maarten, Curaçao and Aruba, as the advice mentions the same issues that the islands had been objecting to.

Marlin sees the proposal as an alternative government rather than Parliament retaining its right to call government to order and to question the administration. The idea of helping St. Maarten financially, technically and with advice is supported, but “to take over” and establish an entity that reports in The Hague to the Minister of Home Affairs and Kingdom Relations “is going too far.”

He made clear that Parliament could not have debated the COHO before, as it was not yet at the stage to be debated. It is now at a stage where an advice has been rendered and before it is sent to the Dutch parliament for debate, St. Maarten, Curaçao and Aruba would need to have a discussion on it. This has not yet occurred.

Marlin was critical of some MPs’ making it appear as though Jacobs had been hiding information and that she did not want to give the Council of State advice to Parliament. He said Jacobs had represented St. Maarten the way a mother would represent her children and ensure that they are fed.

He said if the 14 other MPs so-called “stood alone” as one MP is purporting to be doing, then St. Maarten would not be able to pay salaries, including those of MPs, and the various SSRP support programmes would not be possible.