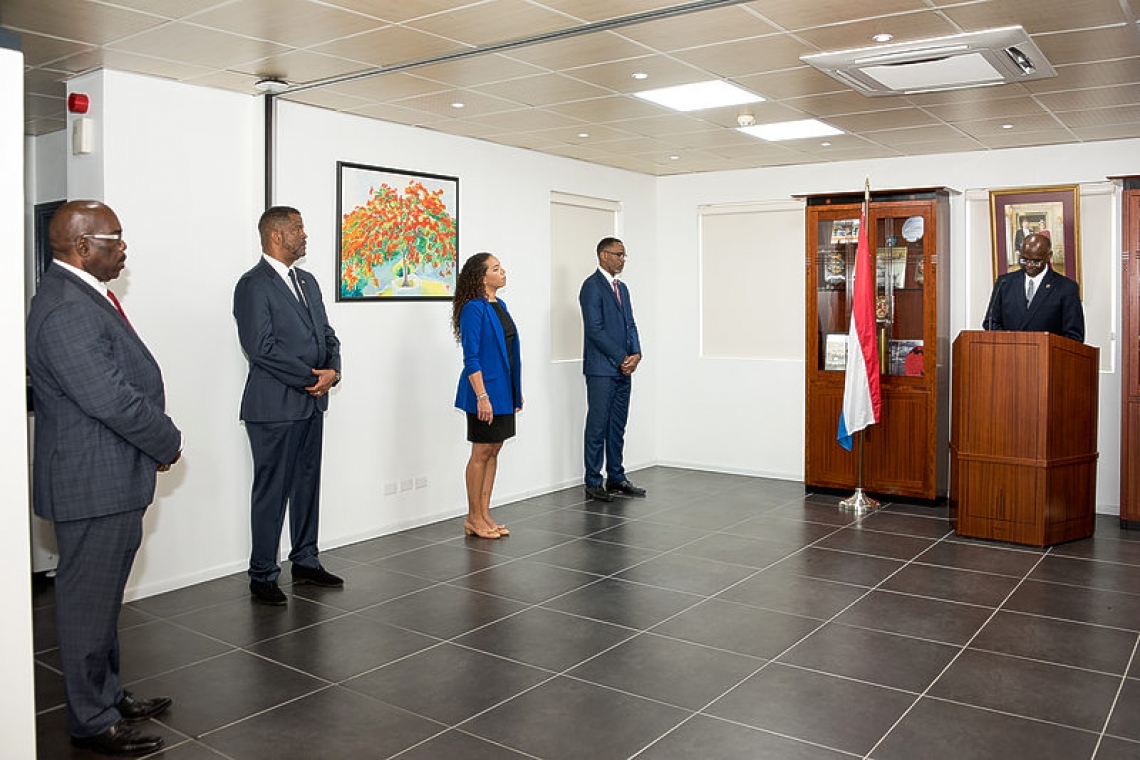 HARBOUR VIEW--Governor Eugene Holiday urged the newly sworn-in government on Saturday to take up their roles with a united sense of urgency.

“You are … assuming office under extraordinary circumstances,” Holiday told the new ministers during the swearing-in ceremony held at his cabinet. “I therefore hereby encourage you to take up your mandate with a united sense of urgency, one anchored on the principles of solidarity, consultation and cooperation with our people, with our health sector, with our businesses and with our partners in the north, in the region and in the Kingdom.

“This will provide and foster the support necessary to effectively contain the disease, limit its socio-economic consequences and ultimately secure the well-being of our people.”

Holiday said that considering the magnitude of the challenges facing the country, it is imperative that government continues to work to secure the confidence necessary to raise the required funds to cushion the economy.

He listed essential priorities as being continued coordinated public health measures to contain the coronavirus COVID-19; the overdue approval of the Penal Procedure Code to address the risks of a Financial Action Task Force (FATF) blacklisting; the approval of the 2020 budget as part of government’s commitment to sound budgetary and financial management practices; and the roll-out of a comprehensive socio-economic recovery plan  to offer the support residents and businesses need for an effective socio-economic recovery.

Holiday said a lot has changed in just over 10 weeks since January 9. The world and island are facing an extraordinary global human and economic crisis caused by the COVID-19 pandemic. The crisis comes amidst the economic recovery and budgetary challenges the country faces due to the impact from Hurricane Irma and amidst the risk of St. Maarten being blacklisted by the FATF, amongst other things.

“This crisis requires a public health and socio-economic policy response that exceeds the available resources of our country. This, however, does not mean that we cannot and will not build the resilience to overcome this challenge; on the contrary,” he said.

He said the coronavirus COVID-19 pandemic reminds the country now more than ever that it is interconnected across continents, across countries, across the Kingdom and across and within borders.

“We are reminded that each of us is responsible for the well-being of our brother and our neighbour. We are reminded that the people of this island are in this together. And as a people we are called upon to follow regulations and to act socially responsibly to protect each other and the most vulnerable among us.

“We must stand in solidarity with the residents of our island during these trying times. I would therefore like to take this opportunity to express my immense gratitude to our committed men and women on the front line of this crisis and, in particular, to our health care professionals for their devoted service,” he said.

“As you assume your mandate to govern our country in these exceptional circumstances, I trust that you, in keeping with your oath, will work in solidarity, consultation and cooperation with our people, with our health sector, with our businesses and with our partners and thus overcome our challenges to safeguard the well-being of our people. In that regard, there rests on you, individually as ministers and jointly as Council of Ministers, a great responsibility.”

He told the ministers that their decisions would have a lasting influence on the lives of the people of St. Maarten. “Thus, as you deliberate on taking action on the matters before you during your governing period, I wish you wisdom, individually and jointly, in the conduct of your responsibilities as you seek to meet your constitutional responsibility to the people of St. Maarten.”

The electorate in St. Maarten went to the polls on January 9 to elect a new government. On January 16, based on the results of the election, Jacobs was named formateur to form a new government following the governing accord signed by National Alliance (NA) and United People’s (UP) party representing a majority in Parliament.

Holiday said the formateur had initiated the screening process for candidates on January 27, based on the regulations regulating the pre-screening of candidates before nomination.

The screening was completed on March 17. And on March 26, having addressed the outcome of the screening, Jacobs presented Holiday with the candidate-ministers and candidate minister-plenipotentiary supported by a majority in Parliament for appointment and swearing-in.

“To all who gave their input to the formation process I hereby, also on behalf of the people of St. Maarten, express my appreciation. And in particular, I wish to thank Ms. Silveria Jacobs for her work as formateur,” Holiday said.

He also congratulated the newly sworn-in ministers and minister plenipotentiary.