Gendarme out of danger as controls to be reinforced 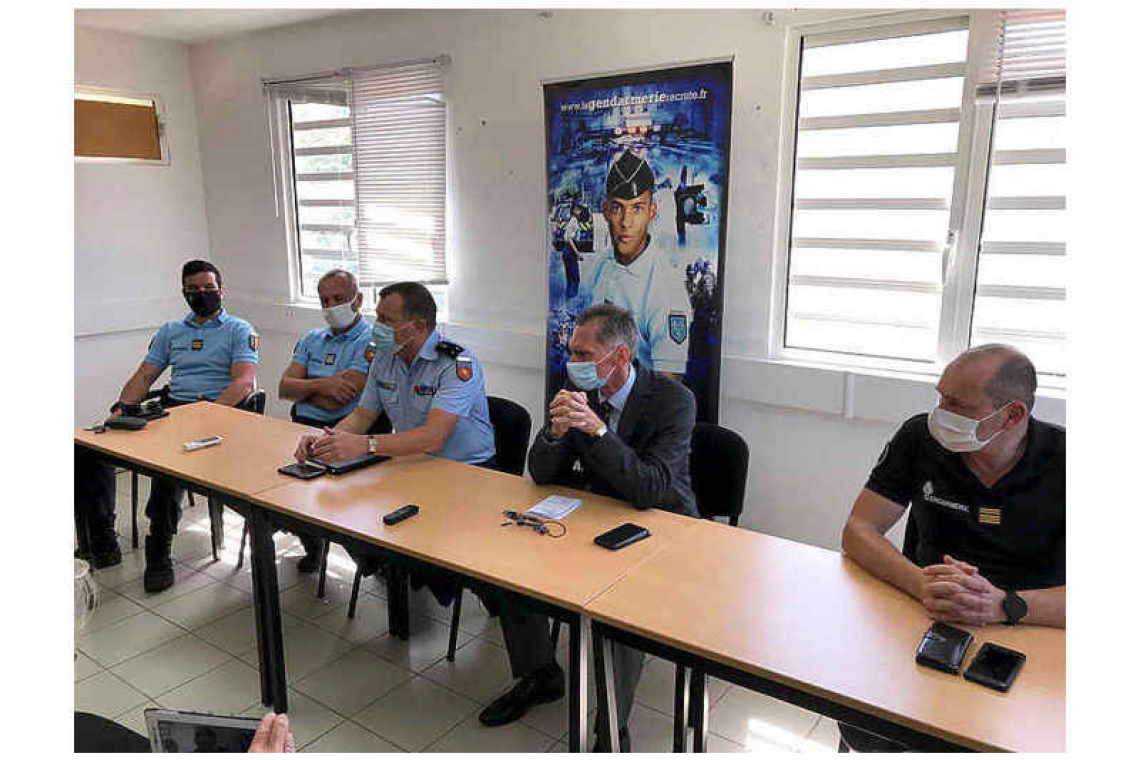 MARIGOT—Despite head injuries the Gendarme who was struck down by a speeding moto cross bike at the Bellevue roundabout on Sunday evening is not in danger of losing his life and will recover, it was explained at a press conference in the Gendarmerie Monday morning. He will still be under observation for another 48 hours.

The press conference was convened with the presence of General Thierry Renard, head of the Gendarmeries of Guadeloupe, St. Martin and St. Barths, and Préfet Délégué Serge Gouteyron. Renard had travelled especially to St. Martin to support Commandant Stéphan Basso.

According to the Gendarmerie report Sunday evening an estimated 30 riders on two-wheeled vehicles entered Marigot from the Grand Case direction and rode the wrong way up Rue de Hollande before passing the Bellevue roundabout.

It was there that one of four Gendarmes at a check point was deliberately knocked down as the group passed, Renard said, adding the perpetrator did not stop but continued to the Dutch-side border with the rest of the group.

The victim, a married man with two children, was transported to the Louis-Constant Fleming Hospital in serious condition however despite evidence of slight bleeding in the head, scans did not show any fractures or injury of a more serious nature.

Renard recalled the incident some 15 years ago when a Gendarme was killed on the RN7 between Bellevue and Cole Bay by a motorbike that was taking part in a drag race.

Préfet Délégué Gouteyron appealed to the conscience of the perpetrator to give himself up to the Gendarmerie, to make it right and apologise to the injured Gendarme “in the spirit of the Friendly Island.”

He added the island will be in danger of losing its attractiveness for tourism if this kind of wild behaviour continues. However, it was noted if the perpetrator is a resident of the Dutch side, an extradition proceeding would have to be agreed on between the respective prosecutors.

To date no arrest has been made. The investigation is relying on video and witness testimony and cooperation with the KPSM on the Dutch side.  Commandant Basso and General Renard announced reinforcement of controls will be implemented immediately.