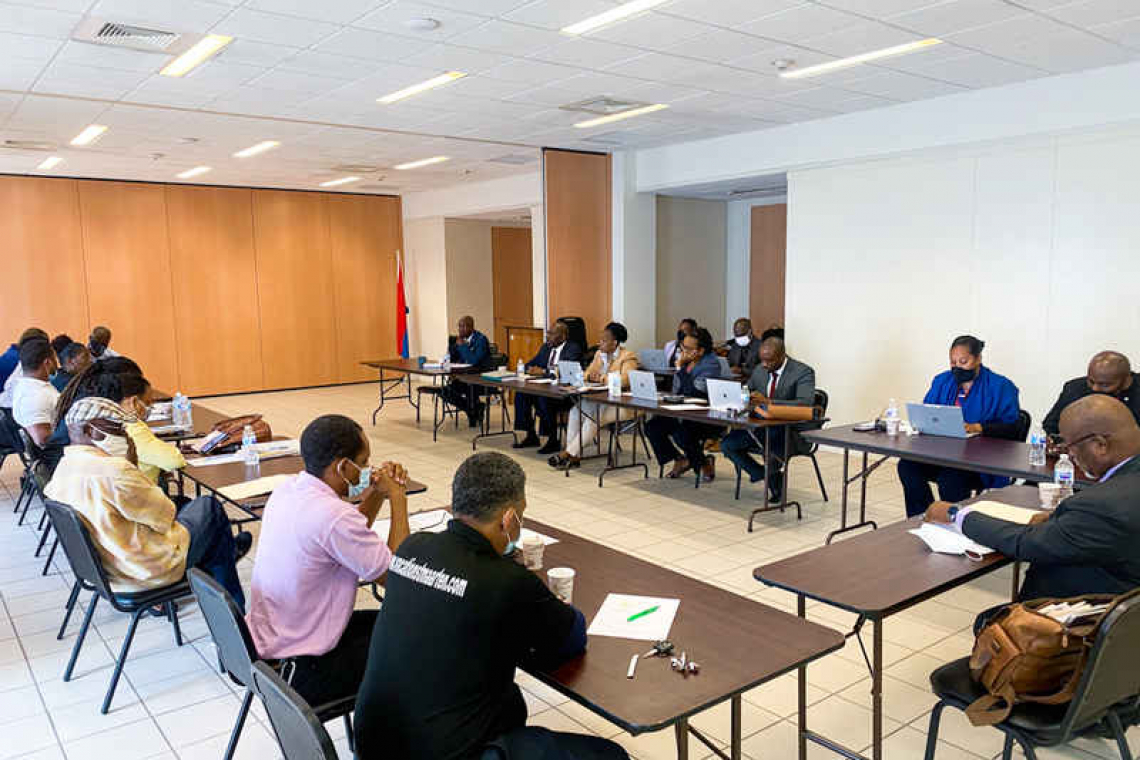 Representatives of the Council of Ministers and the three unions during their meeting.

PHILIPSBURG--The NAf. 3.5 million needed to pay out the three per cent vacation pay to civil servants, which represents 50 per cent of what was withheld from them in June last year, needs to be sought financially elsewhere. “This requires further discussion with parties (unions and government),” it was stated in a joint press release from government and unions under the Committee for Civil Servants Unions (CCSU).

Government intends to pay out the three per cent (50 per cent vacation pay) as soon as calculations are finalised to execute the payment. The intention is also to agree to pay out the balance of the six per cent (full vacation pay) owed for 2021 in two equal tranches every three months. However, this depends on when liquidity becomes available, it was stated in the release.

Prime Minister and Minister of General Affairs Silveria Jacobs, along with Ministers Anna Richardson (Justice), Ardwell Irion (Finance), Rodolphe Samuel (Education, Culture, Youth and Sport) and Omar Ottley (Public Health, Social Development and Labor) met with CCSU members WICSU/PSU, WITU, ABVO and NAPB on Tuesday, June 29, when this information was discussed. The meeting was on the invitation of government to ensure inclusion.

During the meeting, the Ministers and the union representatives were allowed to explain their positions on the 12.5 per cent cost-cutting measures on the employment benefits, determine the way forward and to present a joint press release of “the positive meeting.”

The union representatives were informed that government had done all to fulfil its agreements with the government of the Netherlands to receive liquidity support while awaiting the Constitutional Court decision on the Ombudsman’s petition, but liquidity remains a challenge. Government’s intention is to ensure payment of salaries in full, although there is limited liquidity available; even with the recent fifth tranche, liquidity support of NAf. 39 million remains a problem.

“The challenging reality of the present situation is that should the laws pass the scrutiny of the Court and be enacted, then the legal basis will lead to a situation where calculations would have to be reviewed and the vacation pay that was received will need to be repaid. Nevertheless, the unions and ministers have agreed to return to the table to discuss possible options to realise the cuts as well as after the Court’s decision,” it was stated in the release.

Parties present highlighted the importance of continued transparent communication and agreed on a previously-presented proposal to have quarterly meetings and even separate committee meetings depending on the subject at hand. Parties also agreed to meet once the Constitutional Court’s decision is made to discuss the consequences thereof and the way forward.

Parties look forward to the Constitutional Court’s ruling so that clarity exists for all concerned.