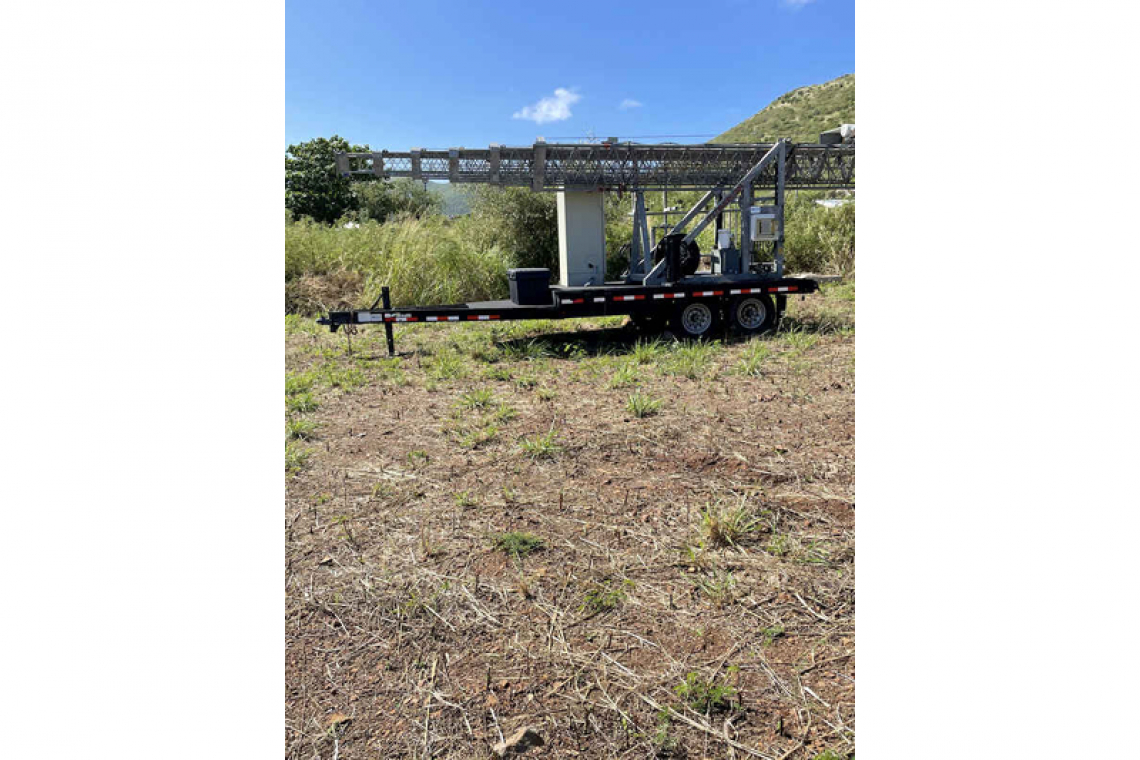 What is believed to be a 5G mast on a trailer on Gumme Celler Road, across from Yvette’s Restaurant in French Quarter.

MARIGOT--The French Quarter community has stepped up its protest against what it says is an over-abundance of cellular masts in the district, citing potential consequences on health and questioning why telecommunication companies cannot be transparent with the community on their plans, and why the relevant departments of the Collectivité have not responded to complaints.

The issue has already been of concern in French Quarter for a year now, but overshadowed by the COVID-19 crisis during most of 2020. A petition against erection of more cellular masts garnered some 3,000 signatures, while the visit of French Minister of Overseas Territories Sébastien Lecornu in St. Martin on January 3 presented an opportunity to submit a complaint letter.

Fresh concerns were raised over the sighting on Christmas Eve of an alleged 5G mast sitting on a trailer apparently due to be erected on a plot of leased land in French Quarter.

“Why does there have to be so many cellular masts in French Quarter? On Mullet Fish Road there are about four or five of them, and there are two next to the schools,” community spokesperson Patricia Helliger told The Daily Herald.

“We are very concerned about the dangers to health from radiation. We expressed our concerns to the district council which in turn notified the different entities in government of the concerns, including President Daniel Gibbs and Service Urbanisme, in November 2019, but there have been no responses.”

Helliger, who initiated the petition, said she was surprised to be informed there are 18 cellular masts in French Quarter. While this could not immediately be verified, she insists telecommunication companies must come out and convince the people that these masts are safe or that safety protocols are in place to protect children, prevent cancer and other illnesses.

She could not say whether any permits have been issued. She noted a community in Orient Bay had successfully resisted installation of a mast in their area, which was then installed elsewhere.

“It seems it is all being done in an underhand way by these companies, as they don’t want to have a conversation with us,” Helliger reasoned. “We can’t stop technology and know that 5G is coming in the future anyway. But we don’t understand why there has to be so many masts, why one community has to be saturated with them.

“Why not have one giant mast on the top of a mountain, away from residential areas? We know why that can’t happen – because it costs a lot of money to cut a road up the mountain and then have a helicopter transport the mast up there. These companies have got away with it up to now, but it’s enough. They need to come together and give us assurances of safety.”

According to Helliger, there have been reports of various illnesses in French Quarter, including headaches, sleeplessness, heart problems, cancer, but she acknowledged it has not been proven that cellular masts were the cause.

Responding to the complaints, Dauphin Telecom Director-General Eve Riboud said five mobile phone operators have masts in French Quarter and the reason there can be a lot of masts in one area is because of the demand for connections and service in a community that has a larger population than people realise.

She explained that local operators in St. Martin are merely technicians that are licensed to deploy the technology and frequencies provided by the national regulatory agencies, but do not choose or select.

“When you have a large population, you need more masts, and fewer masts for a smaller population. It’s as simple as that,” she explained. “If there is a mistake then it’s a national government mistake or choice. Again, this is not our choice, and it works the same way on the Dutch side.”

The two regulatory agencies are Autorité de Régulation des Communications Électroniques et des Postes (ARCEP) which regulates the operators and L'Agence Nationale des fréquences (ANFR) the latter being the one to address questions or concerns on its website. Both sites are in English and French.

“On the ANFR website you can submit a concern and a team will investigate. A technician comes here from Martinique all the time,” Riboud said. “The regulations are strict and clear, so there’s no way you can do anything crazy. ANFR conducts controls on all operators every year.”

She said 5G will be deployed in St. Martin at the end of 2021 or early 2022, confirming President Macron’s commitment to have 5G in all of France.

“Social media is largely responsible for driving these concerns and misinformation. It was the same with 2G, 3G and 4G,” she noted. “Are we more sick now than before because of cellular masts? I don’t know. But in my opinion the technology is much better now. The equipment in use today is using 100 times less energy than before.”

Riboud agreed that in a perfect scenario it ought to be possible for local operators to share cellular masts despite the engineering work involved, thereby reducing the number of masts deployed. In fact, local government has already started to look into this.