Franco reflects on tenure in office 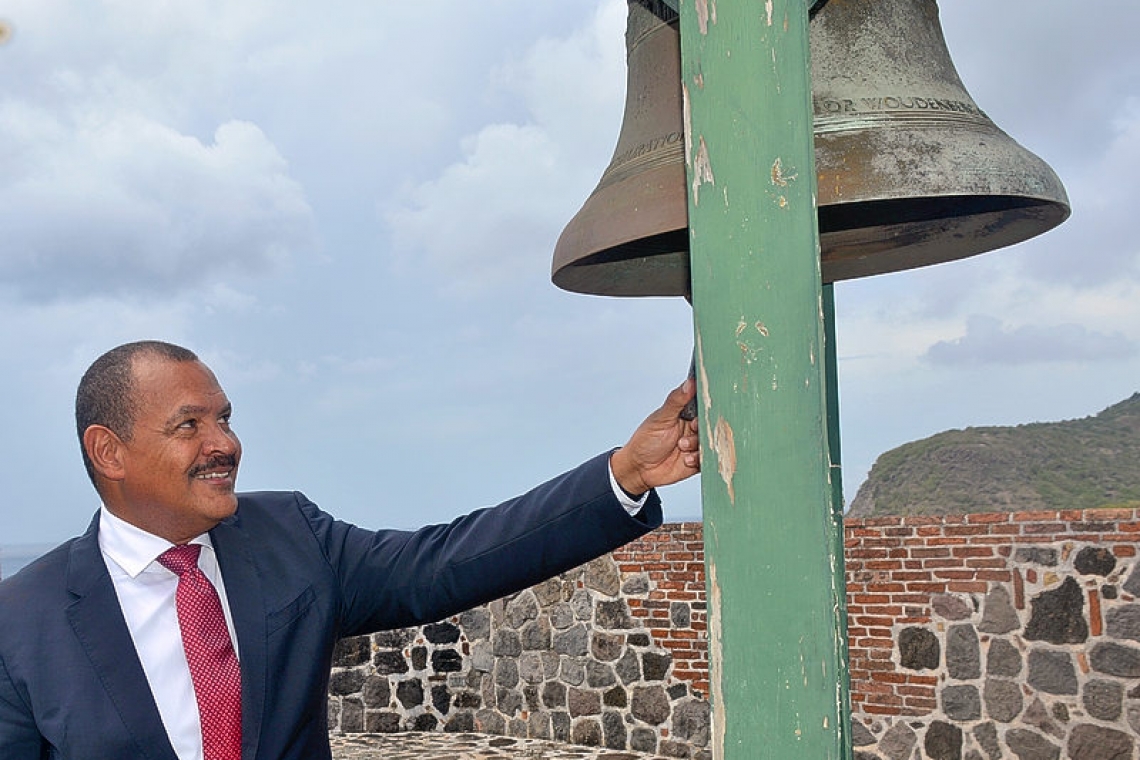 ST. EUSTATIUS--Former Commissioner for St. Eustatius, Marcolino “Mike” Franco said his mission in St. Eustatius since he took up the post in February 2018 had been one filled with challenges. In reflecting on his tasks, he said some of these challenges had been easy to overcome and others were a work in progress.

“To be totally honest, when I was appointed by State Secretary, now Minister for Kingdom Relations Raymond Knops, I was quite unaware of the size and nature of the hurdles ahead of me. Balancing all the responsibilities of the former Executive Council, Island Council and Island Governor has not been easy. And I am delighted that I had Mervyn Stegers to share in the division of tasks,” he said.

Marnix van Rij was officially sworn in this week to succeed Franco.

“Looking back, my early days were characterised by a mess in the area of finances, a civil service administration in need of restructuring, poor communication between the Golden Rock and The Hague and a crumbling infrastructure. But neither Knops nor I could foresee the greatest winds of change until [Hurricanes – Ed.] Irma and Maria blew in from the Atlantic. We came in after the hurricanes.

“So, what have we done? Finances and financial reporting are back on track. We have introduced a practical and efficient bookkeeping system called AFAS that keeps every department online and in line with revenue collection and budget spending. We know in real-time what is being spent and we control it.”

He said local government expenditure has been around US $16.5 million over the last five years. That service level has been maintained with the exception of subsidies allocated for infrastructure renewal, hurricane repair and the reinforcement works of Fort Oranje. The latter project alone amounts to $10 million.

Franco said the 2019 annual figures would be published once fully certified by the end of 2020. Budget for this year’s round of spending is almost $37.5 million.

Looking to the state of the civil service administration, Franco is upbeat.

“Many roles and rules have been changed. In the past, purpose and performance were sometimes shaped by party politics and even family ties. St. Eustatius is a small island. Nevertheless, we have some great talent and skills within our human resources. Admittedly, we had to parachute short-term contract staff from the Netherlands to help with the workload. But today, we currently employ 160 staffers whose motivation and teamwork is much enhanced.

“Nobody can work in a vacuum and I would like to thank members of our Advisory Board for their feedback over the last two years. Members were personally selected for their interaction with the Statia community and their ability to express such an opinion. At times, their expectations may have exceeded our resources, yet their genuine enthusiasm and voices were highly valued by all of us at Town Hall.”

Franco said low attendance and emigration means that five new members will be chosen by his successor, Van Rij to serve on the board. At least 17 candidates have already applied for such community duty.

Communication with the various Dutch ministries has improved somewhat, but Franco admits that distance does not always lend enchantment. “I have had to sit on the fence many times to navigate a positive outcome. I can feel and understand the frustrations of the past.”

Franco (extreme right) observing the concrete being poured on the roadwork carried out at the White Hook area by the St. Eustatius government Public Works Department. 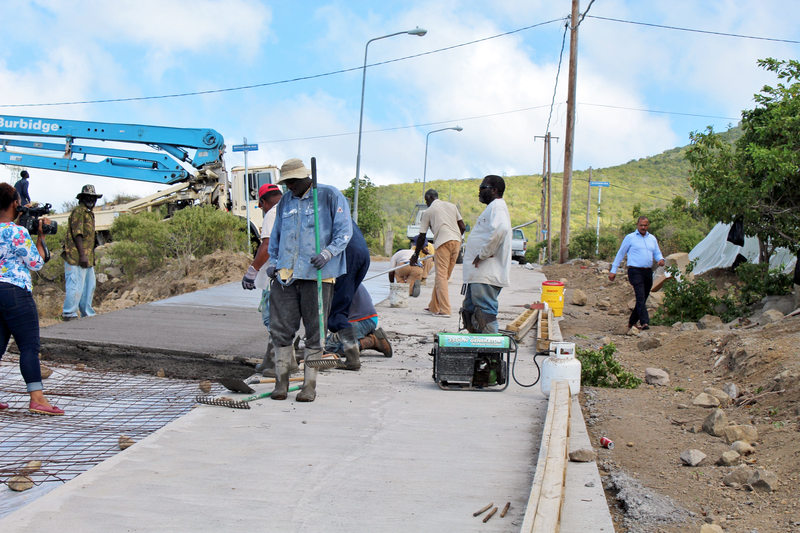 Such frustrations have led to serious delays in the island’s infrastructure programme.

“The Dutch are masters at proceeding with caution and precision. Nevertheless, I can report that the last consignment of car wrecks will shortly leave our shores and that the waste management plant is in full recycling mode. The island is looking smarter and smelling cleaner.

“We have already started to harvest more rainwater for our farmers through excavating new ponds and renovating old infiltration ponds. Road drainage systems are also redirecting the flow to avoid erosion. Such erosion is not kind to our marine ecology. I am therefore extremely delighted that last June we signed a 10-year management agreement with [St. Eustatius National Parks Foundation – Ed.] STENAPA to maintain and manage the National Parks.”

He said Jeems Road would be completed by the end of April. Its completion will provide an alternative route to the airport while Mansionweg is upgraded. Undivided property in St. Eustatius is such that authorities have just signed the last of seven contracts to use the land to widen this road.

Franco admits the Cherry Tree Road scheme was not handled well by all parties. However, he said residents would appreciate the realisation of its first phase before June this year.

“Construction of the new airport tower and terminal are in full swing and on schedule for official handover by the year-end,” Franco said.

Curaçao and the family business now await Franco’s return. Asked whether he would consider another senior Dutch Kingdom appointment, he replied that he is always open to persuasion. “I have to say I run to and never from. My length of service was extended once already and my family and I are ready to press the reset button. St. Eustatius and its community will persist in my thoughts. It is a truly beautiful treasure and its heritage is full of potential,” Franco said.