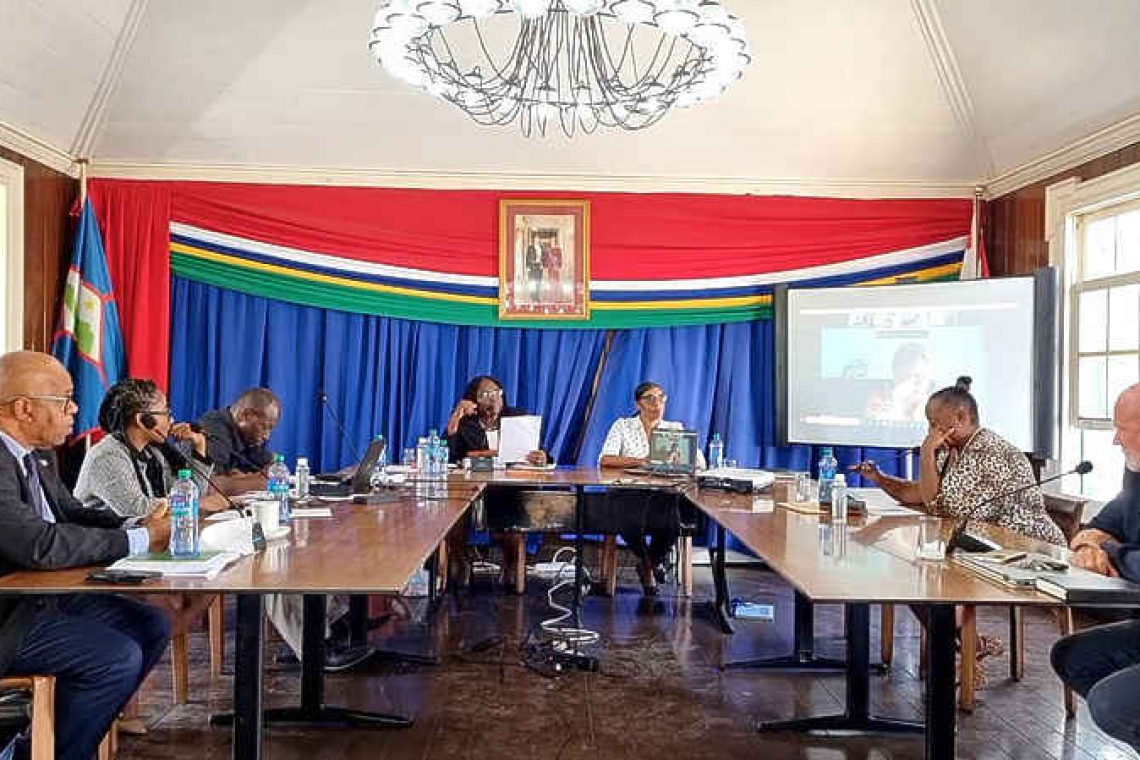 Island Council members and Government Commissioner Alida Francis during the meeting of Thursday, May 19.

ST. EUSTATIUS--Government Commissioners of St. Eustatius Alida Francis and Claudia Toet and the Island Council unanimously agreed during Thursday’s Island Council meeting that the mediation process pertaining to the restoration of democracy has been successfully concluded.

Island Council Members for Progressive Labour Party (PLP) Rechelline Leerdam, Reuben Merkman and Clyde van Putten, Adelka Spanner of the Democratic Party (DP) and independent Councilman Koos Sneek all voted in favour of this decision, which has been submitted to the State Secretary of Kingdom Relations and Digitisation in The Hague. The parties involved thanked the mediators for their “expert support” and “selfless efforts” during the past three months.
The two mediators, former Prime Ministers of the Netherlands Antilles Maria Liberia-Peters and Suzy Camelia-Römer, held meetings in March with all individual members of the Island Council, the government commissioners and the civil servants involved, on request of the Executive and Island Councils of St. Eustatius. The mediation team was supported by lawyer and former Ombudsman of Curaçao Alba Martijn.
Regular meetings with the Island Council and the commissioners were held since then in a “pleasant atmosphere”, it was stated. The request for mediation was laid down in an Island Council motion adopted December 23, 2021. Almost five months later, it was stated that the mediation process had been successful.
The parties involved are on speaking terms again and the mediation has been used to reach agreement on several important matters, including 12 criteria for the further development of Statia. Also, the trajectory for completing the Rules of Procedure has been established.
Furthermore, the Island Council – above party politics and in the interest of Statia – unanimously took a position with regard to the trajectory for the restoration of democracy by means of a route and timetable, set out in phases and times.
The government commissioners said they share the Island Council’s opinion regarding the restoration of democracy, except for the timeframe within which the restoration of the powers relating to public finances should take place. The commissioners consider that six more months are needed to complete the activities in this area.
In December 2021, the Island Council adopted a motion in which it stated that due to a lack of consensus, the Executive and Island Councils had failed to establish a clear path regarding the restoration of democracy in Statia, and it was decided to initiate independent mediation to bring parties closer together.
As a starting point, at least the powers of the Island Council should be restored after the Island Council election in March 2023, unless there are reasons to prevent this measure from being taken, the Executive and Island Councils of Statia agreed.