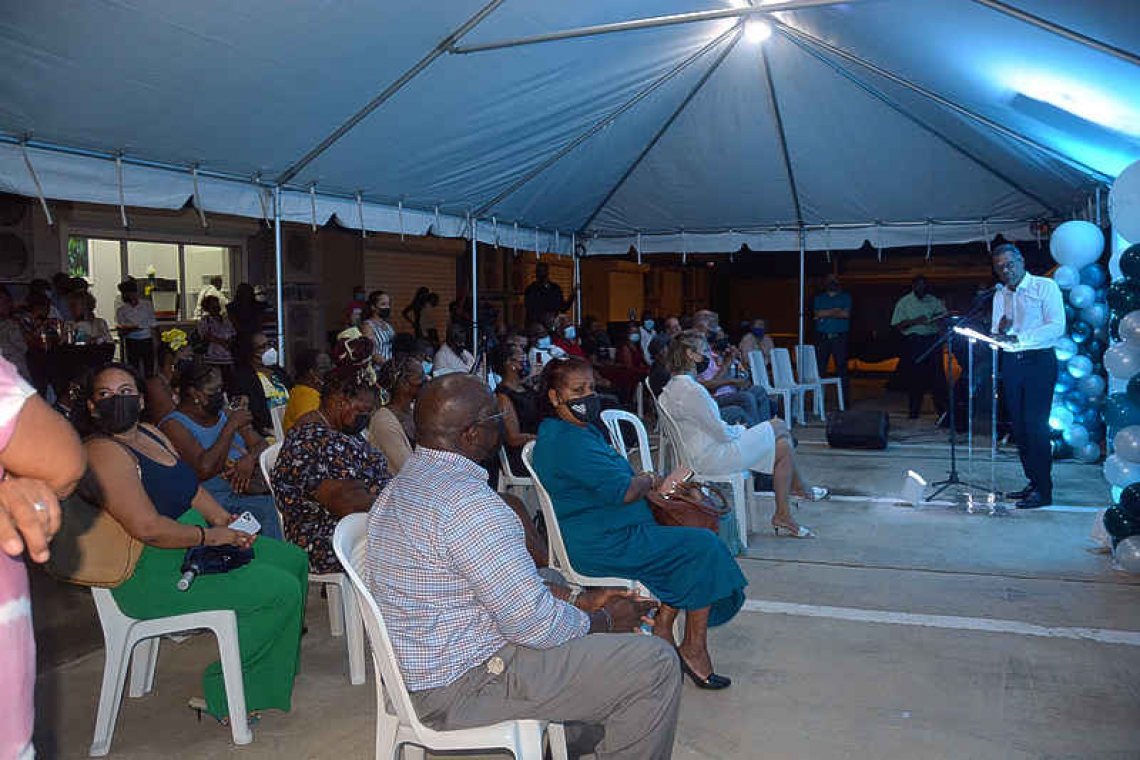 Addressing attendees at the launch, Mercelina said after 11 years of a new constitutional status, the country has not achieved what was envisioned. “Instead of celebrating the achievements of this country of the past 11 years, we are here celebrating today the beginning of a new chapter in the history of St Maarten, being the birth of a new movement that will ultimately get this country where it deserves to be,” Mercelina said.

He told attendees that three months ago, being very disappointed with the “non-promising status” of St. Maarten, he had decided to approach “great citizens” with “a great heart” to join forces in a foundation, with the objective of giving directional advice to government.

“But every time … the conversation would end up with a request from those that I have been speaking with not to start a foundation, but an association. I have given follow up to this request and today we are standing with a great group of people committed to serve the country,” he said.

URSM is governed by a board consisting of attorney Brenda Brooks as President, Secretary Veronica Jansen-Webster, Treasurer Colomarino Hennis and board members Stuart Johnson and Josianne Fleming-Artsen.

Mercelina, a former UD MP, resigned from UD and declared himself an independent MP. He eventually contested the January 9, 2020, snap elections on the slate of the United People’s (UP) party. He resigned from UP in a letter dated September 13, 2021.

URSM’s short-term objectives are to focus on health care; improvement of capacity, continuity, accessibility, affordability and quality. The party plans to focus on the registration of medical health professionals; organise mental health care now that the new General Hospital is being constructed; and focus on immigration as unregulated/uncontrolled immigration and an improperly-controlled border will only lead to chaos and contribute to the import of poverty.

Mercelina said immigration policies have to be adjusted to the country’s labour needs.

According to the URSM leader, the country has a problem, as it is constructing a multimillion-dollar new hospital, but it never defined the level of care the country should have. “We think that building a hospital is building … – no, it is building a health care concept, but we did not agree on the concept yet,” he said.

In the area of housing, the party said more social housing for the less privileged and affordable housing for the middle class is needed. “World Bank came with a lot of money, but where are the replacements of the houses of the poor people that lost their houses during [Hurricane – Ed.] Irma?”

The party also plans to tackle poverty by increasing the minimum wage and the old age pension. “We have to start a high-level hotel vocational academy that will serve St. Maarten and the other islands in the Caribbean. We have to introduce environmental police to combat the littering and dumping of car wrecks next to the roads. We have to implement, organise and regulate a garbage collection system and, like it or not, we have to organise our public transportation,” he said.

The party’s long-term objectives include focusing on autonomy for St Maarten.

“An autonomous country can call itself autonomous if it has a healthy and effective utility system (GEBE); a good quality and competitive telecommunication system (TelEm); a functional and competitive airport; a harbour with logistics to serve the neighbouring Caribbean Islands and the cruise industry; a hospital that adheres to the demands of a vulnerable Island with a well-defined level of health care; and a waste management system with a sustainable effective waste-collection and waste-processing system.

“If we don’t make this work, our children are going to [be] drawn in our garbage, but instead of fortifying these pillars … we are using them as extension arms for ministers and politicians to gain votes, to borrow money from, to fulfil political agendas and political goals [and] to nominate incapable political friends on the boards of these.”

According to Mercelina, before St. Maarten can become a really autonomous country it will have to disconnect government-owned companies from the influence of politicians; dollarise; develop a National Bank/Development Bank to help, for example, the middle class with financing; focus on US pre-clearance; make English the first language in schools; add a “Caribbean flavour” to the judicial system by stimulating youngsters to get into law schools and get trained to become prosecutors; have the ability to borrow money on the international financial market; promote education; and promote follow-up education in the region, as the professionals returning will better understand the sociocultural context of the people of St. Maarten.

Mercelina said there is need for a new political movement because there was and continues to be no realisation of the critical socioeconomic situation of the country.

Mercelina believes that there is a trend of “greed,” “deception” and “lack of integrity” in the country. “The concept of integrity is lost as a valuable norm in our community and between our politicians because of the community being small and everybody knows everybody. There must be a big call for integrity for politicians to survive their mission. Politicians often forget that it is not about them, but about all of us,” he said.

“‘Country above self’ has been replaced for ‘self above country’, also between politicians. We too often see the political mission as a game to win instead of a mission to serve the country. We have been misusing the government-owned companies – GEBE, Airport, Harbour, BTP [Bureau Telecommunication and Post] – as an extension arm for politicians and ministers.”

He shared his thoughts on how the country should be governed during a time of crisis.

“A pragmatic logical decision-making can help in crisis time. You have to understand that, especially in crisis time, rules are there to serve mankind and not mankind to serve rules. An example of this is the extensive procurement of the World Bank that paralysed the quick recovery of St Maarten after [Hurricane] Irma.

“Crisis time demands crisis management. A crisis calls sometimes for a bold approach. Govern with courage, take a decision, instead of hiding behind reports of committees and consultants. Dare to take a decision. Show your backbone. Dare to take calculated risks on an executional level. Above all, crisis or not, govern with morals, principles, integrity, transparency, respect – and above all: govern with vision,” he said

For St. Maarten to get back on track, Mercelina believes that goals have to be set and work undertaken structurally to achieve the goals.

Party Board President Brooks, in her remarks, said URSM is here to remind the population that they are St. Maarten and the government they elect is a representation of their beliefs and ideas.

“It is time to do things differently, because that is our belief. It is time to elect individuals because of their knowledge, capability, selflessness and dedication towards the greater good. It is time we elect leaders who have a track record of making a change in the position they hold now and who are willing and able to bring that success forward in the public arena,” Brooks told the gathering.

“Elect leaders not seeking the limelight that a political position brings, but the attention of the people to serve the people.

“It is time we walk down a different street. We have lost our way, no doubt about it, we have become entitled babies. If our ancestors, with less than we have, have built this country brick by brick, so can we, But only by electing people whose interest is embedded in the betterment of this country and its people.”