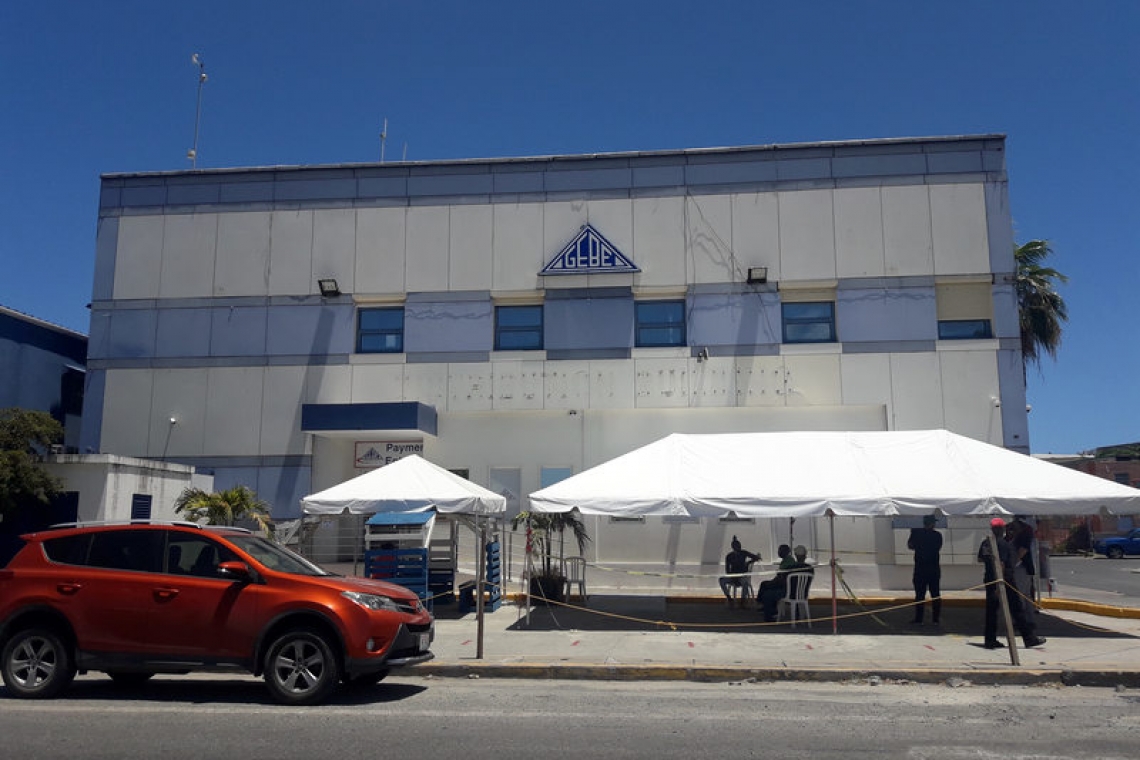 Consumers waiting under tents outside GEBE on the Walter Nisbeth Road (Pondfill Road) on Thursday to pay their bills (John Halley photo).

PHILIPSBURG--Minister of Public Housing, Spatial Planning, Environment and Infrastructure VROMI Egbert Doran believes that utilities company GEBE should have provided “proper awareness” and given “clarity” on utility bills that consumers have been complaining about first, before announcing that it will start disconnections as of June 30.

“I personally was a bit taken aback seeing the article yesterday (Tuesday) that was published by the management of GEBE. I made some phone calls to enquire what is the current stance. To be honest, I would have dealt with it different. Just to give an example, we already have so much individuals within the community that are hurting and they are also indicating the fact that, you know, the bills are too high.

“So before saying that we are gonna disconnect, I believe a proper awareness should be brought forward; and clarity to the people within the community to understand the reason why the bills are the way they are, and then we can start to talk about disconnections,” Doran said in response to a question from another media house during the live virtual Council of Ministers press briefing on Wednesday.

“However, as I reiterated before, I believe that the right thing to do – of which I will communicate to them – will be to clarify first the situation at hand, which is the clarity that our constituents seek in regards to the amount in the bills. So, once clarity is brought there then we could start to talk about disconnections,” the minister said.

“And one thing (that) is very important to note as well is the fact that they (GEBE) are highlighting the payment plans, but first, I believe again, clarity should be bought in regards to the numbers in the bill, of which I will follow up.”

The minister said further that “I personally had seen maybe 20 bills in the last week – comparing them back and forth, going over it with my cabinet, cross referencing the numbers – some make sense, some we are still debating. So, it is definitely something that we are dealing with as a government.”

Doran said he had indicated to Prime Minister Silveria Jacobs and Tourism, Economic Affairs, Transport and Telecommunication (TEATT) Minister Ludmila de Weever that a shareholder’s meeting should be called “to determine what we are going to do in regards to these bills and how we are going to deal with them. So, it definitely has the full attention of the Council of Ministers.”

He noted “I want the public to be rest assured that we understand what is going on and we are going to figure it out and I will get back to you as soon as possible, as soon I get more clarity.”