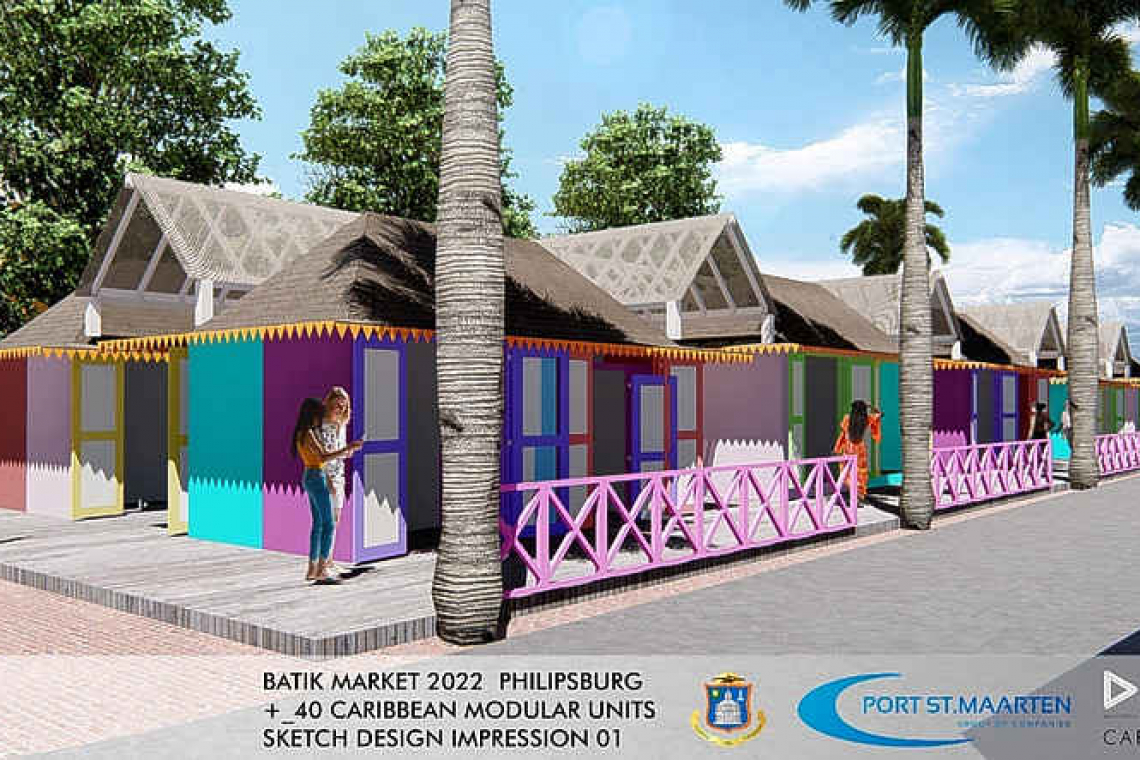 The approved architectural renderings for the Philipsburg Marketplace. The design boasts enhanced structures with removable components to prepare for a possible hurricane, and on-site storage for the vendors.

PHILIPSBURG--Acting Minister of Tourism, Economic Affairs, Transport and Telecommunication (TEATT) Omar Ottley presented architectural renderings for the Philipsburg Marketplace, designed by DAM Caribbean on the instructions and under the supervision of Port St. Maarten.

The design for the new marketplace is the result of a public-private collaboration between the Government of St. Maarten and Royal Caribbean Group (RCG), established by former TEATT Minister Roger Lawrence, as announced on May 16, 2022. Three months earlier, on February 2, the minister and staff walked through the marketplace with Port St. Maarten Group (PSG) management and Royal Caribbean Group officials and talked with vendors.
The ministry looked for creative alternatives in collaboration with PSG and RCG to get the project completed. An agreement was reached with RCG that committed to investing NAf. 600,000 in the project.
Ottley received the final architectural renderings on Wednesday morning. They include enhanced structures with removable components to prepare for a possible hurricane, and on-site storage for the vendors. “Minister Ottley immediately met with the stakeholders on Wednesday for their approval,” it was explained in a TEATT press release. “They were very impressed with the architectural renderings.”
Ottley stated in the release that while architectural renderings had been submitted in 2019, the Ministry of Public Housing, Spatial Planning, Environment and Infrastructure VROMI had deemed the plan “not feasible” and “not in line” with the regulations. Members of Parliament made the necessary budget amendments to reserve funds in the 2022 budget for this specific project.
Ottley said that before requesting the architectural renderings, a full overview was given by VROMI department, to expedite the process and ensure approval. Once the approval is granted, the intention is to obtain a bill of quantity for the Marketplace project.
“This is an opportunity we cannot afford to pass us by. The cruise line has shown extreme interest in the project,” Ottley said. “There is a workgroup between RCG, VROMI and TEATT, not only for this project but for other projects in the pipeline and onwards. The workgroup meets on a bi-monthly basis for updates and to ensure progress is being made on the various projects that will enhance our country and the tourist industry.”
Ottley thanked RCG for its commitment to the enhancement of the marketplace and the Minister and Ministry of VROMI for their assistance.
He said that even though he is scheduled to be replaced by the incoming TEATT Minister, he hopes that this project will be taken up as a priority and the minister will ensure that it is done within the next year.