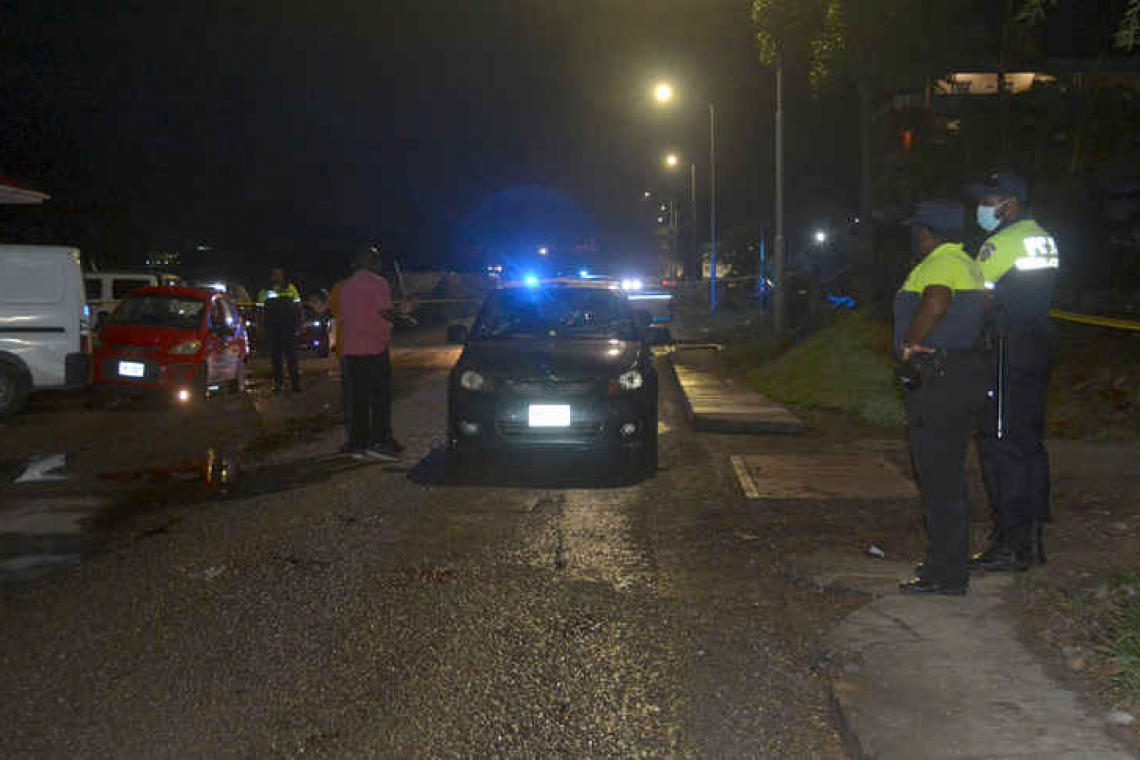 Police investigating the scene of the road accident on L.B. Scott Road on October 17, 2021. (File photo)

PHILIPSBURG--The man whose dangerous driving cost the life of a pedestrian on L.B. Scott Road around 9:30pm October 17, 2021, stood trial in the Court of First Instance on Thursday afternoon.

For violation of Article 5 of the Road Traffic Ordinance (“Wegenverkeersverordening”) he was sentenced to 60 hours of community service; revocation of his driver’s licence for 12 months, on three years’ probation; and payment of US $844.78 in damages to the victim’s family.
The 67-year-old pedestrian was hit by a car while he was crossing the road at the junction with Daisy Road, adjacent to Cake House bakery and supermarket. The man sustained life-threatening injuries and succumbed to his injuries at an intensive-care unit in a hospital in Panama on November 24, 2021.
According to witnesses, a passenger car stopped near Cake House just before the incident, presumably to allow the man to cross the street. The driver of a car that came from behind did not wait, but started to overtake the vehicle in front of him just as the victim crossed the street.
The pedestrian was hit by the overtaking car. It was a very hard blow. The victim became unconscious and was visibly seriously injured in the head. He also had a broken leg, broken ribs and other fractures. The victim was carried into the ambulance in a comatose state and transported to the hospital. He was later flown out to Panama.

Careless driving
The driver of the overtaking vehicle was charged with careless driving that caused the collision which resulted in the victim’s death.
Whether this is the case is assessed on the basis of the evidence in the criminal file.
If it can be concluded that the suspect committed one or more serious traffic offences, it can generally be assumed that there is guilt; at least, if it is plausible that the collision was – partly – caused by those violations. This may concern speeding violations, violation of right-of-way rules, but also careless driving in general. These violations, in turn, will have to be proven; for example, by witness statements or by technical investigations based on traces.
The Prosecutor’s Office found sufficient evidence that suspect Darlon Darnell Mussington (45) had been driving recklessly on the dark and wet road when he decided to overtake at least one, but perhaps even three waiting vehicles, while he accelerated his car and hit the pedestrian. Mussington was not charged with the crime of death through guilt.
For violation of the Road Traffic Ordinance, the prosecutor called for 60 hours of community service, the equivalent of 30 days’ incarceration. Also, the man’s driver’s licence should be revoked for 12 months, six of which to be suspended, on three years’ probation, with payment of $844.78 in damages to the victim’s family.
Mussington told the police that he was returning home from a game of pool in French Quarter that night. He had been drinking two glasses of Mama Juana, a beverage from the Dominican Republic with a 30% alcohol content.
He said he had not had a good view of the road. He said he had seen a “shadow” and turned on the high beam of his car. Only then did he see the pedestrian, but it was already too late to avoid a collision.
Given the conditions on the road, the suspect drove too fast, the prosecutor said. “He should have been extra careful with pedestrians, who are vulnerable road users. He overtook a stopping car at an intersection. He himself said that he had had two drinks. More caution should have been required of him.”

‘Traffic error’
Attorney Shaira Bommel pleaded with the court to acquit her client of all charges in this “tragic road accident”. The lawyer said Mussington had made a “traffic error” but had not caused any danger as the pedestrian had “suddenly” crossed the road.
According to Bommel, the casefile was “below par” and “careless” because the road was not investigated for skid marks. Also, her client was not submitted to an alcohol test, his car was not technically examined, and the maximum speed with which he had been driving was not calculated.
The court found reckless driving proven. This had caused a collision, as the driver could not halt his car in a timely fashion. Ultimately, the collision led to the victim’s death, the judge said.
This violation of the Road Traffic Ordinance carries a maximum prison sentence of 30 days, but the judge did not impose a prison sentence, as the defendant is a first offender. Because he earns a living as a salesperson who needs his car to visit his clients, the judge did not impose the temporary revocation of the man’s driver’s licence as demanded by the prosecutor.
Parties have two weeks to file appeals.