CPS says mosquito larvae found in one in four houses 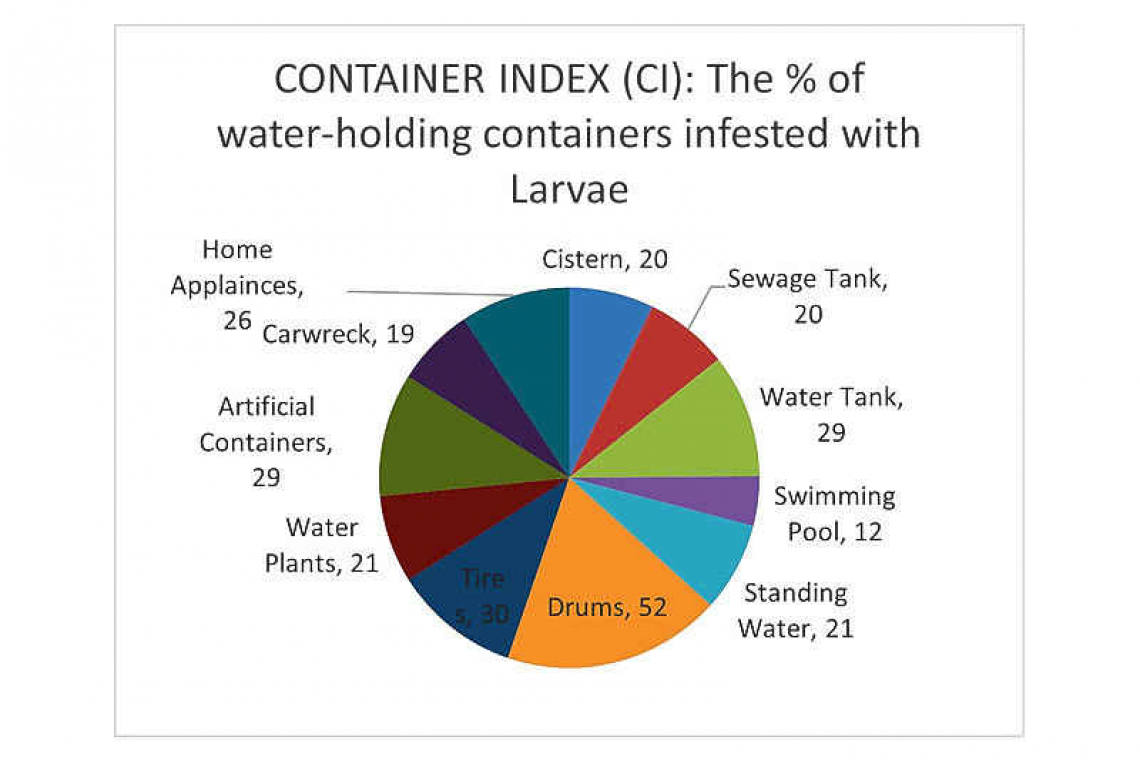 Container Index, the percentage of water-holding containers infested with larvae.

The Vector Control Team has started district area assessment as of October 12 in Philipsburg, Over the Bank, Pointe Blanche, Oyster Pond, and Guana Bay, CPS said in a press release on Monday.

The CPS Vector Control Team recently finished the first round of inspection. In total, the team inspected 933 premises, of which 235 houses were breeding mosquitos. This means that mosquito larvae were found at one in every four houses. Of the 2005 wet containers inspected, 582 were found to contain mosquito larvae.

The most common breeding sites during this round of inspection were drums, tyres, water tanks, and artificial containers used by families and individuals. “Artificial containers such as Styrofoam cups, food-boxes, plastic bins, flowerpot saucers, etc., can hold water and were found lying around in the tenants’ yards,” said the release.

The Vector Control Team noted that in all potential breeding sites, drums and tyres were shown to be the most common among all the wet containers – 52 per cent and 30 per cent respectively.

Residents are asked to cooperate with the Vector Control Team to remedy any issues that may arise and are requested to conduct a general clean-up of their premises.

The Vector Control Team expressed the need for the public to dispose of any bulky waste, including refrigerators, stoves, furniture, tyres, and containers, as these items can provide potential breeding grounds for mosquitos.

“Source reduction is the key to decreasing the mosquito population. Due to the tropical nature of our climate, breeding habitats are in abundance, and many of them are unfortunately man-made,” according to the release.

The Vector Control Team stressed the importance of persons’ checking around their yards to ensure that there is no standing water, especially after a rainfall.

This email address is being protected from spambots. You need JavaScript enabled to view it. with supporting pictures to report a mosquito nuisance or request assistance.