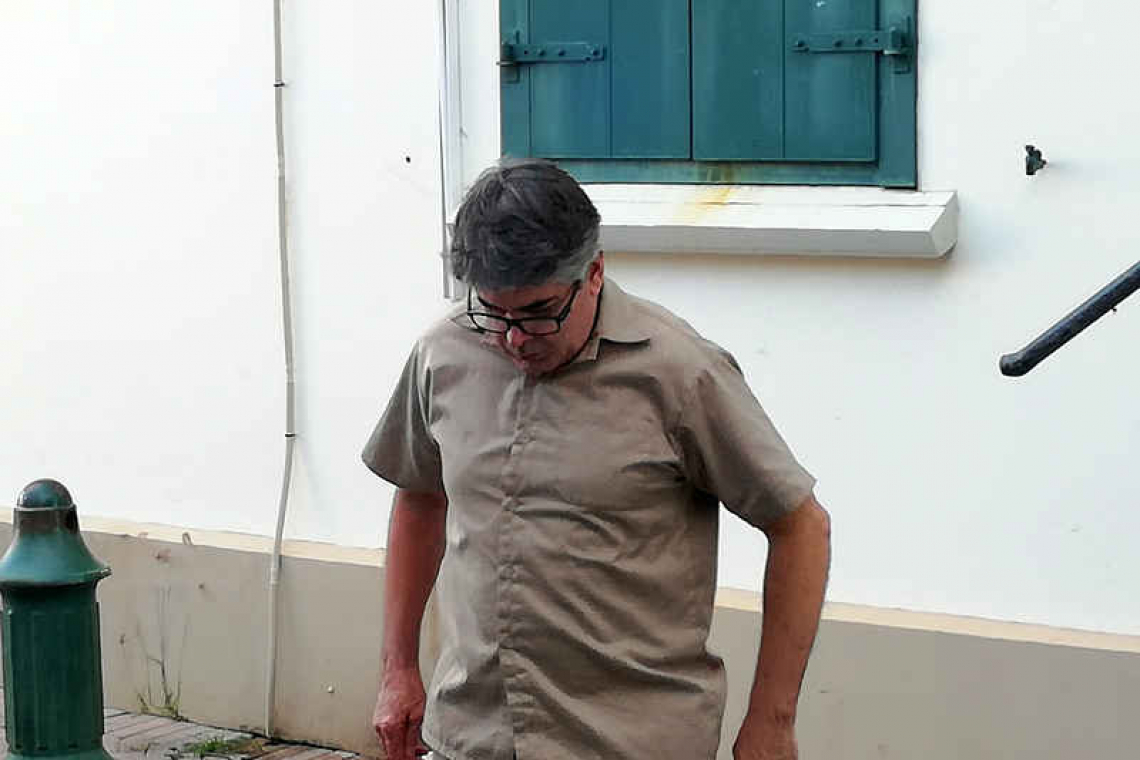 PHILIPSBURG--Almost three years after he was sentenced by the Court of First Instance in St. Maarten to seven years in prison for a large number of crimes, among them the sexual abuse of a minor child and possession, production and distribution of child-pornography, Collin Kristensen (63) is still in Scotland fighting his extradition to St. Maarten. In doing so, he is effectively thwarting efforts by the Joint Court to start appeal hearings.

Kristensen was sentenced in February 2019 for a long list of crimes, which included misappropriation of a number of diamonds in the aftermath of Hurricane Irma in September 2017, mistreatment with the use of a Taser gun, bribery of a police officer and possession of a quantity of cocaine.

The Court also found him guilty of the sexual abuse of his then-six-year-old daughter and of possession of a large quantity of child-pornography, which he also distributed. This concerned videos and photographs of his own daughter and unknown children.

These crimes were committed between December 2015 and December 2017. Kristensen was arrested on July 6, 2018. He appealed the sentence, as he only pleaded guilty on the cocaine-possession charge.

In December 2019, the Court of Appeals temporarily suspended Kristensen’s pre-trial detention for “urgent” medical reasons, but he should have returned to the Pointe Blanche prison no later than May 7, 2020.

While in detention in Curaçao, Kristensen was diagnosed with a herniated disc in his lower back and his condition was aggravated by a “homemade” prosthesis on his left leg.

Kristensen claimed he would require highly specialised surgery to his spine which is not available in the Dutch Caribbean. As obtaining a prosthesis in St. Maarten proved to be near impossible and very costly, Kristensen, who is of Scottish/Danish descent, requested the court’s permission to undergo surgery and to obtain a prosthesis in either Denmark or Great Britain.

His detention was suspended to allow him to undergo specialised surgery abroad and to provide him with a special leg prothesis. In case he was not able to return on time, the court demanded a doctor’s letter to indicate the reasons for any delay, such as hospital stay or rehabilitation.

If he remained abroad without any proper notification the Court of Appeals said the Prosecutor’s Office would immediately be notified to engage International Criminal Police Organisation Interpol in bringing the defendant back to St. Maarten.

The suspension of Kristensen’s preliminary detention, which was extended on September 9, 2020, expired on Wednesday, December 9, 2020. Six days later, his lawyer Shaira Bommel pleaded with the court for an extension to enable her client to finalise medical treatment, which was delayed due to the COVID-19 pandemic.

According to the Appeals Court, Kristensen had not made sufficient efforts to obtain treatment and had failed to provide clarity about his medical condition, which was mainly based on his own words, and not supported by medical certificates from doctors or therapists.

The Prosecutor’s Office was ordered to send out a warrant for Kristensen’s arrest and to file a request with the authorities in Scotland for his extradition to St. Maarten.

However, almost one year later, Kristensen still remains in Scotland, his lawyer informed the Appeals Court on Tuesday. Kristensen developed a heart condition which prevents him from flying to St. Maarten, Bommel informed the court, adding that her client is entitled to attend his appeal hearings in person.

According to the solicitor general, Kristensen argues against his extradition because St. Maarten would be unable to provide the medical care he requires. Also, the Pointe Blanche prison would not meet international standards.

In the solicitor general’s opinion, it was “extremely bad” that two years and seven court hearings later, the suspect had still not returned to St. Maarten, even though he had promised to fly back from overseas in four to six months’ time.

“I see a pattern. The suspect now invokes a heart condition, without any substantiation or proof,” the solicitor general said in accusing the defendant of contempt of the court.

The defence lawyer denied this and stated that her client had met all conditions which were attached to the suspension of his pre-trial detention.

The Appellate Court decided to suspend the hearing one more time, until February 1, 2022. On that day, the state of affairs concerning the extradition process will be discussed, after which a final date for the appeal hearing will be set.