CFT: 2020 budget should be adopted as soon as possible 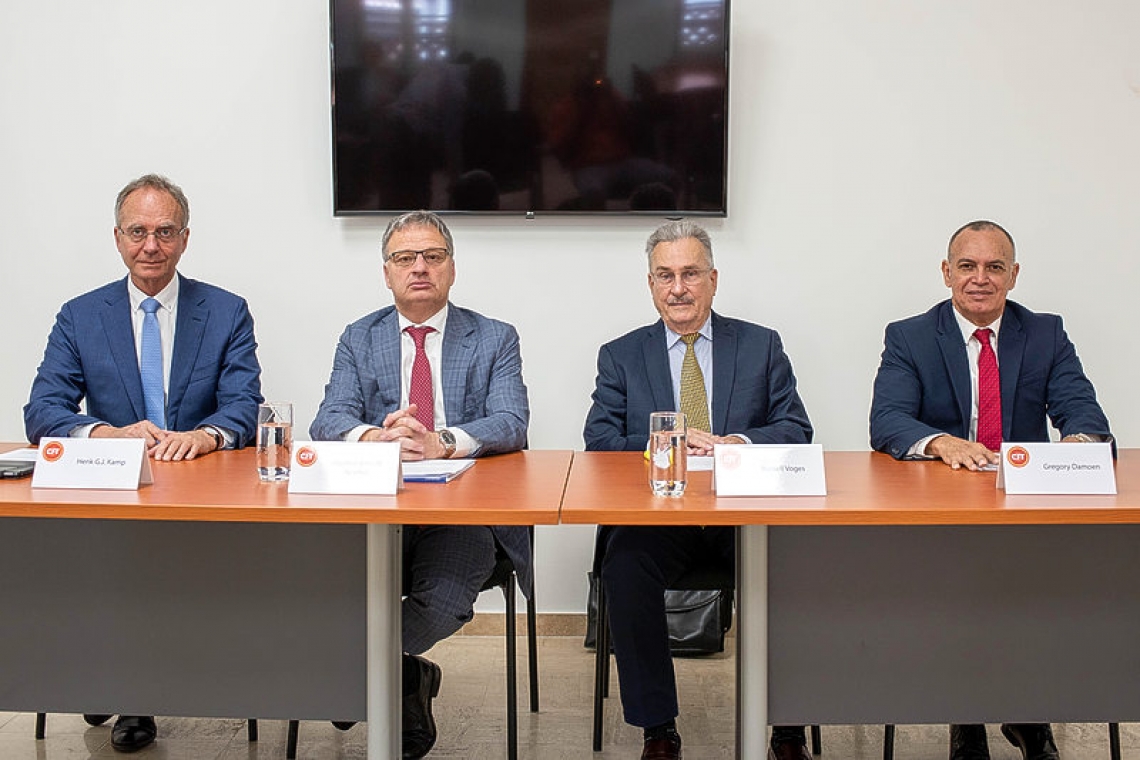 PHILIPSBURG--The Committee for Financial Supervision CFT urges government to adopt the 2020 budget as soon as possible.

CFT Chairperson Raymond Gradus made the statement at a press conference on Thursday. In addition to the budget, CFT said in a subsequent press release that measures must be taken to control cost and improve tax collection, enabling compensation for previous deficits as of the year 2021.

“It is also important to improve the budget and accountability cycle and to settle the large backlogs in the preparation and adoption of the financial statements,” CFT said.

CFT said it finds that St. Maarten has realised a lower deficit up to and including September 2019 than was previously estimated. The year 2019 is expected to close with a deficit of NAf. 47 million compared to a budgeted deficit of NAf. 71 million. However, it remains necessary to take more measures to increase revenues and reduce expenditures to achieve budget surpluses from 2021 onwards.

CFT received the revised draft 2020 budget, which has a deficit of NAf. 25 million and capital investments of about NAf. 62 million, on January 22. CFT issued its response to the draft on February 5 and advised the Council of Ministers not to allow for delay in the 2020 budget process and to come swiftly with an adopted budget.

“Considering the budget deficit in 2019 and the anticipated deficit in 2020, the CFT has discussed the liquidity position of St. Maarten with the Minister of Finance and the Council of Ministers. It is in the interest of St. Maarten that the deficit is turned into a structural surplus as soon as possible. Increasing income and in particular tax revenues is essential in this regard.

“The CFT emphasises that the restructuring of the tax office has to take place quickly and that cost-saving measures have to be implemented,” CFT said.

Gradus said it is crucial that government explore all available options for income-increasing and cost-saving measures to achieve surpluses from 2021 onwards. He said that in 2019 St. Maarten had drawn up a project plan for restructuring the tax authority.

“It is expected that this will lead to an improvement in tax compliance and will bring the tax revenues to a much-needed higher level. The CFT considers implementation of this plan, which was approved by the Council of Ministers of St. Maarten in April 2019, absolutely necessary to achieve budget surpluses in the future so that the government can compensate past budget deficits and pay back accumulating arrears and, more importantly, for achieving sustainability in public finance.”

Figures by the International Monetary Fund (IMF) show that while in 2012 the tax-to- GDP (gross domestic product) ratio of St. Maarten was at the same level as that of its regional peers at about 20 per cent, this ratio for St. Maarten had decreased to about 18 per cent at the end of 2018 while the neighbouring islands noticed an increase to about 23 per cent.

“Therefore, we advise government to also look at the current tax system of St. Maarten and identify areas where additional revenues can be generated in the most effective way.”

According to CFT, in addition to income-increasing measures, government has yet to implement any cost-saving measures. The passing of the pension reform to increase the civil servant old age pension AOV age from 62 to 65 years and change to an average-wage pension, as well as the collection of personal contributions to healthcare cost of civil servants, are measures CFT stresses.

According to CFT, since last year St. Maarten has had a Financial Management Improvement Plan that was approved by the Council of Ministers.

“Nevertheless, no concrete improvements have been made in this area in the recent period. The lack of implementation capacity and financing have been indicated as the reasons for this. As a consequence, the agreement St. Maarten made with the Board [CFT – Ed.] for an unqualified audit opinion on the 2021 financial statements will require considerable extra effort. The CFT has called on the Minister of Finance of St. Maarten to no longer wait with the implementation of the plan.”

St. Maarten has hired external support for the preparation of the 2017 and 2018 financial statements. However, the backlog in completing the accountability process for 2013 to 2018 continues. CFT emphasised the need to rapidly eliminate the backlog. This requires action from both government and Parliament.

Based on the instruction from the Kingdom Council of Ministers in 2015, St. Maarten has to compensate for the deficits from the past, eliminate payment arrears and make the health care system and the old age provision of the country financially sustainable.

The deficits can only be compensated if there is a budget surplus. In 2019, payment arrears were reduced by approximately NAf. 50 million and agreements were reached with various creditors. However, the remaining payment arrears are still substantial.

The draft legislation for the reform of the health insurance system has not yet been submitted to Parliament. The same applies to the draft legislation to raise the AOV age from 62 to 65 years. The revision of the civil servants’ pension legislation was offered to Parliament in October 2018, but has not yet been approved. This revision involves shifting from a final pay pension scheme to an average pay pension scheme and raising the retirement age from 62 to 65 years.

CFT said it had been informed that agreements to finance the recovery work at Princess Juliana International Airport (PJIA) have been signed. “Essential is now to take the further steps which are needed to obtain a well-functioning airport that can contribute to further economic recovery.”

“Looking back at the targeted instruction of September 2015 and the press briefings in the past years, unfortunately it must be said that the CFT has been repeating the same advices over and over again, without significant results on behalf of the successive governments of St. Maarten. All the topics mentioned today are on the table for too long now.

“It is of the upmost importance that St. Maarten finalises the 2020 budget and makes clear decisions regarding, as an example, its healthcare and old age pension system, and therefore guarantees budget surpluses from 2021 onwards,” Gradus said.