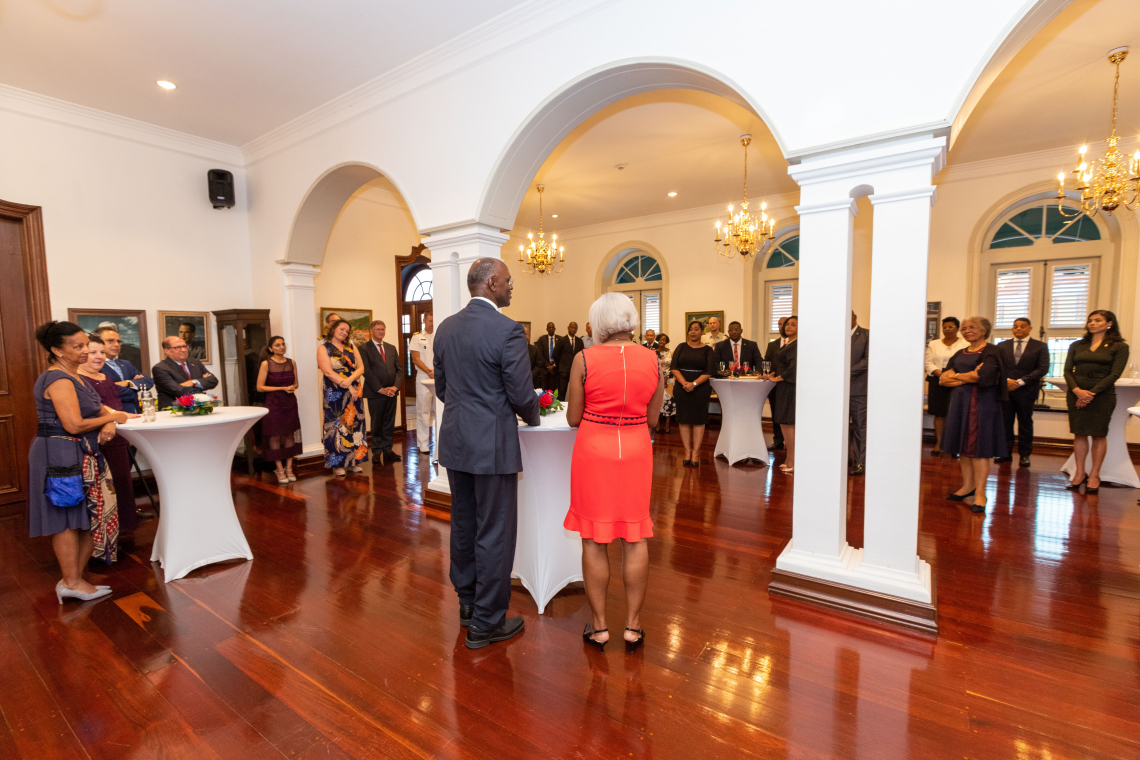 Governor Eugene Holiday (centre back to camera) and Mrs. Holiday as he addressed guests at the farewell reception organised in his honour at the Governor’s palace in Fort Amsterdam.

PHILIPSBURG--Governor Eugene Holiday had a busy schedule during a working visit to Curaçao on Monday, August 22, and Tuesday, August 23.

The working visit was part of the governor’s farewell, as his tenure as governor is nearing its end after 12 years. The visit started with a periodic joint meeting with the governors of Curaçao and Aruba. That meeting was followed by a meeting with Governor of Curaçao Lucille George-Wout. During the two days in Curaçao the governor met with several other officials. On Monday, he met with Commander of the Royal Netherlands Navy in the Caribbean, General Boots, as well as with Rector Magnificus Dr. Francis de Lanoy and Professor Dr. Flora Goudappel of the University of Curaçao.

The discussion at the university centred on developments regarding the availability of a law school and legal training offered for students in St. Maarten.

On Tuesday, the day started with a meeting with President of the Joint Court of Justice, Mauritsz de Kort (see related story). The governor and the president discussed several developments within the Joint Court, in general and more specifically, in St. Maarten. The governor also paid a courtesy visit to President of the Parliament of Curaçao, Charetti Maria America-Francisca and acting Prime Minister of Curaçao, Ruthmilda Larmonie-Cecilia. The final meeting was at the Central Bank of Curaçao and St. Maarten (CBCS), where the governor met with CBCS President Richard Doornbosch.

They discussed the state of the economy of St. Maarten and the consequences of economic and financial developments on the monetary union that Curaçao and St. Maarten form. The working visit was concluded on Tuesday night with a farewell reception hosted by Governor George-Wout in honour of Governor Holiday.

During the reception, Holiday was addressed by the governor of Curaçao, where she expressed her appreciation for their cooperation as governors during the past years. Governor Holiday also addressed his colleague from Curaçao and the guests present. He highlighted his fond memories of living and working in Curaçao, reflected on the shared history of Curaçao and St. Maarten, underscored the need to work together and wished the people and government of Curaçao all the best for the future.

Governor Holiday closed by expressing his appreciation for the good working relationship which he has had with his colleagues: first with former Governor Frits Goedgedrag, second with former acting Governor Adele van der Pluim-Vrede, and third for the past nine years now with Governor George-Wout. He thanked George-Wout for the friendship and hospitality and for the organisation of the wonderful reception.