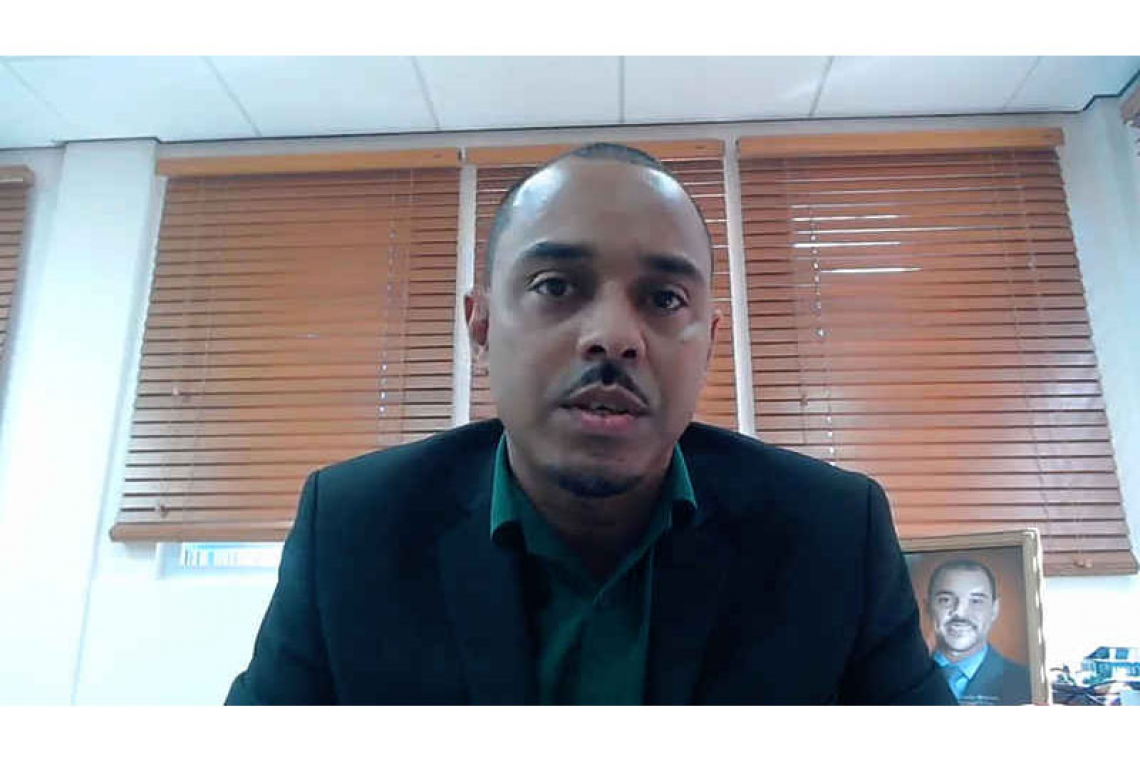 MP Rolando Brison during the live broadcast on Thursday.

PHILIPSBURG--Member of Parliament (MP) Rolando Brison has tendered his resignation as Chairperson of Parliament and will be taking time to reflect on himself as an individual, focus on his personal growth and re-evaluate his life, while continuing to attempt to raise the bar in Parliament.

He will remain leader of the United People’s (UP) party and will continue to serve as an MP. Brison announced his decision in a live broadcast via his Facebook page on Thursday. A resignation letter was also submitted to Parliament on Thursday and takes immediate effect.

Brison’s resignation came after mounting pressure from a number of his colleagues in Parliament for him to immediately step down as chair over a spliced recording circulating on social media with him, amongst other things, insulting his party’s faction leader and wife of the party’s founder, Grisha Heyliger-Marten and about making deals with “the young boys” in his coalition partner the National Alliance (NA). Prime Minister Silveria Jacobs had said that the spliced recording was taken out of context and that the MP’s actions were forgivable. Party for Progress (PFP) had also submitted a request for an urgent public meeting on the issue, where Parliament could officially remove Brison by majority vote, if he had failed to resign.

During his live broadcast, Brison said, “As many of you know there has been a situation surrounding a recorded audio that has been circulating over social media and around different circles that has been quite a topic of discussion in social circles as well as political circles. The thing is, my people, I have to say that amidst all of this, I have taken a lot of time to reflect and despite whatever, come what may, the fact is that I believe this starts with me.”

“... Especially with this situation, I need some time to heal, I need some time to get over what has been happening and evaluate my personal life and, of course, what many people are advising me [is to look at – Ed.] my circle who I keep and how I keep. Time to be a better person – a better family member. Raising the bar has always been the goal in Parliament, but I also intend to raise the bar in my own life, but in order to do that I need time, I need to take some time and the chair that I hold is one that does not belong to me. It belongs to the Parliament and its people’s representatives and I can’t take the time I need to grow and to heal right now while being the chair of Parliament. For that reason, with everything that has happened most recently and upon reflecting and discussing with my family and friends and colleagues, I have taken the decision that I will be tendering my resignation [as Chairperson] of Parliament. I truly believe that this will allow me to continue being an MP for the time being, but at least to take some time to reflect, to grow, to learn and to become the best person I can possibly be, because if I have been performing relatively well or pretty well or however anyone will address it, imagine if I can actually just take a moment and get inside here [referring to himself], functioning as great as it is on the floor.”