Another murder case scheduled for Kuchi 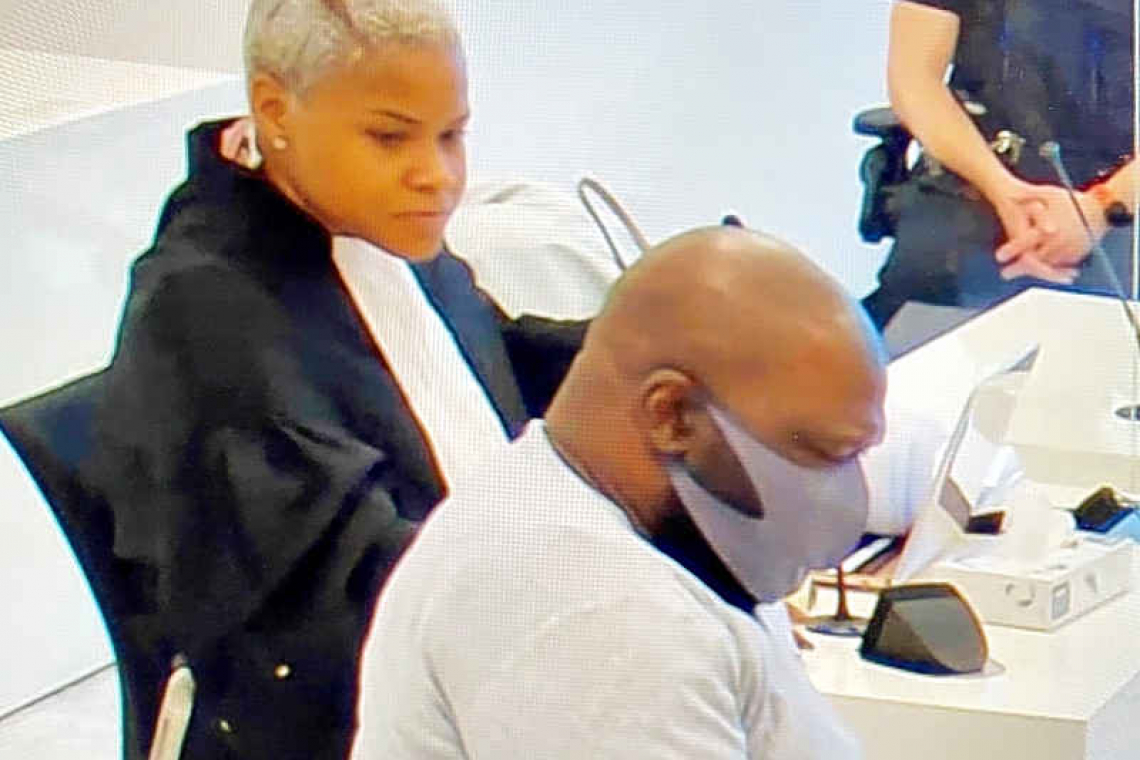 Kathron “Kuchi” Fortune (With mask) is seen during his appeal case in Amsterdam on Monday. On his left is his lawyer Sjamira Roseburg.

AMSTERDAM--Kathron “Kuchi” Fortune, the main suspect in the “Mars” investigation and convicted to life in prison for killing two men in a St. Maarten hotel room in December 2016, is scheduled to be on trial before the Court in Guadeloupe in March this year in connection with the murder of two men on French St. Martin in 2005 and 2006.

This became clear during the handling of Fortune’s appeal case in the Mars investigation in Amsterdam on Monday. While going through the suspect’s personal circumstances’ documentation, the court made reference to correspondence from the Guadeloupe Court which stated that Fortune was on the court docket for March 2022 to try him for the killing of two men on the French side in November 2005 and April 2006. The last names that were mentioned in this regard were Maynard and Hyman.

Fortune, who is locked up in a Dutch prison, responded that he was unaware of these cases. “I don’t know anything about this. I did not commit a crime on the French side and up to now I was not informed of that,” he told the Appeal Court when confronted with this unexpected notice.

Also new to Fortune was an October 2020 ruling of the Guadeloupe Court for the rape and murder of French-side resident Angelique Chauviré in June 2006. The Guadeloupe Court sentenced the suspect to 30 years in prison in his absentia. Fortune denied having committed this murder. “It has nothing to do with me.” He called it a “shame” that he was tried in his absence. “I was never able to defend myself.” The court conviction in question still needs to be officially served.

Fortune has a long list of convictions to his name. In 1989, at the age of 22, he received his first sentence of three years in prison for a violent robbery on a jewellery store in St. Maarten. In 2001, he was sentenced to eight years in prison for violent extortion. He denied to have committed this latter crime. In 2007, the Appeal Court sentenced him to 21 years for a murder he committed in St. Maarten in 2006.

While serving the sentence for the 2006 murder of Ervin Margerita, Fortune escaped during a visit to the doctor in February 2016. He was only recaptured in St. Kitts in July 2017 and went back to the Pointe Blanche prison. When Hurricane Irma badly damaged the St. Maarten prison, the suspect was transferred to the Netherlands where he has been kept in maximum-security prisons. He is currently locked up in Sittard. For security reasons, his trial takes place in the Netherlands. The judges, attorney-general and his lawyer all came to the Netherlands for the court proceedings.

While handling his personal circumstances’ documentation on Monday, January 10, the court cited from a psychiatric report. Fortune (44) comes from a family of eight children. He was born in Granada and moved to Aruba in his young years. His father is deceased. His mother still lives in Aruba. Fortune spent his youth in Aruba and St. Maarten, and has two children in St. Maarten.

The psychiatrist found no mental disease or other psychiatric or neurological circumstances that might make him unfit to be held accountable. The psychiatrist did find a light alcohol abuse and that alcohol was a trigger for problematic behaviour. Fortune admitted that when he drank alcohol, he made “bad decisions.”

Fortune was said to be a quiet person in detention, displaying a cooperative attitude. But he is not happy to be locked up in the Netherlands, he told the Court on Monday. “It is not nice. There are a lot of restrictions.” He said he had to undergo a search every week and that he had no family in the Netherlands. “I would love to go back to St. Maarten. I am not treated fairly in the Netherlands. They are saying that I am part of a gang, the NLS [No Limit Soldiers – ED.]. I have never been part of any gang,” he said.

During the hearing on September 1 and 2 last year, also in Amsterdam, Fortune said that he regretted what transpired on December 5, 2016 when two men, Luis David Sarante Diaz (23) and Erwin “Eggy” Rosario Contreras (23), died in a room at the Simpson Bay Resort. The bodies were removed from the hotel and dumped in the Little Bay Pond, only to be found on August 1, 2017.

During the hearing on Monday, the suspect said that he was a changed man and that he wanted to do better. “People do change. I have two grandchildren and I want to be there for them. The pain that my family and others went through, I don’t want that anymore.”

He said he wanted to start a new life, using the property of his parents in Granada as a source of income. Attorney-General Reinoud den Haan didn’t believe Fortune’s good intentions and described the suspect as a “dangerous, ruthless man.”