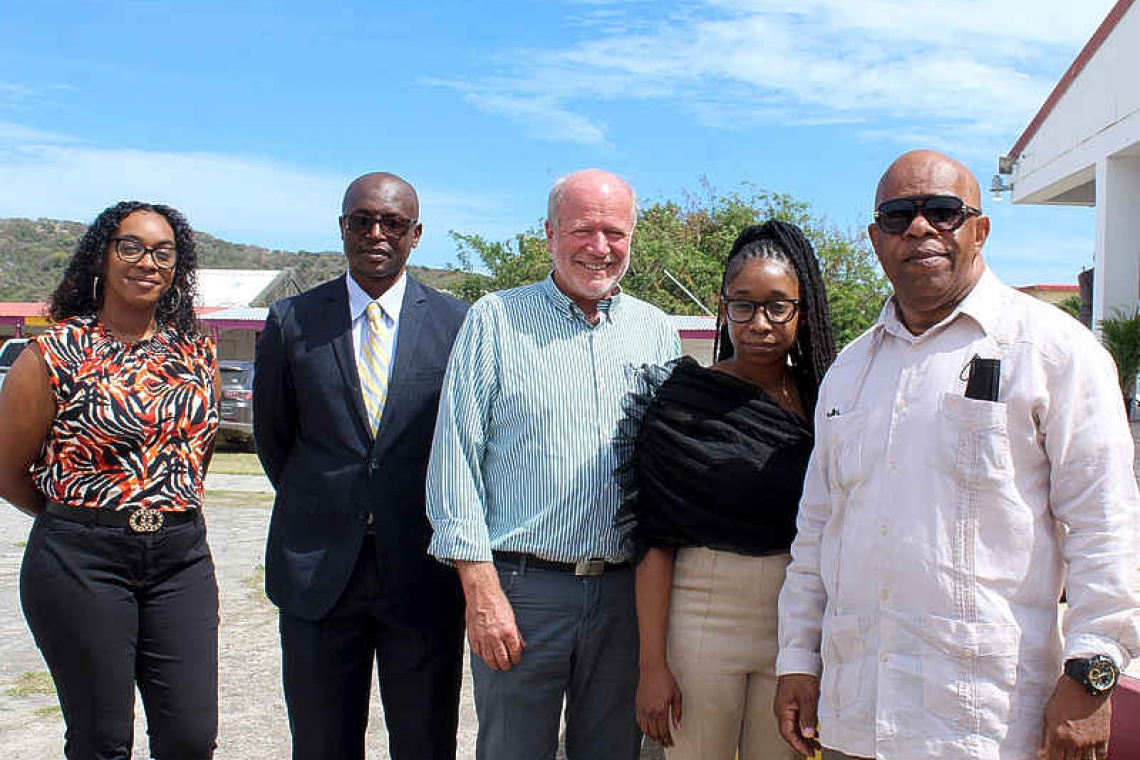 ST. EUSTATIUS--Island Council Member and leader of the Democratic Party (DP) of St. Eustatius Adelka Spanner has accused her colleagues in the Council of having sent a letter to the Parliament of St. Maarten on February 1 using the Island Council letterhead, which, according to her, is in violation of the law.

Article 34.1 of the law governing the public entities Bonaire, St. Eustatius and Saba WolBES “clearly states”, said Spanner, that documents from the Island Council are to be signed by the island governor and the registrar and not by a majority of the members of the Island Council.

In Spanner’s opinion, the letter, which was signed by council members Rechelline Leerdam, Reuben Merkman and Clyde van Putten of Progressive Labour Party (PLP) and Koos Sneek of Faction Sneek, is “fake and misrepresents” the Island Council of St. Eustatius.

“The Parliament of St. Maarten accepted the fake letter and invited the Island Council to make a presentation during the tripartite consultations between the parliaments of the countries Aruba, Curaçao and St. Maarten on May 4. I am not sure if the Parliament of St. Maarten is aware of the illegality of the letter, or that they chose to overlook it. Is it okay for members of the Island Council to disrespect laws when it is convenient to do so, and is this a good message to our children?” she wondered.

According to Spanner, “the notion that a majority trumps the rule of law” is one of the main reasons the national government in The Hague intervened in Statia. “How does this behaviour rhyme with the message that the intervention is taking too long, and is it sensible to rush back to full democracy when it is clear that valuable lessons are not yet learned?” she wondered. “It is sad to see that after four years, a majority in the Island Council still behaves in this manner.”

The DP “totally condemns this behaviour that is detrimental both to the integrity of our Island Council and works against a speedy return to full democratic government in St. Eustatius.”

Spanner said that one of the main reasons that The Hague intervened in Statia was the disrespect for or violations of the WolBES and FinBES laws. “These are the main laws that regulate how Statia should be governed.”

In Sneek’s opinion, Spanner’s statements do not have any merit. ‘We used the Island Council’s letterhead, which maybe we should not have, but it is clear in the letter that it comes from four Island Council members and was not sent on behalf of the full Island Council.”

Also, the letter dates from early February and Spanner did not respond to it until late April, Sneek said. “In this letter we requested to be at the meeting and in their response they [the St. Maarten Parliament – Ed.] invited the entire Island Council.” Spanner said she will not be attending the meeting.

Councilman Merkman stated that WolBES Article 34 is meant to make sure that official decisions, including letters, go through a procedure through which others can recognise the legal origin and that the content is according to the facts and intentions of the Island Council. The content of the letter under dispute, he said, “could have been somewhat better, more official so to speak.”
He said an advice was received to not make a habit of sending letters that are not based on a formal decision made in a public Island Council meeting and which are not signed by council members themselves, “but other parties do not have to overreact on this point,” Merkman said. “The content of the letter, its message, is far more important than the procedure.”

Article 34 is clear and the Island Council members will adhere to that in the future, Merkman and Leerdam said. They said the letter expressed the intention of four council members to request a meeting. “That was the sole mission of the letter.”

The letter was at no point withheld from Spanner, Merkman said. “Council-lady Spanner is against the restoration of democracy on Statia and has indicated she doesn’t want to be involved in any action to achieve such a purpose.”

Leerdam said they had sought legal advice and had been advised that the process was not correct, “but of course, nothing was done illegally with spiteful intentions. Going forward, we now understand the procedure. … In future we will ratify these decisions within Island Council meetings.”

The essence, she said, was that the four Island Council members wanted to request a meeting with the parliaments of the other countries within the kingdom.

“As we get closer to the date, because Statia’s Island Council just received the response from the [St. Maarten] Parliament, I guess now they [the DP] are trying to deter us from going to speak with the different parliaments within the kingdom,” Leerdam said.