A royal touch at anniversary of Netherlands-Aruba Association 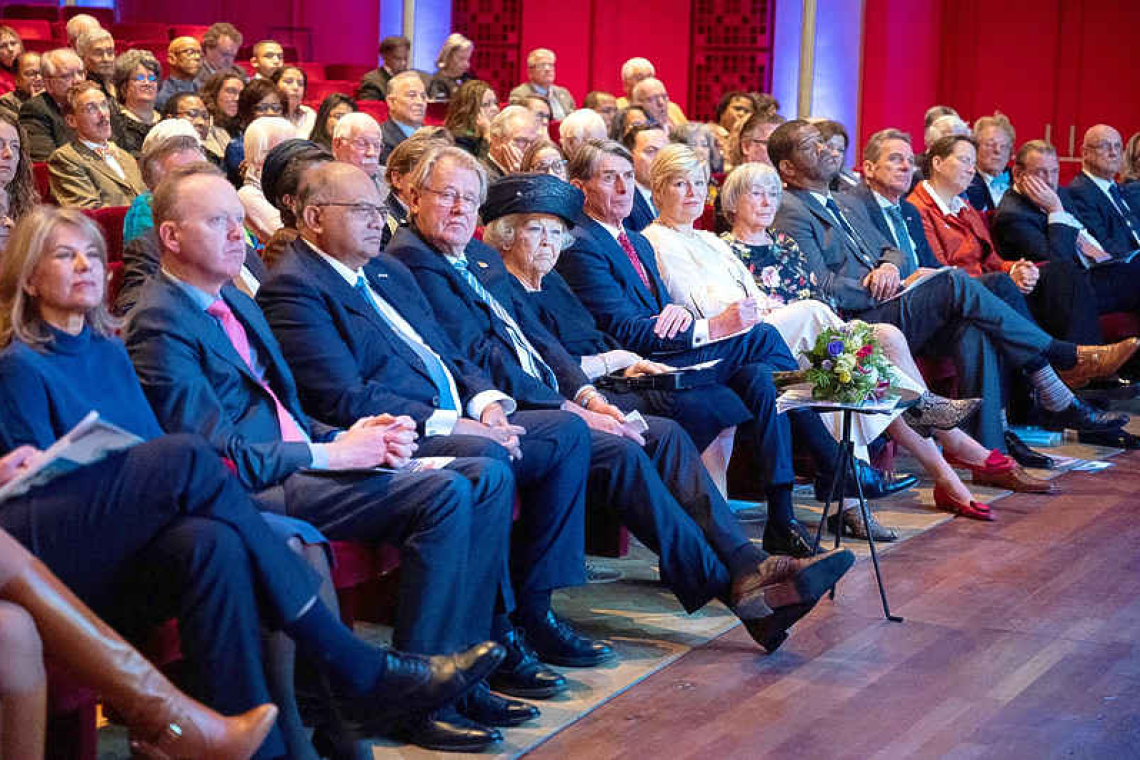 THE HAGUE--It was a royal event, the celebration of 25 years of the Netherlands-Aruba Association (“Genootschap Nederland-Aruba” GNA) in The Hague on Saturday with the presence of Princess Beatrix and a Knighthood in the Order of Orange Nassau for GNA Chairman Nico van Grieken.

The GNA anniversary event titled “The power of unity, the Kingdom and Aruba in the future,” was held at  Diligentia Theatre and also featured poetics, music and a series of expert speakers who shared their views on the (need for) collaboration in the Kingdom, the cultural differences and the colonial past. 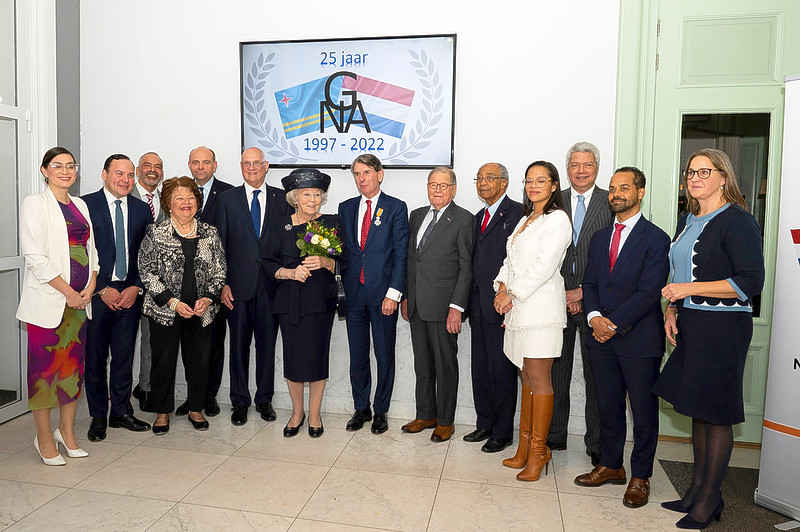 The board of the Netherlands-Aruba Association GNA with Princess Beatrix (seventh from left), with at her right GNA Chairman Nico van Grieken. (Nico van der Ven photo)

The GNA expressed deep gratitude for the visit of Princess Beatrix, patron of the historic Diligentia Theatre in The Hague. “We view your presence as an expression of your big, warm interest in Aruba and the other Dutch Caribbean countries. You were the Head of State when Aruba attained its autonomous status within our Kingdom on January 1, 1986. It was a special moment for Aruba, for the Kingdom and for you as the Head of State,” said Van Grieken.

The relations between the countries of the Kingdom were the joint theme of three lectures by Dean of  University of Aruba, Viola Heutger, historian Prof. Gert Oostindie of the Royal Netherlands Institute for Southeast Asian and Caribbean Studies KITLV, and Francio Guadeloupe, who teaches anthropology at the University of Amsterdam UvA.

Heutger shared her dream of a situation whereby youngsters can follow their studies in different countries of the Kingdom. “One year at University of Aruba and then continuing, without delay, one’s studies in another country of the Kingdom. Or doing a Bachelor in Nijmegen and a Master in Aruba,” she said.

Guadeloupe, former dean of the University of St. Martin (USM), advocated a joint mentality to deal with the theme ecology, climate change and nature/disaster management. To stimulate this, an exchange programme could be set up, which would allow, for example residents of St. Maarten to experience an earthquake in Groningen for themselves and to let people from Groningen feel what it’s like to go through a hurricane.

Guadeloupe also presented an anthropological analysis of the people in the Dutch Caribbean, their identity, culture, language and social class, which were all influenced by the evolution of migration. He reflected back on the people and said that not all that was wrong, was caused by The Hague.

Oostindie described the feelings of unease on both sides of the ocean in the current (constitutional) relations. He spoke about the lack of comprehension and how to reduce this, about the colonial past and the process of decolonisation. Just like dean Heutger, he saw more opportunities for more collaboration in the area of education, but also sustainable development and climate policy.

The lectures made clear that the relations require constant attention. The conclusion was that after 25 years, there was still a role for the GNA. There were several cultures intermezzos during Saturday’s event: poem by Frida Winklaar Domacassé and a guitar performance by Jean Jacques Rojer.

At the end of the event, GNA Chairman Van Grieken was surprised with a Royal decoration of Knight in the Order of Orange Nassau. The Hague’s Acting Mayor Mariëlle Vavier pinned to decoration on Van Grieken. “As chairman and public affairs expert, you play an active role in the GNA. You keep a sharp eye on the geo-political position of the Dutch Caribbean, advocate the interests of Aruba in the European union (EU) and you promote the mutual trade benefits of the Netherlands and Aruba,” said Vavier.

The GNA event was closed off with a reception. Guests were treated to music of the “cai di orgel” in the foyer of Diligentia Theatre. The GNA board said it looked back at a successful 25th anniversary celebration which once again confirmed its commitment to strengthen the ties between the Netherlands and Aruba.