Sarkozy convicted of corruption but likely to avoid jail 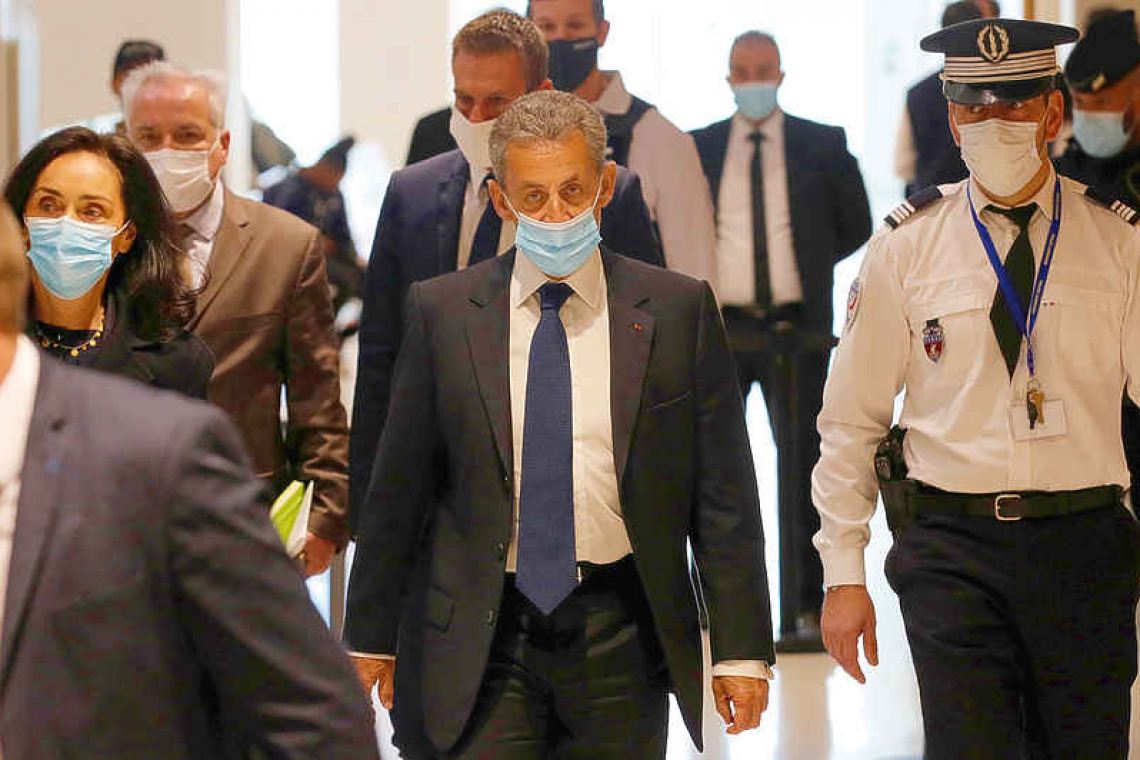 PARIS--Former French President Nicolas Sarkozy was found guilty of corruption on Monday and sentenced to three years in prison, a stunning fall from grace for a man who for five years bestrode the national and global stage.

A Paris court found that Sarkozy, 66, had tried to bribe a judge after leaving office, and to peddle influence in exchange for confidential information about an investigation into his 2007 campaign finances. "He took advantage of his status and the relationships he had formed," presiding judge Christine Mee said.
Sarkozy served as president from 2007 to 2012 and retains influence among conservatives, even after retiring. He is the second head of state in modern-day France to be convicted of corruption.
He may not spend any time in prison, however. Two years of his sentence were suspended, and Mee said she was open to him staying out of prison tagged with an electronic bracelet for the remaining year, although that decision rests with another judge.
The court found that Sarkozy had offered to secure a plum job in Monaco for a judge, Gilbert Azibert, in return for inside information about an inquiry into allegations that he had accepted illegal payments from L'Oreal heiress Liliane Bettencourt for his 2007 presidential campaign.
Sarkozy left the court without speaking, but his lawyer said he would appeal, and prove his innocence. "This ruling is extremely severe and wholly unjustified," Jacqueline Laffont told reporters.
Sarkozy had burst onto the world stage as a reformer full of ideas who wanted to break with France's stagnant past on the domestic front and restore the birthplace of human rights to a place of prominence in international affairs. He earned himself the nickname of the "Gallic Thatcher," undertaking market-driven reforms such as raising the retirement age, loosening the 35-hour work week and adjusting the tax system to encourage overtime.
Outside France, he brokered a ceasefire to the Russia-Georgia war in 2008, and in 2011 championed a NATO-led military intervention in Libya to support an uprising against its autocratic leader, Muammar Gaddafi.
Investigators had been wiretapping conversations between Sarkozy and his lawyer Thierry Herzog from 2013 as they delved into allegations of Libyan financing of Sarkozy's 2007 campaign. As they did, they learned that Sarkozy and his lawyer were communicating using mobile phones registered under false names. Sarkozy said he had become the victim of a witch-hunt by financial prosecutors who had used excessive means to snoop on him.
Asked by Reuters if Sarkozy’s conviction could pose a risk to his position as member of Lagardère's supervisory group, a spokesman for the media group said: "We are delighted with Mr. Nicolas Sarkozy's contribution and personal investment in Lagardère's supervisory board."
The former French president is also an independent director of French hotel giant Accor.
Herzog and Azibert, who were on trial alongside him, were also found guilty of corruption and influence-peddling. "Such behaviour can only seriously undermine the legitimate trust that the public must have in the justice system," Mee said.