Moscow appeals for calm amid deadliest Azerbaijan-Armenia clashes since 2020 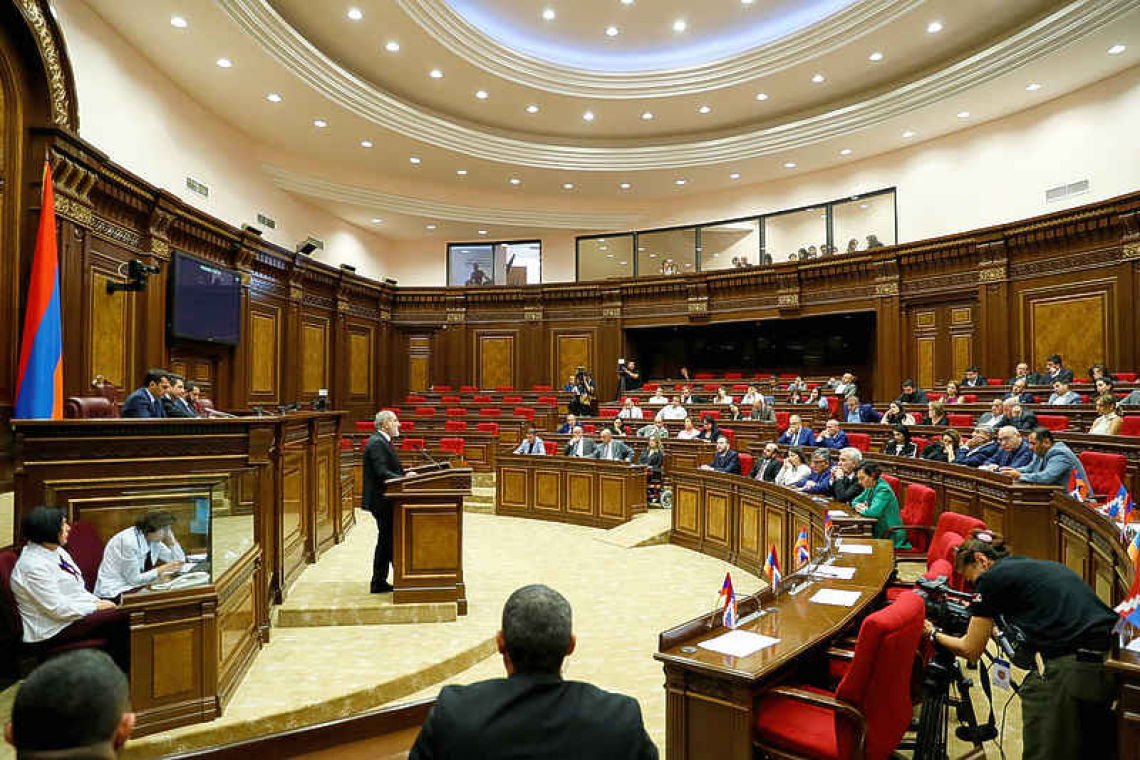 Armenian Prime Minister Nikol Pashinyan addresses parliament following an escalation in hostilities over the Nagorno-Karabakh region along the border of Armenia with Azerbaijan, in Yerevan, Armenia, on Tuesday.

TBILISI--At least 49 Armenian soldiers and 50 Azeri military personnel were killed on Tuesday in the deadliest fighting between Azerbaijan and Armenia since a 2020 war, each side said, spurring Russian President Vladimir Putin to appeal for calm.

Armenia and Azerbaijan, neighbouring former Soviet republics, blamed each other for the renewed fighting which began overnight at several points along their border, raising fears of another major armed conflict in the area of the old Soviet Union while Russia's military is tied up in Ukraine. Russia has peacekeeping troops in the Azeri-Armenian conflict zone as guarantor of an agreement that ended a six-week war two years ago over the disputed enclave of Nagorno-Karabakh.
Armenia said Azerbaijan had shelled towns near the border including Jermuk, Goris and Kapan, forcing it to respond. Baku said Armenian sabotage units had sought to mine Azeri positions and began the shooting.
It also accused Armenian troops of firing heavy weapons in violation of a ceasefire reached earlier on Tuesday. Reuters was unable to immediately verify battlefield accounts from either side.
"It is difficult to overestimate the role of the Russian Federation, the role of Putin personally," Kremlin spokesman Dmitry Peskov told reporters. "The president is naturally making every effort to help de-escalate tensions at the border."
Russia's war in Ukraine has undermined its status as a regional security guarantor, leaving room for Azerbaijan to make more claims, said Laurence Broers, associate fellow at the Russia and Eurasia Programme of Chatham House think tank.
Azerbaijan, which is politically and culturally linked to Turkey, made significant territorial gains in 2020, reclaiming land lost to ethnic Armenians in an earlier war over Nagorno-Karabakh 30 years before. "Since February, we also have been seeing the collapse of Russia's reputation as a security patron and a provider of security in the region," Broers said. "That has created a window of opportunity for Azerbaijan, recalling that the outcome of the second war in 2020 left unfinished business."
The CSTO, a Russian-led military alliance of former Soviet states that includes Armenia but not Azerbaijan, met on Tuesday to discuss the situation. Turkey reiterated its support for its ally Azerbaijan, with Defence Minister Hulusi Akar quoted by his ministry as saying that Ankara "will continue to stand by it in its just causes".
"Responsibility for the provocation, clashes and losses lies with the military-political leadership of Armenia," the Azerbaijani foreign ministry said. "Any actions against the territorial integrity and sovereignty of the Republic of Azerbaijan will be resolutely prevented."
Armenian Prime Minister Nikol Pashinyan accused Azerbaijan of attacking Armenian towns because it did not want to negotiate over the status of Nagorno-Karabakh, an enclave which is inside Azerbaijan but populated mainly by ethnic Armenians. He said the intensity of hostilities had declined although attacks from Azerbaijan continued.