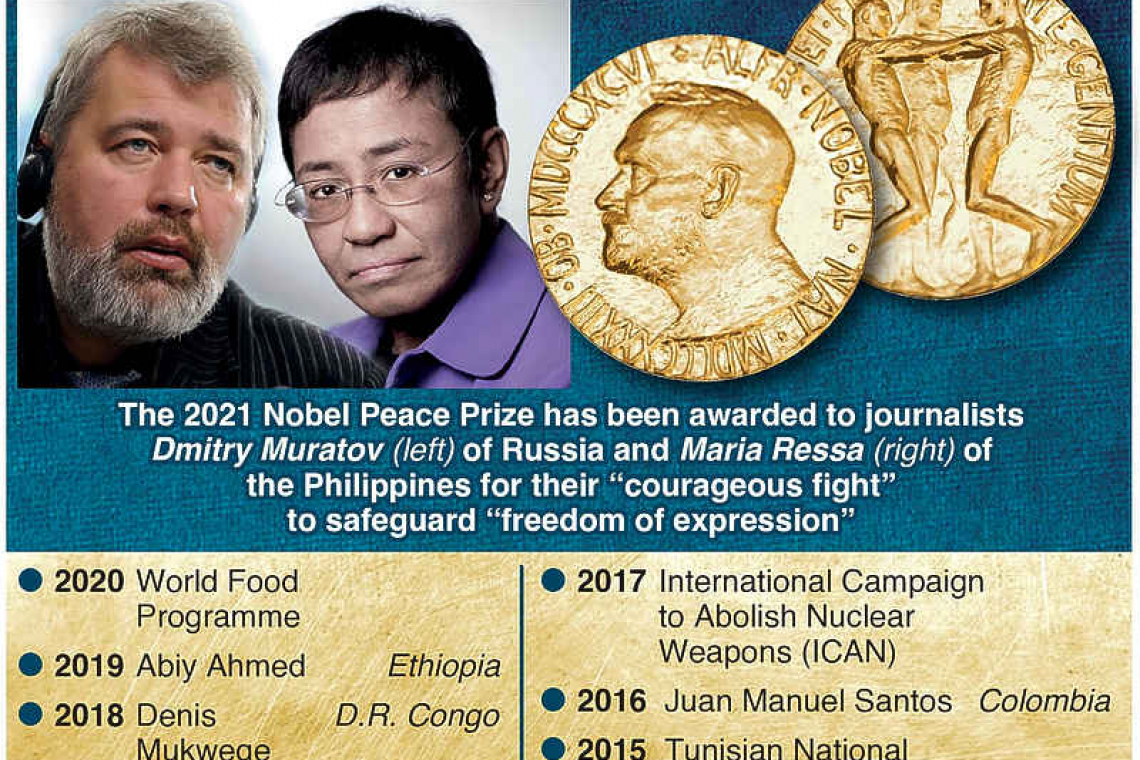 OSLO/MOSCOW/MANILA--Journalists Maria Ressa and Dmitry Muratov, who braved the wrath of the leaders of the Philippines and Russia to expose corruption and misrule, won the Nobel Peace Prize on Friday, in an endorsement of free speech under fire worldwide.

The two were awarded "for their courageous fight for freedom of expression" in their countries, Chairwoman Berit Reiss-Andersen of the Norwegian Nobel Committee told a news conference.
"At the same time, they are representatives of all journalists who stand up for this ideal in a world in which democracy and freedom of the press face increasingly adverse conditions," she added. "Free, independent and fact-based journalism serves to protect against abuse of power, lies and war propaganda."
Muratov dedicated his award to six contributors to his Novaya Gazeta newspaper who had been murdered for their work exposing human rights violations and corruption. "Igor Domnikov, Yuri Shchekochikhin, Anna Politkovskaya, Stas Markelov, Anastasia Baburova, Natasha Estemirova - these are the people who have today won the Nobel Prize," Muratov said, reciting the names of slain reporters and activists whose portraits hang in the newspaper's Moscow headquarters.
In an interview with Reuters in Manila, Ressa called the prize "a global recognition of the journalist's role in repairing, fixing our broken world".
"It's never been as hard to be journalist as it is today," said Ressa, a 35-year veteran journalist, who said she was tested by years of legal cases in the Philippines brought by the authorities over the work of her Rappler investigative website. "You don’t really know who you are until you are forced to fight for it."
The prize is the first Nobel Peace Prize for journalists since the German Carl von Ossietzky won it in 1935 for revealing his country's secret post-war rearmament programme.
Muratov, 59, is the first Russian to win the peace prize since Soviet leader Mikhail Gorbachev in 1990. Gorbachev himself has long been associated with Muratov's newspaper, having contributed some of his Nobel prize money to help set it up in the early post-Soviet days when Russians expected new freedoms.
Ressa, 58, is the first individual winner of a Nobel prize in any field from the Philippines. Rappler, which she co-founded in 2012, has grown prominent through investigative reporting, including into large scale killings during a police campaign against drugs.
In August, a Philippine court dismissed a libel case against Ressa, one of several lawsuits filed against the journalist who says she has been targeted because of her news site's critical reports on President Rodrigo Duterte.
She was one of several journalists named Time Magazine Person of the Year in 2018 for fighting media intimidation, and her legal battles have raised international concern about the harassment of media in the Philippines, a country once seen as a standard bearer for press freedom in Asia.
In Moscow, Nadezhda Prusenkova, a journalist at Novaya Gazeta, told Reuters staff were surprised and delighted. "We're shocked. We didn't know," said Prusenkova. "Of course we're happy and this is really cool."
Russian journalists have faced an increasingly difficult environment in recent years, with many being forced to register as agents of foreign states, a designation that invites official paperwork and public contempt.
"We will leverage this prize in the interests of Russian journalism which (the authorities) are now trying to repress," Muratov told Podyom, a journalism website. "We will try to help people who have been recognised as agents, who are now being treated like dirt and being exiled from the country."
Reiss-Andersen said the Nobel committee intended the award to send a message about the importance of rigorous journalism at a time when technology has made it easier than ever to spread falsehoods. "We find that people are manipulated by the press, and ... fact-based, high-quality journalism is in fact more and more restricted," she told Reuters.
It was also was a way to shine a light on the difficult situations for journalists, specifically under the leadership in Russia and the Philippines, she added. "I don't have insight in the minds of neither Duterte, nor Putin. But what they will discover is that the attention is directed towards their nations, and where they will have to defend the present situation, and I am curious how they will respond," Reiss-Andersen told Reuters.
The Kremlin congratulated Muratov. "He persistently works in accordance with his own ideals, he is devoted to them, he is talented, he is brave," said spokesman Dmitry Peskov.
The award will give both journalists greater international visibility and may inspire a new generation of journalists, said Dan Smith, director of the Stockholm International Peace Research Institute. "We normally expect that greater visibility actually means greater protection for the rights and the safety of the individuals concerned," he told Reuters.
The Nobel Peace Prize will be presented on Dec. 10, the anniversary of the death of Swedish industrialist Alfred Nobel, who founded the awards in his 1895 will.