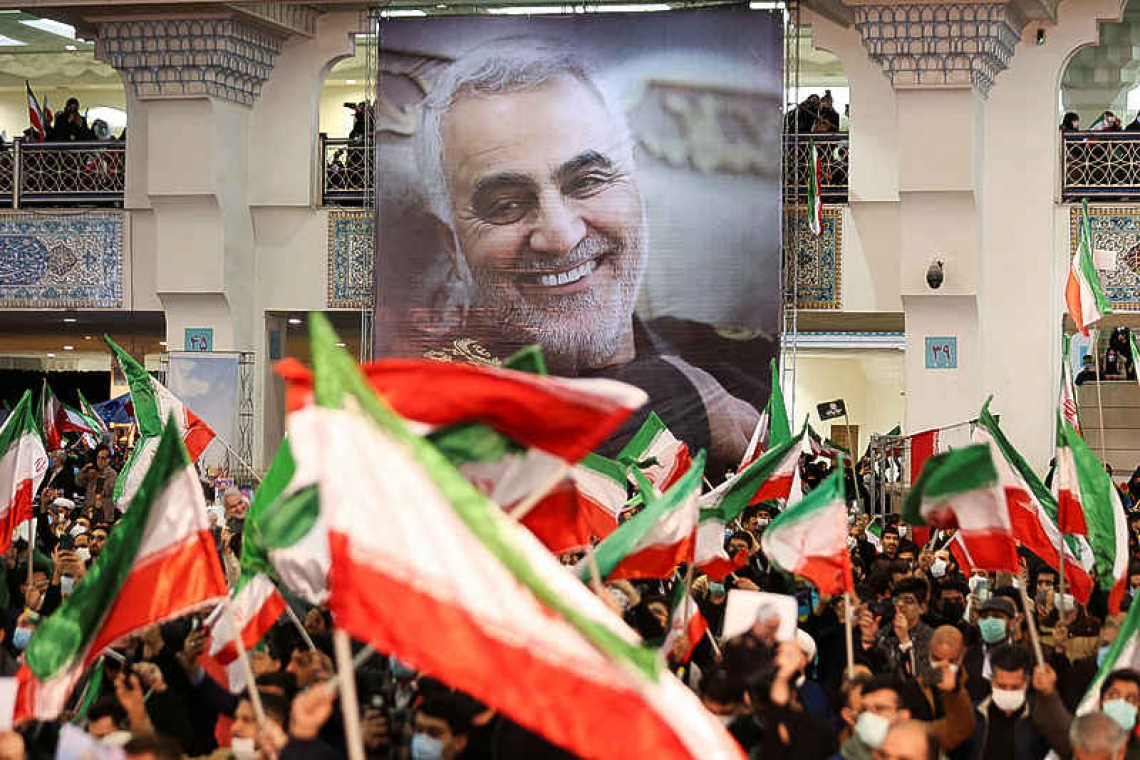 A banner of Qassem Soleimani, is seen during a ceremony to mark the second anniversary of the killing of senior Iranian military commander General Qassem Soleimani in a U.S. attack, in Tehran, Iran on Monday. (Majid Asgaripour/WANA (West Asia News Agency) via Reuters)

DUBAI--Iranian President Ebrahim Raisi, speaking on the second anniversary of the assassination of General Qassem Soleimani by the United States, said that former U.S. President Donald Trump must face trial for the killing or Tehran would take revenge.

Iran and groups allied with it in Iraq and other countries have been holding events to honour Soleimani, the commander of the Quds Force, the overseas arm of the elite Revolutionary Guards. He was killed in Iraq in a drone strike on Jan. 3, 2020, ordered by then President Trump.
"If Trump and (former secretary of state Mike) Pompeo are not tried in a fair court for the criminal act of assassinating General Soleimani, Muslims will take our martyr's revenge," Raisi said in a speech on Monday.
"The aggressor, murderer and main culprit - the then president of the United States - must be tried and judged under the (Islamic) law of retribution, and God's ruling must be carried out against him," Raisi added.
Under Iran's Islamic laws, a convicted murderer can be executed unless the family of the victim agree to take "blood money" through a reconciliation. Iranian judicial officials have communicated with authorities in nine countries after identifying 127 suspects in the case, including 74 U.S. nationals, Prosecutor-General Mohammad Jafar Montazeri told state television.
"The criminal former president (Trump) is at the top of the list," he said.
On Sunday, Iran urged the United Nations Security Council in a letter to hold the United States and Israel, which Tehran says was also involved in the killing, to account, Iranian media said.
Days after the assassination, the United States told the United Nations that the killing was self-defence. The then U.S. Attorney General William Barr said Trump clearly had the authority to kill Soleimani and the general was a "legitimate military target".
Hundreds of supporters of Iran-backed militia groups gathered on Sunday at Baghdad international airport to mark the anniversary of Soleimani's death and to chant anti-American slogans. Two armed drones were shot down on Monday as they approached an Iraqi military base hosting U.S. forces near Baghdad's international airport, Iraqi security sources said.
Late on Sunday, Yemen's Iran-aligned Houthi movement seized a United Arab Emirates-flagged cargo vessel which it said was engaged in "hostile acts" but which the Saudis said was carrying hospital equipment.
In Israel on Monday, the Jerusalem Post newspaper said its website had been hacked in what it called an apparent threat to the country, with an illustration that appeared to recall Soleimani.