In 'frank' talks, China accuses US of creating 'imaginary enemy' 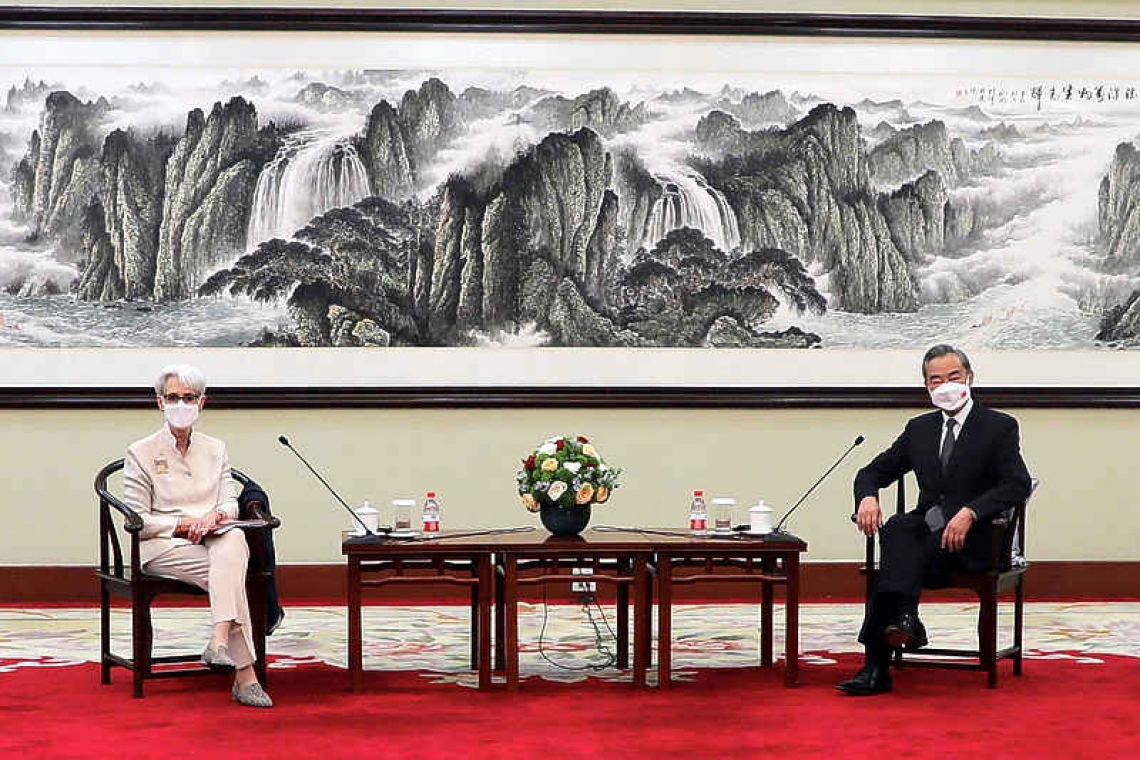 BEIJING--A top Chinese diplomat took a confrontational tone on Monday in rare high-level talks with the United States, accusing it of creating an "imaginary enemy" to divert attention from domestic problems and suppress China.

Amid worsening relations between the world's two largest economies, Deputy Secretary of State Wendy Sherman, the second-ranking U.S. diplomat, had face-to-face meetings with China's vice foreign minister in the northern city of Tianjin that the U.S. State Department described as "frank and open".
No specific outcomes were agreed and the prospect of a meeting between U.S. President Joe Biden and Chinese President Xi Jinping was not discussed, senior U.S. administration officials said following talks that lasted about four hours.
White House spokeswoman Jen Psaki said the prospect of a meeting between Biden and Xi did not come up during Sherman's meetings, though she added that she expects there will be some opportunity to engage at some point. "The President continues to believe in face-to-face diplomacy. That is something he has long been an advocate for. And we expect there will be some opportunity to engage at some point but it did not come up in the context of these meetings, and that was not the purpose of these meetings," Psaki told reporters.
China seized the early narrative, with state media reporting on confrontational remarks by Vice Foreign Minister Xie Feng soon after the session began, in echoes of a similarly combative opening by senior Chinese officials during high-level talks in March in Alaska.
Foreign media were kept at a distance from the site of the talks, held outside of Beijing due to COVID-19 protocols, but Chinese media were permitted on the premises. "The United States wants to reignite the sense of national purpose by establishing China as an 'imaginary enemy'," Xie was quoted as saying while the talks were underway.
The United States had mobilised its government and society to suppress China, he added. "As if once China's development is suppressed, U.S. domestic and external problems will be resolved, and America will be great again, and America's hegemony can be continued."
Sherman laid out U.S. concerns over China's actions on issues ranging from Hong Kong and Xinjiang to Tibet and cyber attacks, senior administration officials said, adding that China should not approach areas of global concern, such as climate and Afghanistan, on a transactional basis.
Sherman, who also met with State Councillor and Foreign Minister Wang Yi, raised additional concerns, including over what Washington sees as China's unwillingness to cooperate with the World Health Organization on a second phase investigation of the origins of COVID-19, and foreign media access in China. "The Deputy Secretary raised concerns in private – as we have in public – about a range of PRC actions that run counter to our values and interests and those of our allies and partners, and that undermine the international rules-based order," the State Department said in a statement.
"It is important for the United States and China to discuss areas where we disagree so that we understand one another's position, and so that we are clear about where each side is coming from," a senior administration official said.
"Reaching agreement or specific outcomes was not the purpose of today's conversations," a senior U.S. official said.
Psaki told reporters on Monday that while there are areas of concern with China, the two countries might align on areas such as climate and non-proliferation as well as on regional concerns such as North Korea, Iran, Afghanistan and Myanmar.
Sherman's China visit was added late to an Asian itinerary that included stops in Japan, South Korea and Mongolia amid wrangling over protocol between Beijing and Washington. On Saturday, Wang had warned that China would not accept the United States taking a "superior" position in the relationship, a day after China unveiled sanctions on former U.S. Commerce Secretary Wilbur Ross and others.
Relations between Beijing and Washington deteriorated sharply under former U.S. President Donald Trump, and the Biden administration has maintained pressure on China in a stance that enjoys bipartisan support but threatens to deepen mistrust. "When both countries see each other as an enemy, the danger is that it becomes a self-fulfilling prophecy," said Cheng Xiaohe, a professor of international relations at Renmin University in Beijing.