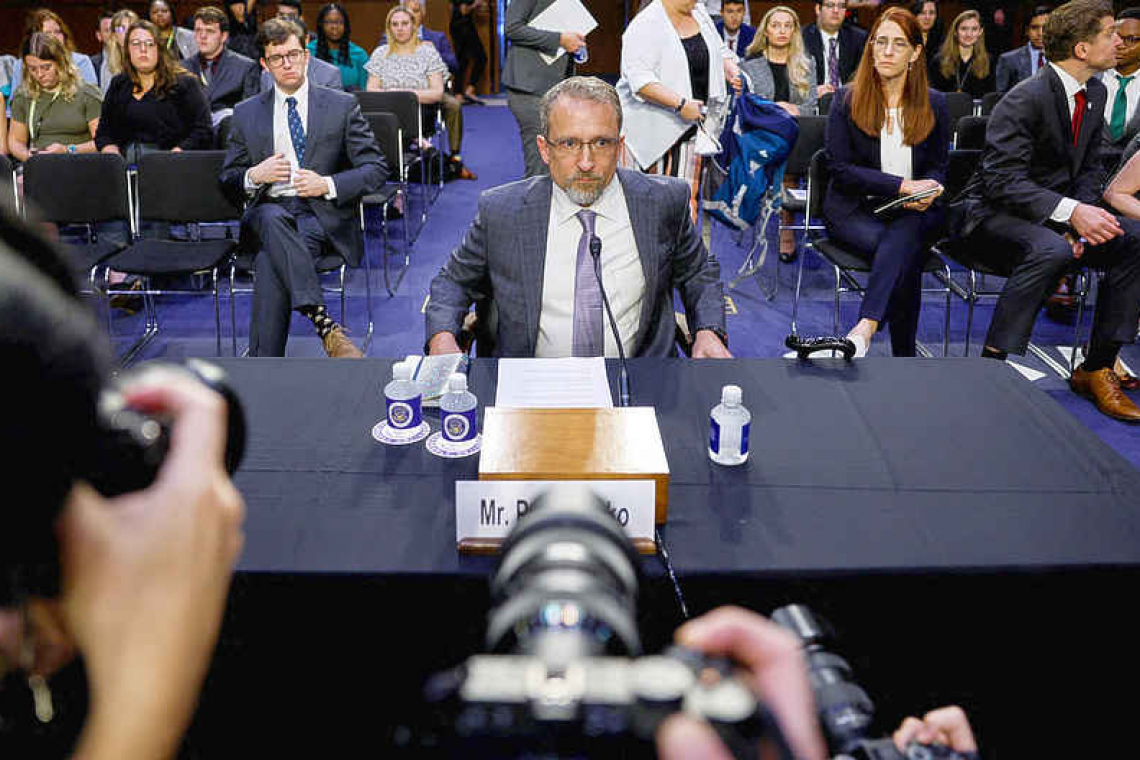 WASHINGTON--The FBI informed Twitter Inc of at least one Chinese agent working at the company, U.S. Senator Chuck Grassley said during a Senate hearing on Tuesday where a whistleblower testified, raising new concerns about foreign meddling at the influential social media platform.

Peiter "Mudge" Zatko, a famed hacker who served as Twitter's head of security until his firing in January, said some Twitter employees were concerned the Chinese government would be able to collect data on the company's users.
Twitter has come under fire previously for lax security, most notably in 2020 when teenage hackers seized control of dozens of high-profile accounts, including the verified profile of former U.S. President Barack Obama. On Tuesday, Zatko's testimony before the Senate Judiciary Committee revealed Twitter's security issues could be far more serious, alleging for the first time that the company was informed of agents of the Chinese government working at the social media firm.
Still, shares of Twitter rose almost 1% amid a sharp market selloff. The stock moves almost exclusively based on sentiment about whether billionaire Elon Musk will be forced to complete his $44 billion deal to buy the company, and the Tuesday gain suggested investors did not see any new details that could favour Musk's effort to abandon the deal.
And while Grassley, a Republican, wondered how Twitter CEO Parag Agrawal would keep his job if the allegations were true, many senators used the testimony to support legislation they had introduced to rein in the market power of Big Tech, with a few calling for immediate direct action against Twitter.
The allegations of a Chinese agent will pose a continuing public relations nightmare for Twitter, and investors will demand to know more, said Dan Ives, an analyst at Wedbush Securities.
During his testimony, Zatko referenced a Reuters story on Tuesday that detailed internal clashes between some teams that wanted to maximize the advertising revenue opportunity from Chinese advertisers and others who were concerned about doing business inside China amid rising geopolitical tensions. "This was a big internal conundrum," Zatko said, adding the company was reluctant to turn away from China as the fastest- growing overseas market for ad revenue.
"In a nutshell, if we were already in bed, it would be problematic if we lost that revenue stream," he said.
Zatko said on Tuesday that in the week before he was fired from Twitter, he learned the FBI told the company an agent of China's Ministry of State Security, or MSS, the country's main espionage agency, was on the payroll at Twitter. A Twitter spokesperson said the hearing "only confirms that Mr. Zatko's allegations are riddled with inconsistencies and inaccuracies."
The spokesperson added that Twitter's hiring process is independent of foreign influence and access to data is managed through background checks and monitoring and detection systems.
Zatko said on Tuesday he recalled a conversation with another Twitter executive about concerns that a foreign agent was inside the company. The executive responded "Well, since we already have one, what does it matter if we have more?"
Grassley noted that Agrawal refused to appear at the hearing for fear it could jeopardize the company's litigation against Elon Musk, who is also the chief executive officer of Tesla Inc. Twitter and Musk head to trial next month over whether the billionaire's takeover deal should be completed.
Twitter shareholders approved Musk’s buyout of the company, Twitter said on Tuesday after a virtual special meeting of stockholders. The San Francisco-based company sued Musk for terminating the agreement, while Musk countersued, accusing Twitter of misrepresenting the number of false and spam accounts on its service.
Little of what Zatko said appeared to be particularly helpful for getting Musk out of the deal, according to Ann Lipton, a professor at Tulane University Law School. The deal contract excludes legislative changes that Congress might adopt and Zatko said fines by the FTC are priced into the business. Lipton said that suggests regulatory action against Twitter will not rise to the level of a material event that could nullify the deal agreement.
The lack of evidence to support Zatko's claims that Twitter did not have sufficient controls for spam bots also will not help Musk's legal team, which has used the issue in an attempt to end the deal, Ives said.
A Delaware judge ruled last week that Musk may include Zatko's whistleblower claims in his case against Twitter, but denied his request to delay the trial.