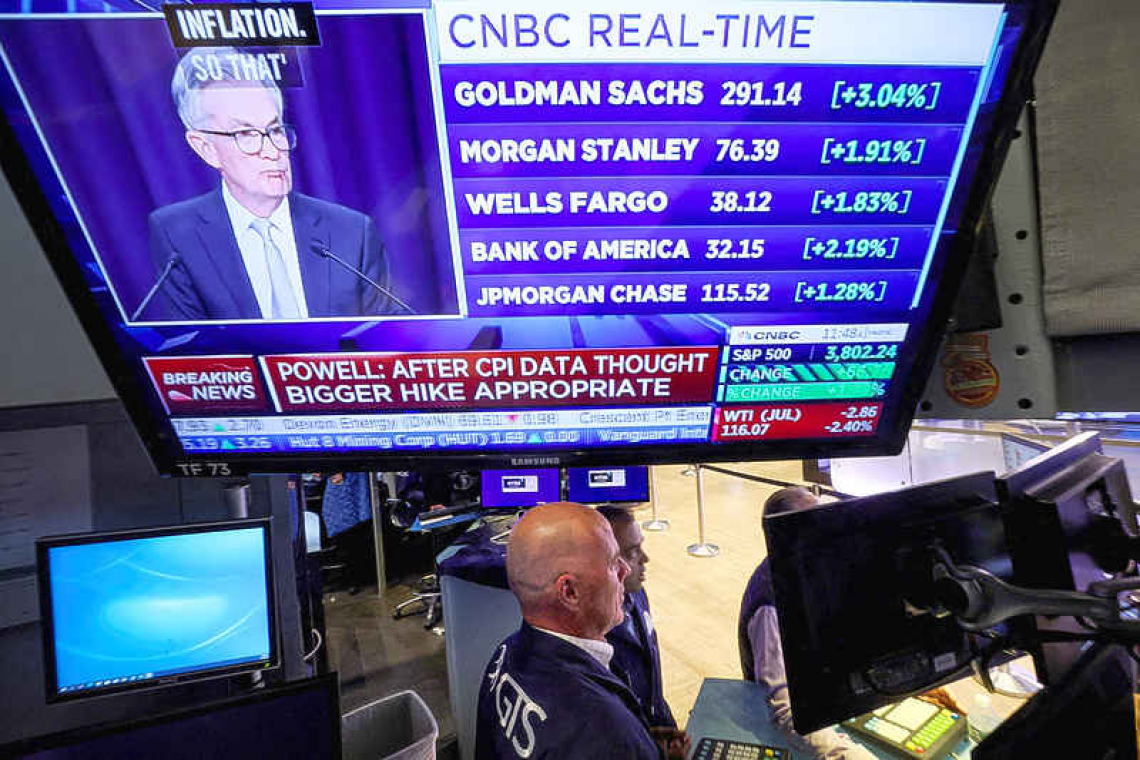 WASHINGTON--The Federal Reserve on Wednesday approved its largest interest rate increase in more than a quarter of a century to stem a surge in inflation that U.S. central bank officials acknowledged may be eroding public trust in their power, and being driven by events seen increasingly out of their hands.

The widely expected move raised the target federal funds rate by three-quarters of a percentage point to a range of between 1.5% and 1.75%, still comparatively low by historic standards. But the Fed's hawkish commitment to controlling inflation has already touched off a broad tightening of credit conditions being felt in U.S. housing and stock markets, and likely to slow demand throughout the economy - the Fed's intent.
Officials also envision steady rate increases through the rest of this year, perhaps including additional 75-basis-point hikes, with a federal funds rate at 3.4% at year's end. That would be the highest level since January 2008 and enough, Fed projections show, to slow the economy markedly in coming months and lead to a rise in unemployment.
"We don't seek to put people out of work," Fed Chair Jerome Powell said at a news conference after the end of the Fed's latest two-day policy meeting, adding that the central bank was "not trying to induce a recession."
Yet the Fed chief's remarks were among his most sobering yet about the challenge he and his fellow policymakers face in lowering inflation from its current 40-year high, to a level closer to its 2% target, without a sharp slowdown in economic growth or a steep rise in unemployment. "Our objective really is to bring inflation down to 2% while the labour market remains strong ... What's becoming more clear is that many factors that we don't control are going to play a very significant role in deciding whether that's possible or not" Powell said, citing the war in Ukraine and global supply concerns.
"There is a path for us to get there ... It is not getting easier. It is getting more challenging," he told reporters, noting that the rate hikes announced last month and in March so far had not only failed to slow inflation, but allowed it to continue accelerating to a level that recent data indicates have begun to influence public attitudes in a way that could make the Fed's job even harder.
A survey released on Friday showed consumer inflation expectations jumped sharply in June, a result Powell called "quite eye-catching," and enough to tilt policymakers towards a larger 75-basis-point hike in hopes of making faster progress on the inflation front and retaining public trust that price increases will slow.
"This is something we need to take seriously," Powell said of the change in consumer inflation expectations. "We're absolutely determined to keep them anchored."
The faster pace of rate hikes outlined by officials on Wednesday more closely aligns monetary policy with the rapid shift that took place this week in financial market views of what it will take to bring price pressures under control. Bond yields fell after the release of Fed projections on Wednesday that showed economic growth slowing to a below-trend rate of 1.7%, and policymakers expecting to cut interest rates in 2024. Stocks on Wall Street ended the day higher.
Interest rate futures markets also reflected about an 85% probability that the Fed will raise rates by 75 basis points at its next policy meeting in July. For September's meeting, however, the greater probability - at more than 50% - was for a 50-basis-point increase.
Powell, departing from the firmer guidance he has previously given about future rate increases, made no promises on Wednesday. Given an unexpected jump in a monthly inflation report on Friday and the jump as well in expectations, "75 basis points seemed like the right thing to do at this meeting, and that's what we did," he said.
But he said rate hikes of that size were not likely to "be common," and that when Fed policymakers gather in July an increase of either half a percentage point or three-quarters of a point would be "most likely."