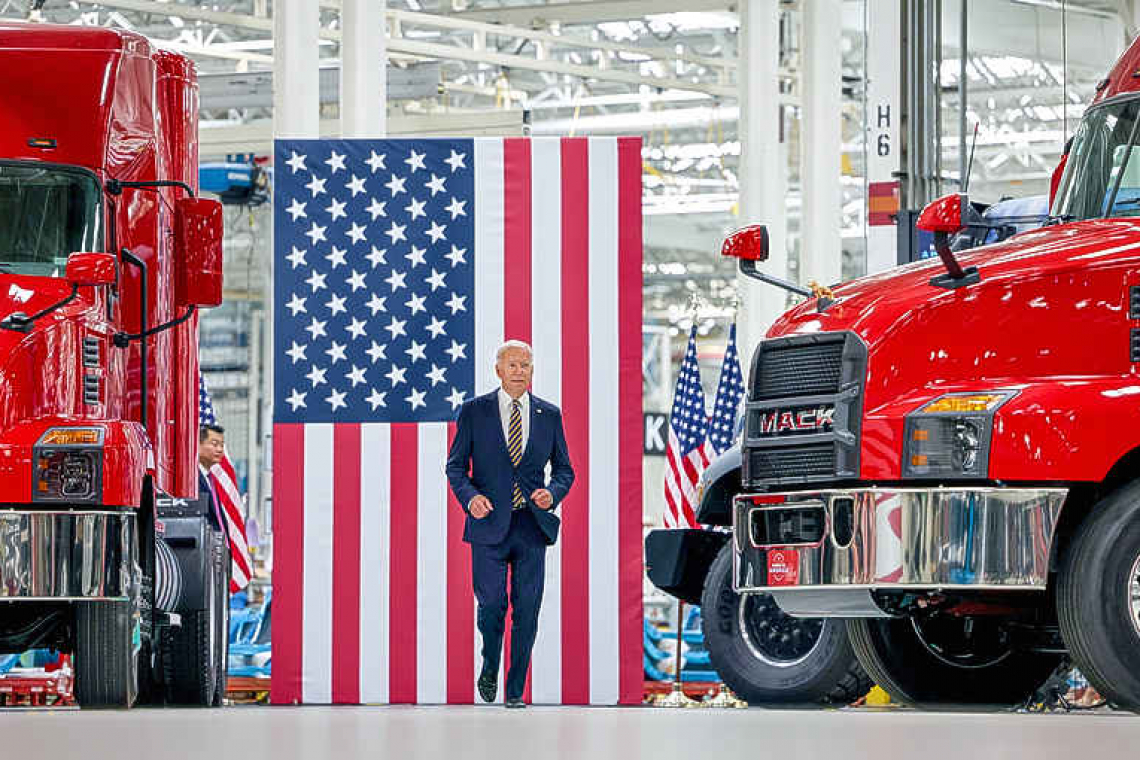 LOWER MACUNGIE TOWNSHIP, Pennsylvania--President Joe Biden vowed to boost U.S. manufacturing on Wednesday by increasing the amount of American-made content of products bought with taxpayers dollars, a "buy American" policy that he said would help working-class people and unions.

Biden's trip to the Lehigh Valley area of Pennsylvania took place as congressional negotiators back in Washington reached a bipartisan deal on infrastructure aimed at rebuilding roads and bridges and the like.
Biden met local members of the United Autoworkers Union (UAW), which represents 85% of the 2,500 workers at Mack Trucks' Lehigh Valley plant, and received a briefing on the new electric-powered garbage truck the company is piloting in New York City and North Carolina. Afterward, he doffed his suit coat, rolled up his shirtsleeves and spoke to a crowd with a backdrop of trucks parked behind him.
Biden said "buy American" in recent years has become a "hollow promise," an apparent reference to buy American polices pushed by his predecessor, Republican President Donald Trump. "My administration is going to make Buy American a reality," he said.
The Democratic president had signed an executive order during his first week in office in January aimed at harnessing the vast buying power of the federal government - the world's biggest single buyer of consumer goods - to bolster U.S. manufacturing. The new rules unveiled Wednesday followed dozens of meetings with industry and interagency discussions over the past 180 days, officials said. They would expand existing "Buy American" provisions, which apply to about a third of the $600 billion in goods and services the federal government buys each year.
If approved, they would raise the minimum U.S. content for manufactured goods from 55% to 60% immediately, and then to 65% in 2024 and 75% in 2029. Biden vowed there would be enforcement of the content rule. "We're going to check it," he said.
UAW President Ray Curry welcomed the new proposal, saying the president was making good on his promise to focus public policy on shoring up good-paying union jobs for Americans. "Joe Biden understands what it means to prevent companies from off-shoring those jobs and making sure that we reverse the trend," Curry said in a statement. "Welcome Mr. President."
Interested parties will have 60 days to comment on the changes before the rule is finalized, the officials said. The rule also proposes enhanced price preferences for certain critical products and components, a move that officials said would help bolster domestic production of critical goods and materials.
And it would boost transparency by requiring manufacturers to report the total domestic content of their products, instead of simply certifying that they meet the content threshold.
The new rule would not apply to services, which account for more than half the annual $600 billion in government procurement by the Department of Defense and other agencies, officials said. Nor is it expected to have an immediate impact on supply chain bottlenecks such a global shortage of semiconductors that has slowed auto manufacturing and boosted inflation. The officials said the Biden administration would continue to address those logjams through other measures.