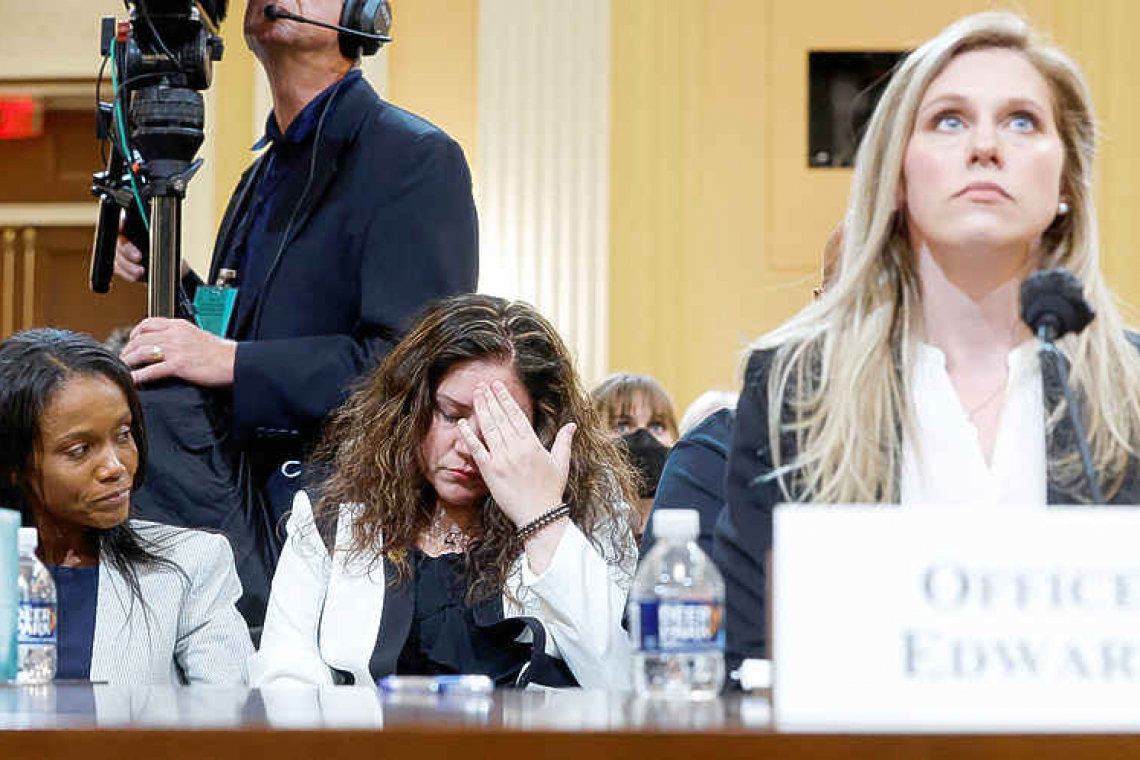 Serena Liebengood, widow of Capitol Police officer Howie Liebengood, comforts Sandra Garza, partner of Brian Sicknick, as they attend the hearing of the U.S. House Select Committee to Investigate the January 6 Attack on the United States Capitol, on Capitol Hill in Washington, U.S., on Thursday.

WASHINGTON--A congressional hearing into the U.S. Capitol attack by Donald Trump's supporters trying to overturn his 2020 election defeat presented testimony on Thursday showing that close allies - even his daughter - rejected his false claims of election fraud.
The House of Representatives select committee investigating the Jan. 6, 2021, assault also showed graphic footage of thousands of rioters attacking police and smashing their way into the Capitol during the first of its six hearings intended to show that Trump tried to subvert the U.S. Constitution and unlawfully hold onto power.
The hearing presented video of testimony or public statements from key Trump administration figures including his daughter Ivanka Trump and her husband Jared Kushner, Vice President Mike Pence and his chief of staff, Attorney General William Barr and General Mark Milley. It featured a clip of Trump's incendiary speech before the riot in which he repeated his false claims of election fraud and directed his supporters' anger at Pence, who was at the Capitol overseeing the congressional certification of Joe Biden's win.
"Aware of the rioters' chants, to 'Hang Mike Pence,' the president responded with this sentiment: 'Well, maybe our supporters have the right idea," said Representative Liz Cheney, one of the two Republicans on the nine-member panel and its vice chair.
Barr in video testimony called the election fraud claims "bullshit," an argument that convinced Trump's daughter. "I respect Attorney General Barr. So I accepted what he was saying," Ivanka Trump said in videotaped testimony.
Democratic U.S. Representative Bennie Thompson, the committee's chairman, said Trump was at the center of a conspiracy to thwart American democracy. "Jan. 6 was the culmination of an attempted coup, a brazen attempt, as one writer put it shortly after Jan. 6, to overthrow the government," Thompson said "... The violence was no accident. It was Trump's last stand."
Since leaving office last year, Trump has kept up his false claims that his 2020 election loss was the result of widespread fraud, an assertion that has been rejected by multiple courts, state election officials and members of his own administration. "We can't live in a world where the incumbent administration stays in power based on its view, unsupported by specific evidence, that there was fraud in the election," Barr, who resigned before Trump left office, said in the video.
Trump, publicly flirting with another White House run in 2024, issued a statement before the hearing calling the committee "political Thugs."
Kushner was shown on video dismissing threats by members of Trump's Cabinet to resign after the riot, saying he considered their concerns as "whining."
The hearing also will feature two in-person witnesses, U.S. Capitol police officer Caroline Edwards, who sustained a traumatic brain injury in the attack, and Nick Quested, a filmmaker who captured footage of the far-right Proud Boys group, accused of planning the deadly attack. Other Capitol Police officers who fought with rioters on Jan. 6 were present in the audience for the hearing including Officer Harry Dunn, who wore a T-shirt bearing the word "insurrection" and Officer Michael Fanone, who was beaten and electrocuted with a Taser during the attack. Some House Democrats who are not panel members also attended.
The hearings begin about five months before the Nov. 8 midterm elections that will determine which party controls both the House and the Senate for the following two years.
The pro-Trump mob failed to prevent Congress from certifying Biden's victory, attacking police and causing millions of dollars in damage. Four people died the day of the attack, one fatally shot by police and the others of natural causes. More than 100 police officers were injured, and one died the next day. Four officers later died by suicide.
"Those who invaded our Capitol and battled law enforcement for hours were motivated by what President Trump had told them: That the election was stolen and that he was the rightful president," Cheney said. "President Trump summoned the mob, assembled the mob and lit the flame of this attack."