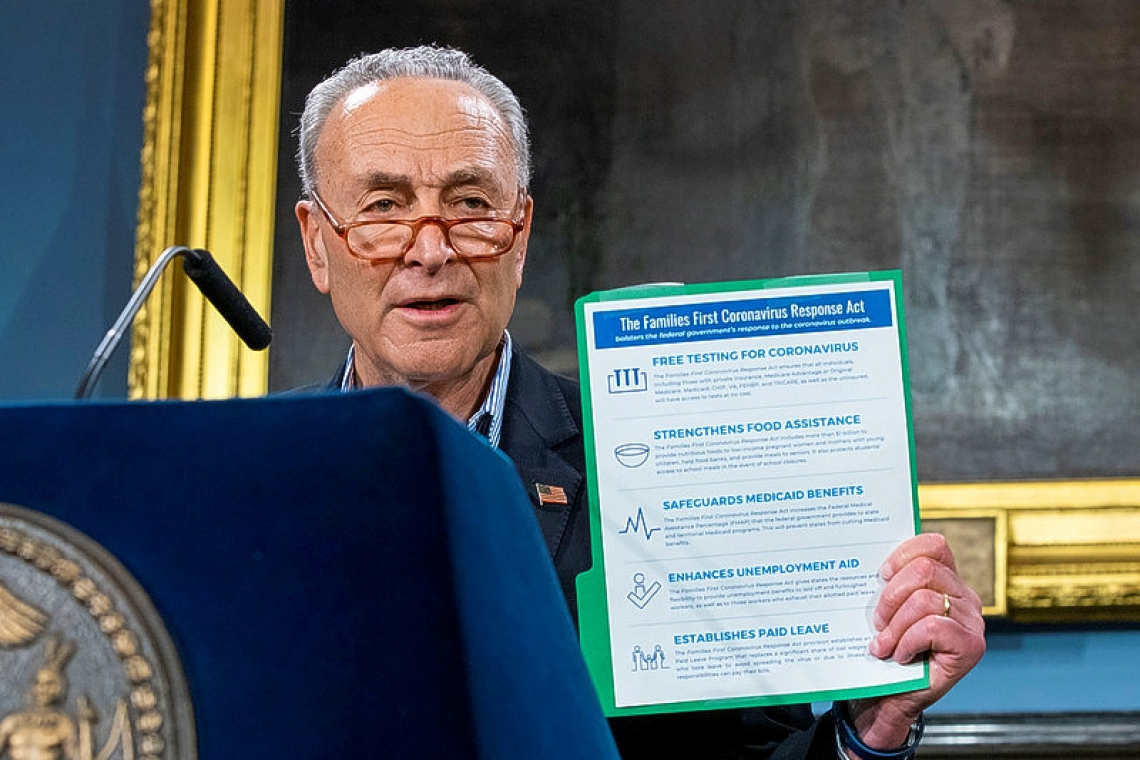 WASHINGTON--President Donald Trump's administration and leading Republicans urged the Senate on Monday to swiftly back a House-passed coronavirus aid plan and seriously consider massive new economic stimulus legislation that was still under development.

As he left meetings with Senate leadership, Treasury Secretary Steven Mnuchin said he was seeking a "big number" for additional economic stimulus legislation to counter the virus' impact. "We will be looking for support for small and medium-sized businesses, we'll be looking for support for certain industries that we've talked about that are particularly hard hit. I've talked about airlines, hotels, others, and we will be looking at a general stimulus,” Mnuchin said.
Eric Ueland, the White House legislative liaison, said congressional action on the next coronavirus stimulus package needed to be fast and unimpeded by the potential price tag. "We can't let weeks and months get under our feet here. We need to be very swift," Ueland said.
The pressure from the Trump administration came as the Senate grappled over what to do with the multibillion-dollar coronavirus economic stimulus bill passed by the Democratic-run House of Representatives on Saturday. It was already the second measure of its kind. Previously, Congress passed and Trump signed an $8.3 billion package to battle the coronavirus.
Senate Majority Leader Mitch McConnell told reporters the Senate was “anxious” to get the latest House-passed bill, which was on its way to his chamber. He said he hoped senators would "pass it" once it arrived.
That was likely to happen now that the House passed a set of technical fixes to the bill on Monday evening that appeared to have the support of Democratic and Republican leaders in the House.
The tally of confirmed U.S. coronavirus cases has multiplied in recent weeks, now surpassing 4,300. At least 80 people in the United States have died of the respiratory virus, which has pummeled financial markets and upended daily life, with sweeping restrictions on many social activities.
Republican Senator Marco Rubio, also emerging from the session with Mnuchin and Ueland, said the Senate would need to create a mechanism to get liquidity to small businesses, so that they could continue to operate and pay their employees, including those who are home. The continued operation of the airlines was a matter of national security, Rubio said.
Rubio said the Senate would work to pass the third measure this week containing the much-larger stimulus, because of uncertainty about the Senate schedule caused by the coronavirus outbreak. “I don’t think we can assume that we can keep reconvening the Senate every week," he said.
Neither administration officials nor Senate leaders were yet willing to say such a large bill could move that quickly through the Senate. Those concerns were echoed earlier in the day by Republican Senator Mitt Romney, who proposed sending $1,000 to each adult American to help "meet their short-term obligations and increase spending in the economy."
Senate Democrats were also talking on Monday about big aid measures to come. Senate Democratic leader Chuck Schumer urged an additional $750 billion to address the crisis.
"We will need big, bold, urgent federal action to deal with this crisis," Schumer said. He outlined a plan to fund a range of emergency operations, including boosting hospital capacity, expanding jobless benefits, delivering help to small businesses and funding childcare for healthcare workers. The proposal approached the magnitude of the response to the 2008 financial crisis.