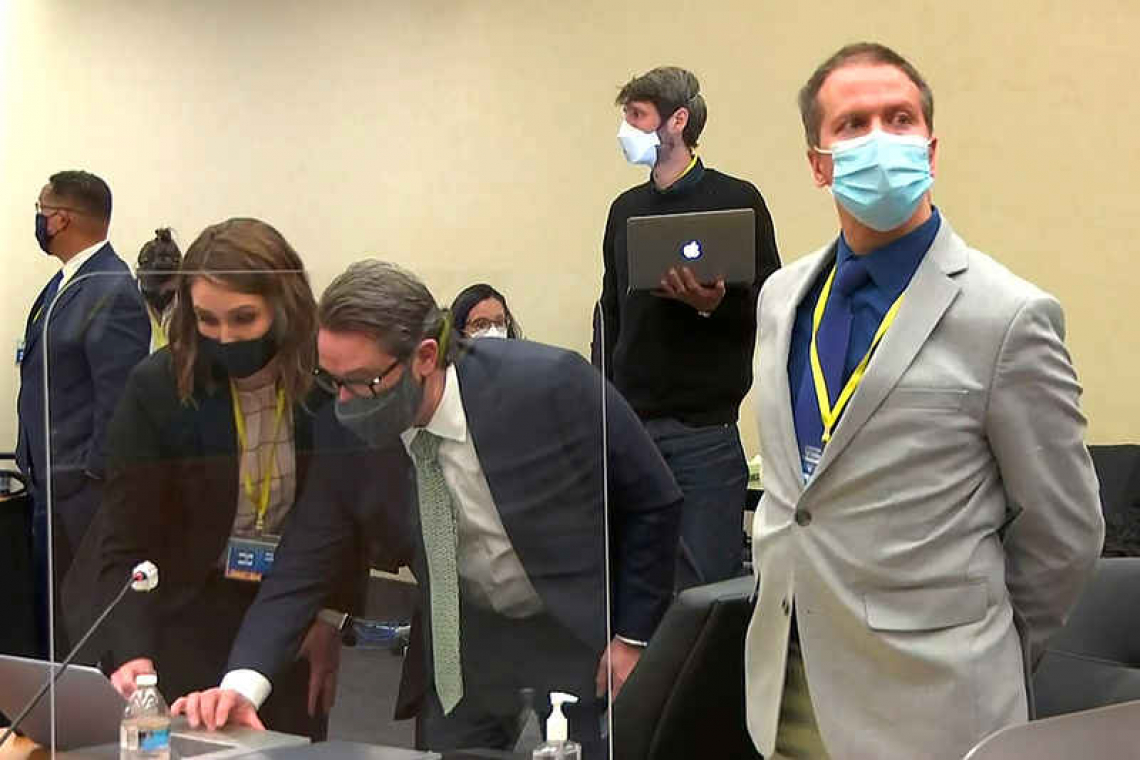 MINNEAPOLIS--Jurors in the murder trial of Derek Chauvin began deliberations on Monday after a prosecutor implored them to "believe your eyes" as he replayed video of the former Minneapolis police officer kneeling on a dying George Floyd's neck.

Chauvin's lead lawyer, Eric Nelson, countered in his own closing argument that Chauvin behaved as any "reasonable police officer" would, saying that he followed his training from 19 years on the force.
Over and over again, Steve Schleicher, a prosecutor with the Minnesota Attorney General's office, repeated a phrase: "Nine minutes and 29 seconds" — the length of time Chauvin was captured on video on May 25, 2020, with his knee on Floyd's neck.
Hennepin County District Judge Peter Cahill gave the jury final instructions before it left the courtroom at 4 p.m. to begin deliberations. Jurors adjourned after four hours and were sequestered in a hotel. Deliberations resume on Tuesday.
Although the verdict will be seen as a reckoning of the way the United States polices Black people, Schleicher emphasized in remarks that lasted nearly two hours that the jury was weighing the guilt of only one man, not a system.
"This wasn't policing; this was murder," Schleicher told jurors. He cited the motto of the Minneapolis Police Department, which fired Chauvin and three other officers after Floyd's arrest: "To protect with courage and to serve with compassion."
"Facing George Floyd that day that did not require one ounce of courage, and none was shown on that day," Schleicher said, often speaking with audible anger and disgust. "All that was required was a little compassion and none was shown on that day."
Chauvin, who is white, knelt on Floyd, a 46-year-old handcuffed Black man, outside the grocery store where Floyd had been accused of buying cigarettes with a fake $20 bill. Bystanders filmed and screamed at Chauvin to get off and check Floyd's pulse.
"He was trapped with the unyielding pavement beneath him, as unyielding as the men who held him down," Schleicher said, playing a clip of video he said showed Chauvin mocking Floyd's struggle to breathe.
Chauvin has pleaded not guilty to second-degree unintentional murder, third-degree "depraved mind" murder and second-degree manslaughter. Nelson, his lawyer, said prosecutors were wrong to dismiss his theory that carbon monoxide poisoning from the nearby police car's exhaust and Floyd's use of the opioid fentanyl may have contributed to Floyd's death. He repeated a single phrase scores of times, saying Chauvin behaved as a "reasonable police officer" would with a man as "large" as Floyd, who was struggling against being put in a police car when Chauvin arrived, responding to a call for backup.
Chauvin, dressed in a gray suit and blue shirt and tie, removed his face mask, part of the coronavirus pandemic's social-distancing requirements, and watched jurors listen to his lawyer, who spoke for nearly three hours.
In a final rebuttal, Jerry Blackwell, another prosecutor, scoffed at the carbon monoxide theory. "What 'reasonable police officer,' when apprehending someone on the ground, subdues them and puts their face in front of a tailpipe of a car, and then thinks that's a defense?" he asked.