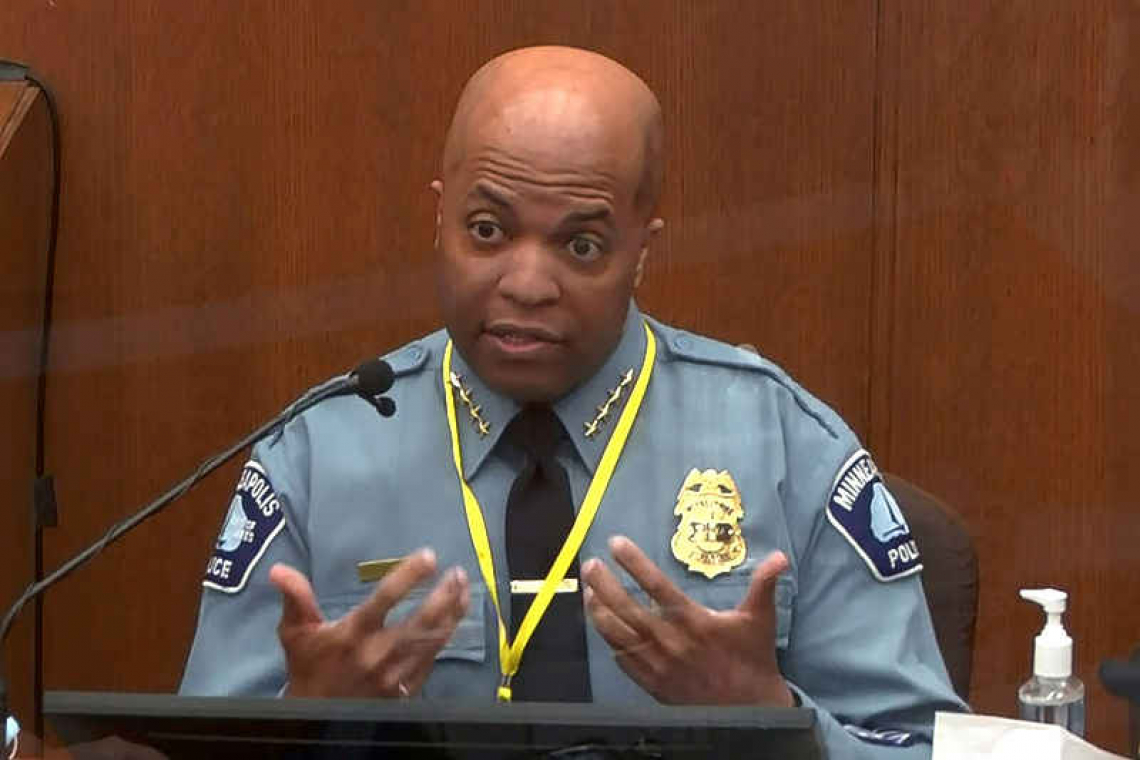 MINNEAPOLIS--Derek Chauvin violated Minneapolis Police Department rules and its ethics code on respecting the "sanctity of life" during the deadly arrest of George Floyd last May, the city's police chief testified at the former officer's murder trial on Monday.

"It's not part of our training, and it is certainly not part of our ethics and our values," said Chief Medaria Arradondo, referring to how Chauvin, who is white, held his knee on the neck of Floyd, a 46-year-old Black man, for more than nine minutes. A bystander's video of Floyd's dying moments sparked global protests against police brutality.
Over 3-1/2 hours of testimony, Arradondo disputed the defense's claim that Chauvin, who has pleaded not guilty to murder and manslaughter charges, was following the training he had received in his 19 years on the force.
According to law experts who track police prosecutions, it is highly unusual for a city's senior police official to testify that one of his former subordinates used excessive force. Chauvin, who along with three other officers was fired by Arradondo a day after the arrest, sat nearby in a suit, taking notes.
In opening statements last week, a prosecutor told the jury that it would hear from Arradondo, who would not "mince words." Last year, the chief released a statement castigating Chauvin, saying: "This was murder — it wasn't a lack of training."
On Monday, he appeared dressed in a blue uniform, placed his chief's hat on a ledge in front of him with its golden badge visible to the jury, and spoke with his hands clasped in front of him. "I vehemently disagree that that was appropriate use of force for that situation on May 25," he said.
He said officers are trained to treat people with dignity and are sworn to uphold the "sanctity of life." They are trained in basic first aid and given annual refresher courses, be it in tying a tourniquet to a bleeding gunshot victim or using a naloxone inhaler to reverse an opioid overdose.
Chauvin failed to follow his training in several respects, Arradondo said. He could tell from Floyd's grimaces that Chauvin was using more than the maximum "light-to-moderate" pressure an officer is allowed to use on someone's neck.
The officer did not relent in using deadly force even as Floyd fell unconscious and he did not provide the mandated first aid to a dying Floyd, Arradondo said. "It's contrary to our training to indefinitely place your knee on a prone, handcuffed individual for an indefinite period of time," he said, echoing testimony last week by the department's most senior homicide investigator who called Chauvin's use of force "totally unacceptable."
In cross-examination, Eric Nelson, Chauvin's lead lawyer, began with getting Arradondo to say it had been "many years" since he himself had made an arrest. "I'm not trying to be dismissive," Nelson said. He also had Arradondo agree with him that a police officer's use of force is often "not attractive."
Arradondo was at home on the night of Floyd's death when a deputy chief called him to say a "critical" situation appeared to have unfolded at the intersection outside a food store where Floyd was arrested on suspicion of using a counterfeit $20 bill to buy cigarettes.
That Floyd was taken into custody at all was unusual, Arradondo said, given it was a non-violent misdemeanor. He said he called the state agency that investigates any case where police kill someone. He then called Mayor Jacob Frey, who in 2017 appointed Arradondo as the first Black person to lead the city's police, and headed downtown to his office in City Hall.
The first video he saw, a long shot taken on a city surveillance camera across the street, did not show him much. But shortly before midnight, he got a call from someone "in the community."
"They said almost verbatim: 'Have you seen the video of your officer choking and killing that man at 38th and Chicago?'" Arradondo recalled. "Eventually, within minutes of that, I saw for the first time what is now known as the bystander video."
He could see how long Chauvin had kept Floyd pinned facedown, and concluded it was in breach of his department's "principles and values."