'Like an eternal flame': Americans honour the fallen on 20th anniversary of Sept. 11 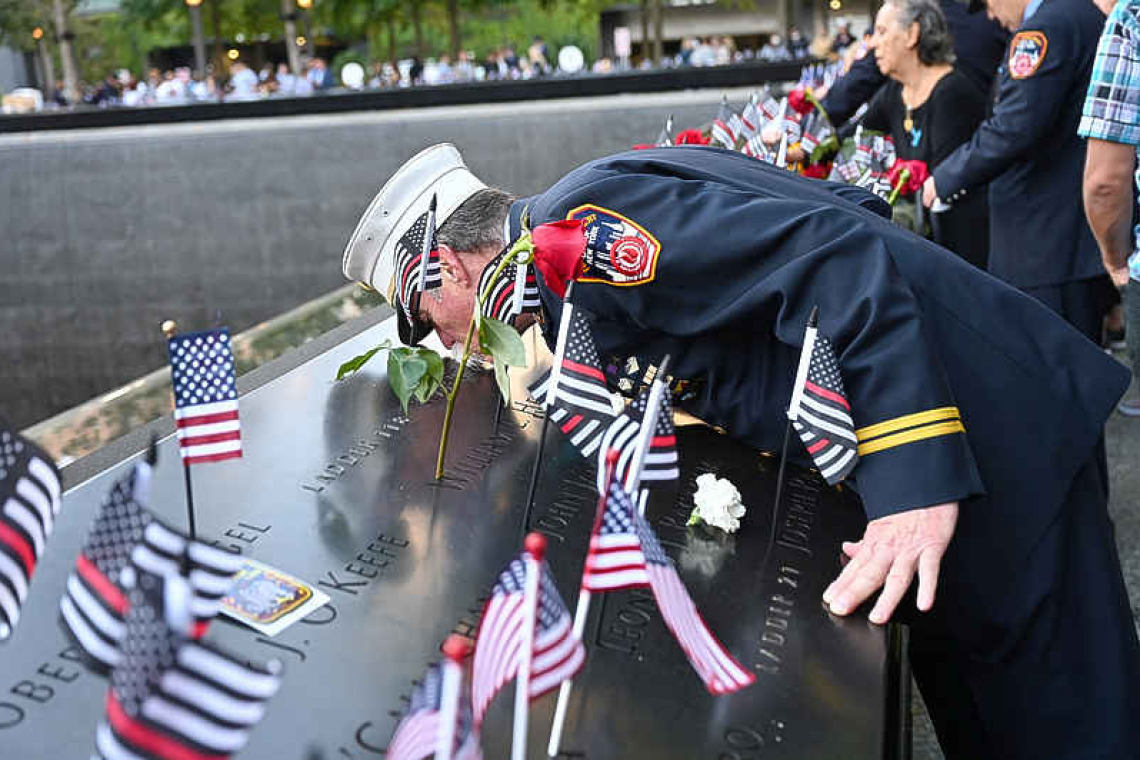 NEW YORK--Twenty years after hijackers slammed airplanes into New York City's World Trade Center and the Pentagon outside Washington, Americans came together on Saturday to remember the nearly 3,000 killed on Sept. 11, 2001, and reflect on how the attacks reshaped society and tipped the country into an intractable war.

As a first responder struck a silver bell, the ceremony at the Sept. 11 Memorial in lower Manhattan began with a moment of silence at 8:46 a.m. EDT, the exact time the first of two planes flew into the World Trade Center's twin towers. President Joe Biden was in attendance, his head bowed.
Mike Low, the first speaker of the day, described the "unbearable sorrow" caused by the death of his daughter, Sara, a flight attendant on the airliner that hit the North Tower.
"My memory goes back to that terrible day when it felt like an evil specter had descended on our world, but it was also a time when many people acted above and beyond the ordinary," he said. "A legacy from Sara, that burns like an eternal flame."
Relatives then began to read aloud the names of 2,977 victims to the thousands who had gathered on the cool, clear morning, among them former President Barack Obama and Hillary Clinton, New York's junior senator at the time of the attacks.
Bruce Springsteen sang "I'll See You in My Dreams". Uptown at Lincoln Center dancers performed in silver and white robes, signifying the ashes and purity of those who perished in the deadliest attack on U.S. soil.
After leaving ground zero, Biden and first lady Jill Biden headed to Shanksville, Pennsylvania, where United Airlines Flight 93 was downed after passengers fought to regain control of the hijacked plane. His final visit was to the Pentagon, headquarters of the U.S. Defense Department in Arlington, Virginia, to pay respects to the 184 people who died there in the crash of American Airlines Flight 77.
The remembrances have become an annual tradition but Saturday had special significance, coming 20 years after the morning that many view as a turning point in U.S. history, a day that gave Americans a sense of vulnerability that has deeply influenced the country's political life since then.
In a painful reminder of those changes, only weeks ago U.S. and allied forces completed a chaotic withdrawal from the war the United States started in Afghanistan in retaliation for the attacks, and which became the longest conflict in U.S. history. And the COVID-19 pandemic, which so far has claimed more than 655,000 lives in the United States, continues.
In a ceremony at the Pentagon, the chairman of the Joint Chiefs of Staff, Army General Mark Milley recognized the 2,461 U.S. service members killed in Afghanistan, including 13 during last month's disorderly exit, as what he called a "terrible chapter in our nation's history" was brought to a close.
Speaking in Shanksville, former President George W. Bush, who took office eight months before Sept. 11 altered the trajectory of his presidency, said the unity shown then was a far cry from the rifts now dividing Americans.
"Malign force seems at work in our common life that turns ever disagreement into an argument and every argument into a clash of cultures," he said, warning of the growing risk of domestic extremism. "So much of our politics has become a naked appeal to anger, fear and resentment."
Former President Donald Trump, who Democrats and even some Republicans blame for a coarsening of U.S. politics, issued a video criticizing Biden's handling of the Afghanistan exit. He did not attend the memorial service but spoke at a police precinct near his Trump Tower home in midtown Manhattan, repeating his lie that the 2020 election was "rigged" and telling officers they could stamp out crime if they were allowed to police without constraints.
At sunset, 88 powerful lightbulbs projected twin beams four miles (6.4 km) into the sky to mirror the fallen towers. This year, buildings across Manhattan, including the Empire State Building and the Metropolitan Opera, joined the commemoration by illuminating their facades in blue.
Also marking the anniversary, the New York Mets and New York Yankees baseball teams played each other on Saturday evening as part of a special Subway Series, their first game on Sept. 11 since the attacks. The players wore caps bearing logos for the New York City Fire Department and other first responders.
The 20-year milestone arrives as political leaders and educators fret over the thinning collective memory of that day. Some 75 million Americans - nearly a quarter of the estimated U.S. population - have been born since Sept. 11, 2001.
At her home on Long Island, Danielle Salerno, 50, and her children dug a hole in the backyard and planted a weeping cherry blossom tree in a tribute to her late husband, a broker at Cantor Fitzgerald who was on the North Tower's 104th floor.
She had their son Jack, now 19, baptized on the first anniversary and wanted to honour John "Pepe" Salerno with "something that grows and blossoms" for the 20-year milestone. Once the tree was in the ground, she poured champagne on the soil in a toast to John, with friends and family on hand.
For some, the tumultuous events in Afghanistan compounded the psychological toll of the day, raising questions about whether the U.S. military's mission there was in vain. "I love America and my fellow Americans, but I am ashamed about how we are handling our exit and my heart breaks for those whose lives have been lost or destroyed by our actions," said Wells Noonan of Greenwich, Connecticut, whose brother Robby was among those killed in the North Tower on Sept. 11, 2001.