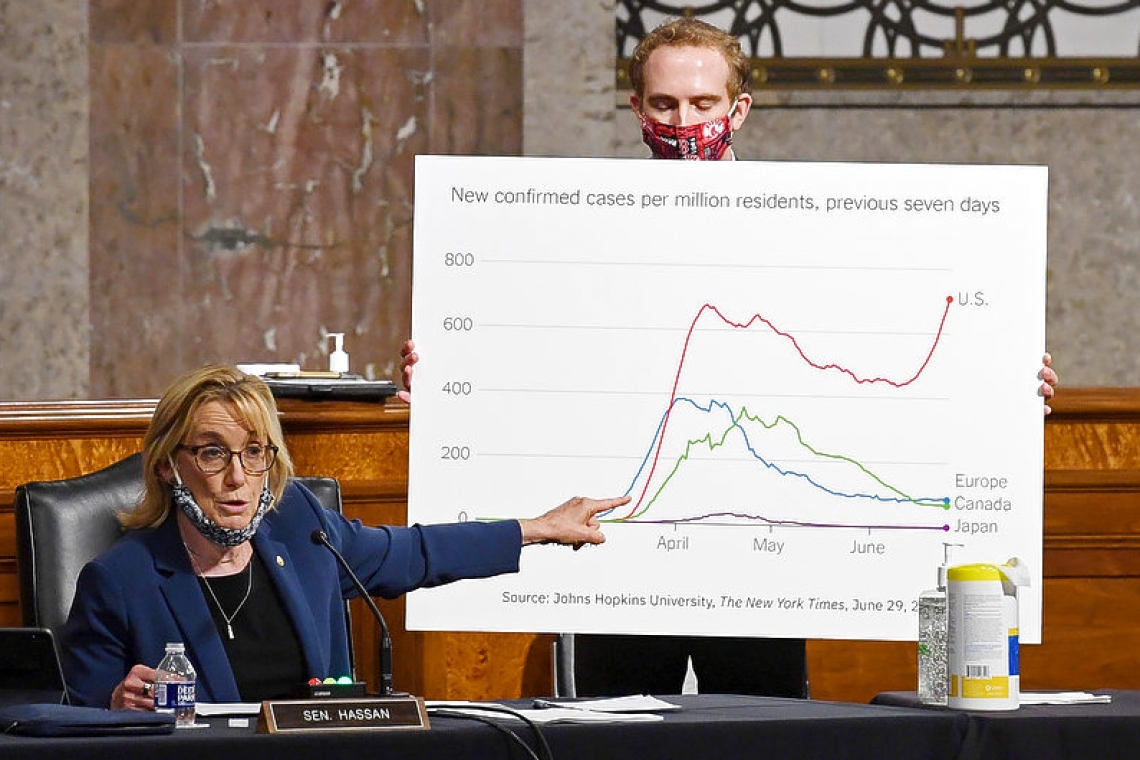 WASHINGTON--Governors of U.S. states hit hardest by the resurgent coronavirus moved to halt or reverse steps to reopen their economies on Wednesday, led by California, the nation's most populous state and a new epicenter of the pandemic. The moves came as a Reuters/Ipsos poll found Americans increasingly worried about the spread of COVID-19, the serious and sometimes fatal illness caused by coronavirus.

"The spread of this virus continues at a rate that is particularly concerning," California Governor Gavin Newsom, a first-term Democrat, said in ordering the closure of bars, bans on indoor dining at restaurants and restrictions on other indoor operations in 19 counties affecting over 70% of the state's population.
The move in California, the first U.S. state to impose sweeping "stay-at-home" restrictions on its residents in March, will likely inflict more financial pain on the owners of bars and restaurants who have struggled to survive the pandemic. The epicenter of the country's COVID-19 epidemic has moved from the Northeast to California, Arizona and New Mexico in the West along with Texas, Florida and Georgia.
Texas again topped its previous record on Wednesday with 8,076 new cases, while South Carolina reported 24 more coronavirus deaths, its single-day high. Tennessee and Alaska also had record numbers of new cases on Wednesday.
The United States recorded its biggest one-day increase of nearly 48,000 new infections on Tuesday, more than 8,000 each in California and Texas, a Reuters tally showed.
New Mexico Governor Michelle Grisham, a Democrat, on Wednesday extended the state's emergency public health order through July 15, saying that authorities would "aggressively" enforce mandatory mask rules.
"I want to be as clear as I can possibly be: New Mexico, in this moment, still has the power to change the terrible trajectory of this virus," Grisham said. "But our time is limited. And we are staring down the barrel of what Texas, Arizona and many other hard-hit states are grappling with."
Indiana's Republican Governor Eric Holcomb halted his state's phased reopening until at least mid-July. "We just have to accept the fact ... that again this virus is on the prowl and it is moving, and it's moving even within our borders,” he said.
New York Mayor Bill de Blasio, a Democrat whose city was for months at the center of the U.S. outbreak, said on Wednesday he would postpone a plan to allow indoor restaurant dining on Monday. “We see a lot of problems and we particularly see problems revolving around people going back to bars and restaurants indoors, and indoors is the problem more and more,” de Blasio told reporters.