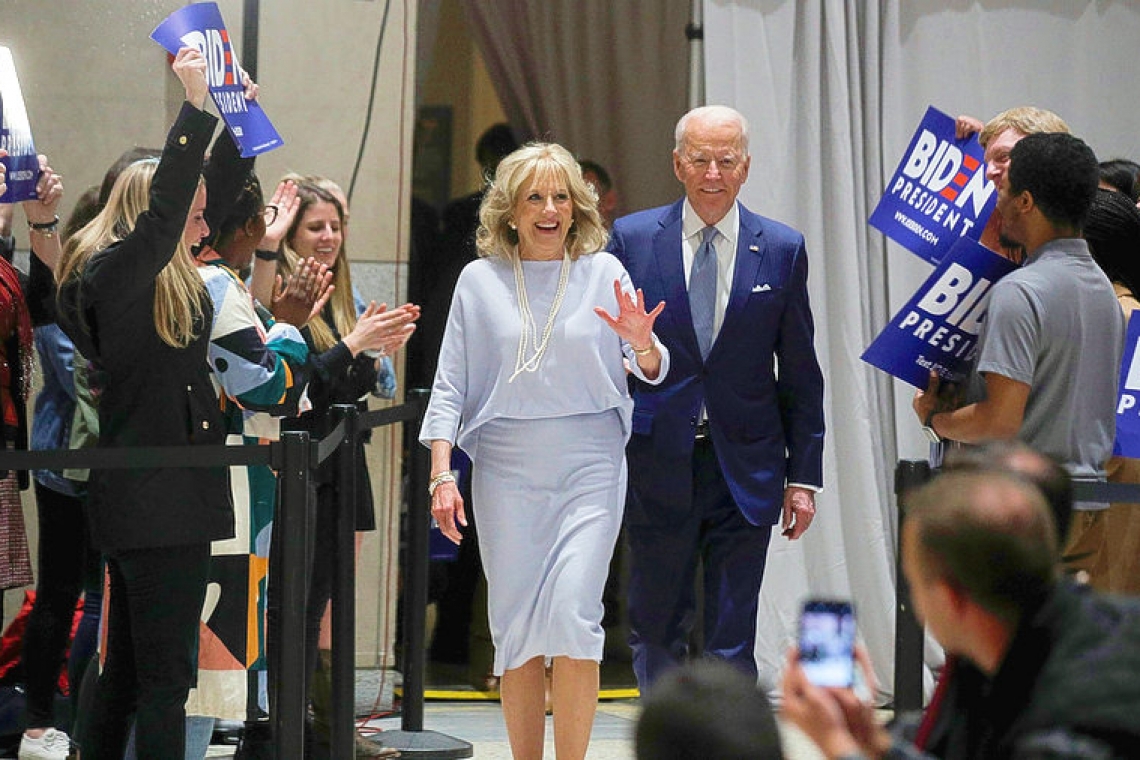 WASHINGTON--With Bernie Sanders on the ropes in the race for the Democratic Party nomination, Joe Biden can turn his attention now to a November matchup against Republican Donald Trump, backed by momentum in states that decide U.S. presidential elections.

Biden dominated Sanders in Tuesday's contests in three states, including Florida and Arizona, both known as political battlegrounds because their voters can swing to either party and so decide who takes the White House. Defying the coronavirus that has upended life in America as in the rest of the world, turnout was robust in both states - many people voted early - suggesting that enthusiasm to defeat Trump remains high among Democrats.
Broad swaths of voters ensured Biden's success. Edison Research said these included women, African Americans and white rural voters. It was the same last week when Biden won Michigan, also likely to be decisive in the Nov. 3 election.
Perhaps most significant is that the centrist former vice president, 77, appears to be reaching the same moderate suburban voters who helped Democrats seize control of the U.S. House of Representatives in the 2018 congressional elections. "We are seeing turnout spike in affluent, highly-educated suburban areas – precisely the kinds of places where the GOP has slipped since 2016 and where at least some formerly Republican voters appear to be more open to voting Democratic than in the past," said Kyle Kondik, an analyst at the University of Virginia Center for Politics.
While Kondik warned that primary voting is not always a reliable indicator of general election turnout, Biden's success could bode well in a battle with Trump, 73, the former businessman and reality TV star seeking a second four-year term.
Democrats have placed Arizona, Florida and Michigan at the top of their target list since 2016, when Trump took all three states. Former President Barack Obama, a Democrat and Biden's former boss, won all three in his 2012 re-election campaign.
Biden crushed Sanders on Tuesday in the areas around such cities as Miami, Orlando and Tampa in Florida. With votes still being counted in Arizona, he was up by 10 percentage points over Sanders in all-important Maricopa County, home to 60% of the state's population.
Biden showed similar dominance last week in the suburbs around Detroit, areas critical in November's election.
Turnout in Florida was up slightly over 2016 despite many voters staying home because of the pandemic. In Arizona, the number of mail-in ballots returned before the primary, 480,000, surpassed the number of total votes cast four years ago.
In a Democratic race once defined by such rabble-rousing outsiders as U.S. Senators Sanders and Elizabeth Warren, Biden has trumpeted his many decades in government to project the image of a calm steward amidst a national emergency. Voters favoured him over Sanders to handle a crisis by more than 2-to-1 in Florida and Arizona, according to Edison Research interviews.
Priorities USA Action, a top Democratic super PAC, said the coronavirus crisis, with the economy reeling and American daily life being dramatically refashioned, means trouble for Trump. “We can’t predict the future of this pandemic, but Trump’s disastrous handling of the response so far makes him more vulnerable everywhere regardless of demographics,” said Josh Schwerin, a spokesman for the group, which plans to spend millions of dollars in support of Biden.
Biden on Tuesday improved his performance with Latino voters key to Democrats' fortunes. In his victory remarks, he appealed also to younger voters drawn to the more liberal Sanders for his policies on climate change, education and economic reform.
Opinion polls conducted by NBC News and Monmouth University show Biden with a slight edge in a head-to-head contest with Trump in Arizona. The news has been worse for Trump in Florida, where a poll this month showed 40% of voters believe he deserves a second term, and that was before the coronavirus outbreak intensified.