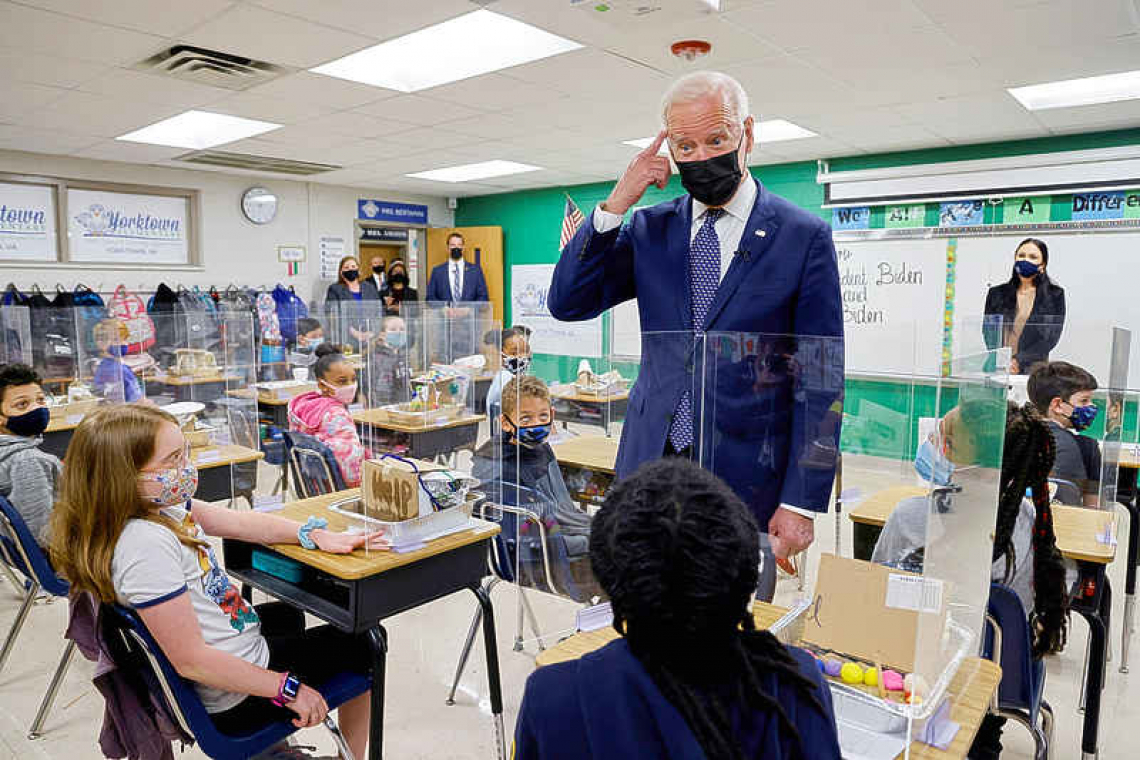 NORFOLK, Virginia--President Joe Biden on Monday called on wealthy Americans and corporations to pay their "fair share" to fund free community college and other benefits for workers as he promoted his sweeping jobs and safety-net plans in Virginia.

Speaking at Tidewater Community College in the port city of Norfolk, Biden said his proposed expansion of the U.S. public education system would rebalance the economy and benefit lower-income Americans.
The United States could provide two free years of post-secondary education by raising the top income tax rate to the level it was in 2001, Biden said. He has proposed increasing the top marginal rate for the wealthiest Americans to 39.6% from 37%.
"The choice is about who the economy serves. And so I plan on giving tax breaks to the working-class folks and making everybody pay their fair share," he said.
The Democratic president faces significant opposition from Republicans to his tax and spending plans, even with his promise that individuals making less than $400,000 annually will not be affected. Democrats hold slim majorities in the U.S. House of Representatives and Senate.
Biden has vowed to work with lawmakers from both parties, but no Republicans voted for his $1.9 trillion pandemic relief package, the biggest legislative achievement of Biden's presidency so far. He may have less than two years to fulfill his big campaign promises if Republicans win control of one or both chambers of Congress in the November 2022 election.
The president and top administration officials are traveling the country to stir up enthusiasm for his proposals in the hopes that public support will translate to Republican votes in Congress. On Monday, Biden, joined by his wife, community college professor Jill Biden, reviewed science projects with a class of fifth-grade students at an elementary school in nearby Yorktown before visiting the community college. The students had clear shields in front of their desks as a guard against the coronavirus.
The school visits are part of a tour to sell Biden's $2.3 trillion plan to rebuild roads, broadband and other infrastructure, and a social-spending package that includes $1 trillion on education and childcare over 10 years and $800 billion in tax credits aimed at middle- and low-income families.
The second plan would expand America's 13 years of free public schooling at both ends, adding two years of preschool for 3-and 4-year olds and two years of community college for those who have completed high school. Funded by higher taxes on corporations and wealthy Americans, the two proposals taken together would amount to the biggest domestic spending initiative since the 1960s.
"It is paid for by making sure corporate America and the wealthiest 1% pay their fair share," Biden said.
Biden and other advocates promote community college as an affordable, accessible gateway to a wide range of careers, from nursing to advanced manufacturing. During the United States' industrial heyday in the 20th century, workers could easily find factory jobs that paid a middle-class wage with only a high school degree or less. But globalization and automation have spurred employers to demand a higher level of skills, including deeper technical knowledge and broader critical-thinking abilities, according to Georgetown University's Center on Education and the Workforce.
Now, two out of three U.S. jobs require some sort of education or training beyond high school. Community colleges typically provide two years of education, leading to either an associate's degree or a start on a four-year college degree.
Roughly 11.8 million students were enrolled in 1,044 U.S. community colleges in 2019, according to the American Association of Community Colleges. Tuition averaged $3,770 a year, about one-third of the cost of a four-year public college.