Venus and the slim crescent moon: Looking up at the Nightsky 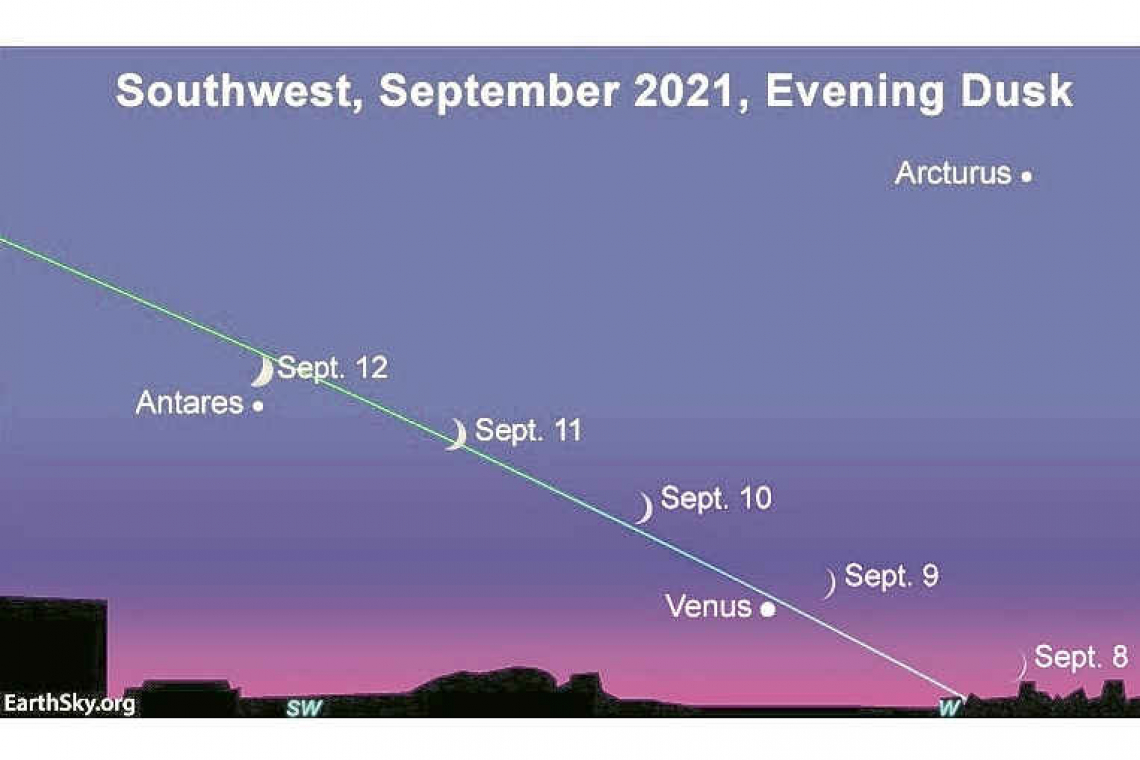 Venus remains the most brilliant object in our sky, other than of course the sun and the moon. Often designated as the evening star or the morning star, Venus is not truly a star but a planet. Along with Mars, Mercury, Saturn and Jupiter, Venus is a planet easily seen with the unaided eye. Mercury is always a visual challenge, being dim and tiny, but also generally located in close proximity to the bright sun. Mars is currently transiting behind the sun. Saturn and Jupiter are easily located this weekend and we will look at those in coming paragraphs, but first let’s discuss Venus.

Venus is a world shrouded in thick clouds, and so your binoculars or telescope won’t show anything too exciting; it simply appears as a white disc. Those clouds offer a great deal of reflectivity, though, which partly explains why she shines so bright. Many people are confused how Venus can be the morning star for part of the year, but also the evening star for part of the year.

That is all about the geometry of our solar system, especially the Venus-Earth-Sun alignment. Because Venus’ orbital path is inside of the Earth’s orbital path, there are times when we see Venus on the “morning side” of the sun, leading the sun through the sky to our eyes. At these times, Venus rises before the sun, heralding the dawn. But at other times, such as now, Venus is on the “evening side” of the sun and it follows the sun through the sky – at least that is how it appears from our earthbound perspective.

In this arrangement, the sun sets first, the blue sky turns to dusk, and Venus shines from the western edge of the sky, our Evening Star. Venus, by nature of her place relative to us, never appears farther from the sun than about 35 degrees. Consider that 90 degrees can be visualized by pointing one arm directly overhead and the other arm directly to the side. Divide that angle into thirds and you get a close approximation of the maximum distance Venus will ever be away from the sun.

Look for Jupiter and Saturn halfway up in the south-eastern sky after sunset. Both are currently in the constellation Capricornus, the Goat with a tail of a fish. And unlike with Venus, get out your binoculars to see some lovely details.

Jupiter is more eastward, or to the left as you gaze up at these two giant gas-dense planets. Jupiter is also cloudy, but unlike Venus, Jupiter’s clouds are streaked with colours. Yellows and oranges and browns can be observed swirling around, and the Great Red Spot, observed since Galileo turned the first lens up to the heavens, represents a huge storm that has been churning in Jupiter’s atmosphere for at least 400 years. Jupiter’s moons are also visible with a scope and are such a blessing to behold, four tiny lights arranged in a straight line, extending away from Jupiter’s equator a considerable distance, but held by Jupiter’s massive gravitational pull.

Saturn is another blessing, hanging gracefully in the star strewn sky. It is the most distant of the five visible planets. Use your binoculars or telescope to view her amazing rings, circling this planet like a shining disc. These are ice bits and dust, studied by the unmanned space probes since 1979 when Pioneer 11 made a flyby and took some close up photos. More recently, in 2004, the Cassini-Huygens mission examined Saturn’s many moons and made discoveries that would fill this entire newspaper! After in-depth analysis, in 2011, NASA scientists reported that one of Saturn’s moons, Enceladus, “is emerging as the most habitable spot beyond Earth in the Solar System for life as we know it.”