The Year of the Water Rabbit: Chinese New Year 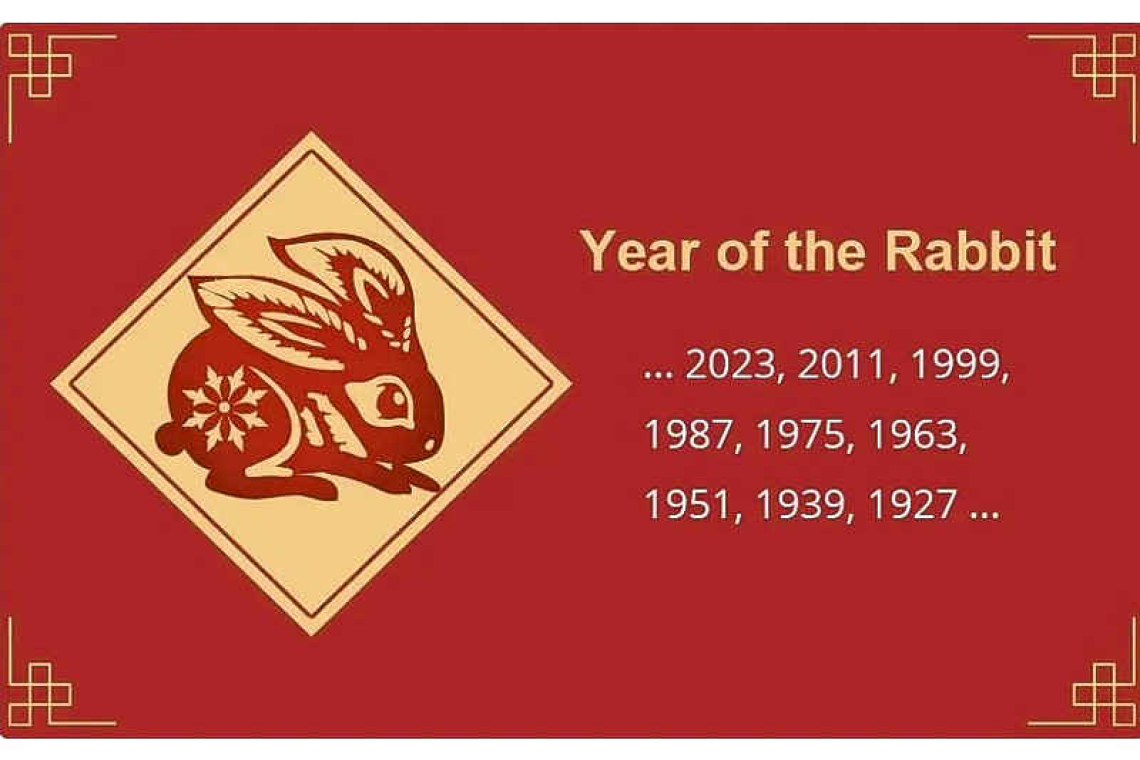 ~A year full of excitement, prosperity, and surprises~

The Chinese New Year usually falls in late January or early February. This year 2023, it fell on Sunday, January 22, and celebrations culminate with the Lantern Festival on February 5.

The date marks the transition between zodiac signs: 2022 was the Year of the Tiger; 2023 is the Year of the Rabbit. According to The Woks of Life, the rabbit represents patience, peace, and prosperity; so hopefully the year of the Water Rabbit will be a peaceful and auspicious year for everyone.

The following excerpts from ChineseNewYear.net explain some of the elements of the Zodiac sign.

The Rabbit is the fourth of all zodiac animals. Legend has it that Rabbit was proud – arrogant even – of his speed. He was the neighbour of Ox and always made fun of how slow Ox was. One day, the Jade Emperor said the zodiac order would be decided by the order in which the animals arrived at his party. Rabbit set off at daybreak, but when he got there, no other animals were in sight. Thinking that he would obviously be first, he went off to the side and napped. However, when he woke up, three other animals had already arrived. One of them was Ox, whom Rabbit had always looked down upon.

The Rabbit is also associated with the Earthly Branch mǎo and the hours five-seven in the morning. In the terms of yin and yang, the Rabbit is yin.

Rabbits are earnest with everything they do; they just ask that others treat them the same way.

Paired with the Celestial Stems, there is a 60-year calendrical cycle. Although mǎo is associated with metal, the years also cycle through the five elements of nature [the others being fire, wood, water, earth. In 2023, the element is water. -ed.].

Personality and Characteristics: To outsiders, the Rabbit’s kindness may make it seem soft and weak. In truth, the Rabbit’s quiet personality hides its confidence and strength. Rabbits are steadily moving towards their goal, no matter what negativity others give them.

With their good reasoning skills and attention to detail, they make great scholars. They are socializers with an attractive aura. However, they find it hard to open up to others and often turn to escapism.

A plain and routine life is not their style. Though conservative and careful in their actions, they need surprises every so often to spice things up.

For the Water Rabbit in particular: These Rabbits had financial hardships during youth, but are able to turn unfortunate events around. During the elderly years, money must be spent to preserve longevity.

Men born in the Rabbit year are extraordinarily polite and do whatever they can to avoid conflicts. They have control over themselves and are sometimes conservative. They may seem to be a yes-man, but they have a bottom line that they won’t cross.

These men like organizing and decorating, and often help their wives with chores. But that doesn’t mean they actually like being responsible for the home. Though a great friend, they don’t like becoming too close to someone.

Women born in the Rabbit year love being social. They are thoughtful and treat everyone politely. They are very conscious of their public image and hate violence and arguments.

In love, they are very extreme. There’s a clear difference between who they love and who they don’t. And they rarely pass that line. But if they love someone, they’ll put everything into the relationship. But the deeper they go, the more hurt they can get. These Rabbits are more insecure than other zodiacs and need to be reassured often.

This year 2023 is the Year of Rabbit, which means those who were born in previous Rabbit years will be “Fan Tai Sui”, indicating a year characterized by many fluctuations in luck, when your highs are very high, but lows can be quite devastating as well.

On the one hand, there are two auspicious stars – Tian De and Yue De – that will watch over Rabbits in 2023, although there will be a few less than auspicious stars at play at the same time. Health, wealth (in particular expenses) and safety are areas the Rabbit needs to keep a careful eye over. Thanks to Tian De, Rabbit’s career should see a dramatic boost with the timely help of one or more fated mentors.

Even so, it’s up to the Rabbit to keep an upbeat attitude to life and work, which will help them sail through difficult patches with patience and resolution, while in the good times, their positivity will attract the attention of those in positions of power to extend a hand that could prove decisive for Rabbit’s fame and fortune for the next 12 years.

In any case, this should be a year full of excitement, prosperity, and surprises that run in both directions – anything but boring for dear Rabbits!

Read up on Love & Relationships, Careers, Wealth, Education, Health, and more on ChineseNewYear.com, The Woks of Life, and other dedicated websites.

Happy Chinese New Year to all who celebrate it!