The movement of the moon: Looking up at the Nightsky 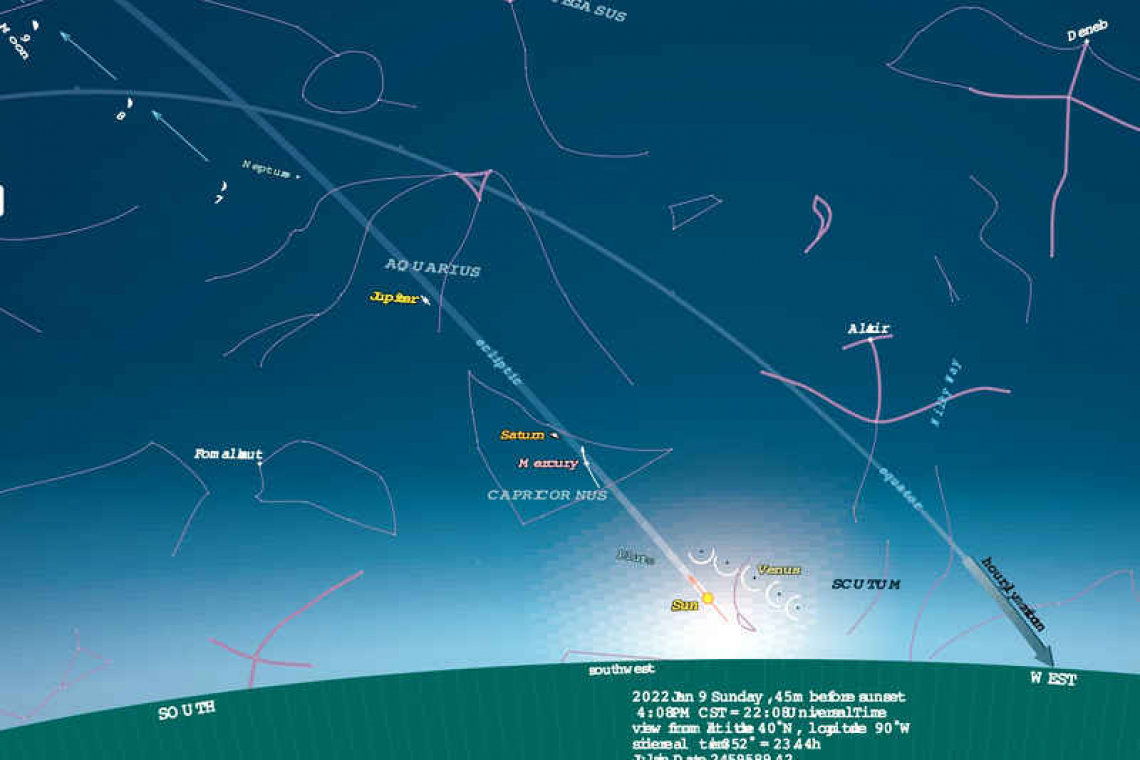 This weekend, the crescent moon is widening out to almost a half moon. By Sunday night, we will be at the cusp between the first quarter and the second quarter of the lunar cycle, which means when the sun sets on Sunday, look up, the moon should appear exactly like a half circle and at that moment, it will be in the apex position – in other words, overhead.

Watch over the next three hours as the moon glides down to the western horizon, setting around midnight. This leaves the sky dark and delightful for the remainder of the night, perfect for star- and planet-gazing. Friday and Saturday night, the moon will be skinnier and set even earlier – so, overall, this is a great weekend for getting out the binoculars or telescope and turning our focus to those points of interest.

Any evening this weekend just after sunset, look to the Western sky to see three planets in a line, reaching from the horizon to about 30 degrees up to the left or south. You’ll see Mercury at the horizon, setting soon after sunset, followed closely by Saturn, which sits a bit higher. Admittedly, Mercury will be difficult to discern. Mercury and Saturn both currently sit within the stars of the constellation Capricornus. The diagonal line extends up to Jupiter, currently edging into the constellation of Aquarius. The loneliest star, Fomalhaut, lies to the left of this diagonal line of planets, creating an almost equilateral triangle with Saturn and Jupiter.

If you could extend this line in the other direction, it would go through the sun and then line up with Mars. That’s right! Mars is back in our sky, but you have to rise early, before the sun, to see the red planet. We will watch all year as Mars heads toward a more dominant and bright appearance, peaking almost a year from now in December.

Right now, though, Mars is just barely visible, and not without some effort. Look in the direction of sunrise, before the sun comes up. The thin waning crescent moon will aid in your discovery of Mars this weekend. You will likely see a second red star-like object, but it isn’t Mars, it’s Antares, a true star and the brightest star in the constellation Scorpius the Scorpion.

Because of its red tint, Antares is sometimes mistaken for Mars. Interestingly, the name Antares is from the ancient Greek, meaning “rival to Ares” – Ares being another name for Mars, the god of war. Mars generally will outshine Antares, but not at the moment. Just returning from its sojourn behind the sun as seen from Earth, Mars is at its faintest from our earthly perspective now. It’s far across the solar system from us, about as far as it can be and still be visible.

Where’s Venus? Sorry, this is not the weekend to see our brilliant neighbouring world. Is the goddess of love playing it coy, taking some alone time? No. In reality, Venus is transiting behind the sun from our perspective. She has been the evening star for quite a while, and soon she will become our morning star. Ah, Venus, we miss you when you’re gone and we await your return.