Spot Uranus near the new crescent moon Sunday night: Looking up at the Nightsky 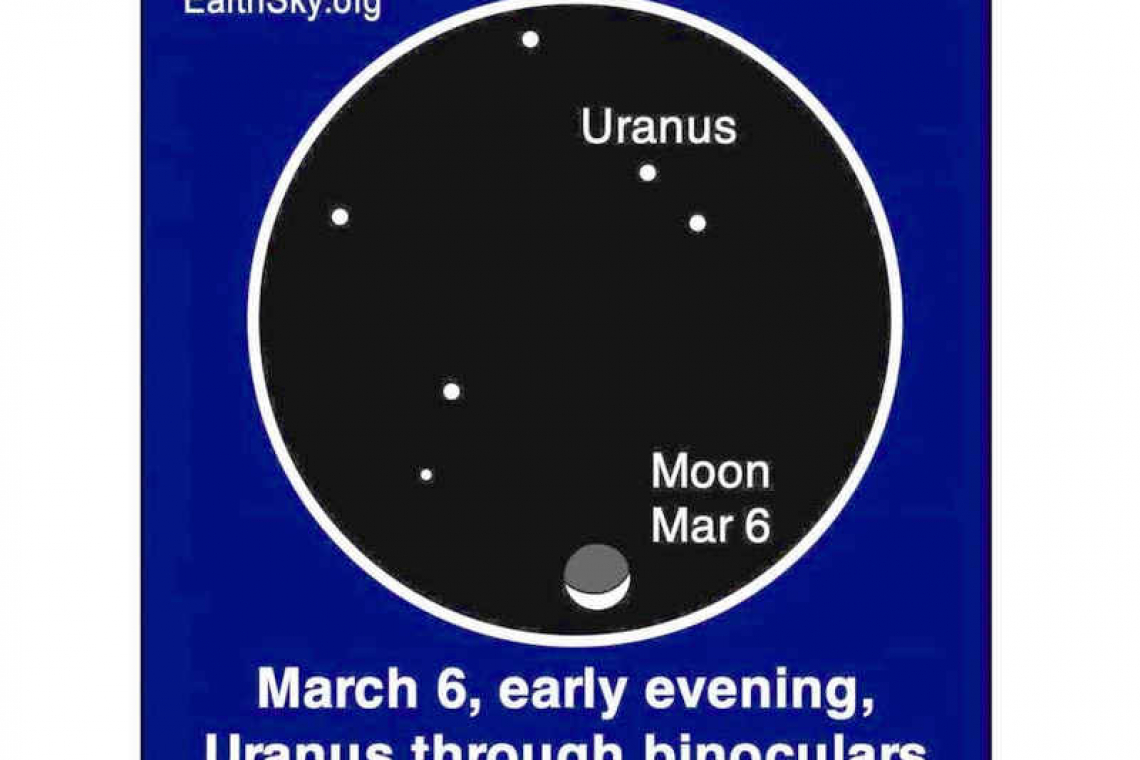 This weekend, we salute the sailors in honour of the 42nd St. Maarten Heineken Regatta. Sailors are inevitably connected with the stars, traditionally using them for navigation across the wide and featureless seas.

The constellations also offer a bit of company during the night watch, and far from any earthly lights, the heavenly ones seem intoxicatingly brilliant. In fact, when you’re at sea, you may see so many of the dimmest stars in the sky – stars you would never see from land, unless you were far from any town or road. It can dazzle your mind and make the familiar patterns of the brightest stars a bit hard to recognize. Even a constellation as familiar as Orion may be hard to distinguish among so many other stars.

Another reason sailors and stars go together is because sailors often have very good binoculars! So this weekend, if the skies are clear, use those binoculars to see a wonderful sight: the distant planet Uranus. Your best night is Sunday night. It will be close to the new crescent moon, so aim your lens up at the moon and find this treasure, one rarely observed by amateur astronomers. The seventh planet from the sun will be found among the stars of the constellation Aries.

The crescent moon moves directly west of Uranus early in the evening of Sunday, March 6. The moon will be about one-fifth of its full disc, so while there will be some moonlight, it shouldn’t be enough to wash out the light of Uranus. Aim your binoculars at the moon, Uranus will be off the dark half, or limb, of the moon. Facing the moon, Uranus will be toward the top of the binocular field, with the crescent moon at the bottom.

If you have keen eyesight and powerful binoculars, you may be able to see Uranus as a tiny greenish-blue disk. If you can’t see a disk or colour in any of the faint dots in view of your binoculars, then try to target Uranus by seeing which light holds steady. The stars will show more of a twinkle. The pair of the crescent moon and the seventh planet sink below the horizon by about 10:00pm, so start looking for them as soon as it gets dark. Good luck!

Meanwhile, the very early morning sky continues to offer views of Venus, Mars and Mercury. Sailors heading south after the regatta may even have the chance to see Saturn join the pre-dawn gathering of planets. Saturn has been transiting behind the sun for months now, but soon we welcome the ringed planet back into our sights. Mercury will meet up with Saturn around March 3, but it will only be visible to sky watchers in the Southern Hemisphere. What a perfect picture!

Thank you for keeping up with the Night Sky articles, backyard astronomy designed for St. Maarten sky viewing. If you are out later on in the week, each star rises about four minutes earlier each day than written here, and the moon rises 50 minutes later. Night Sky is researched and compiled by Lisa Davis-Burnett. Earthsky.org is a key resource for information and images. Questions or comments? Email This email address is being protected from spambots. You need JavaScript enabled to view it.