Pisces & its lore: Looking up at the Nightsky 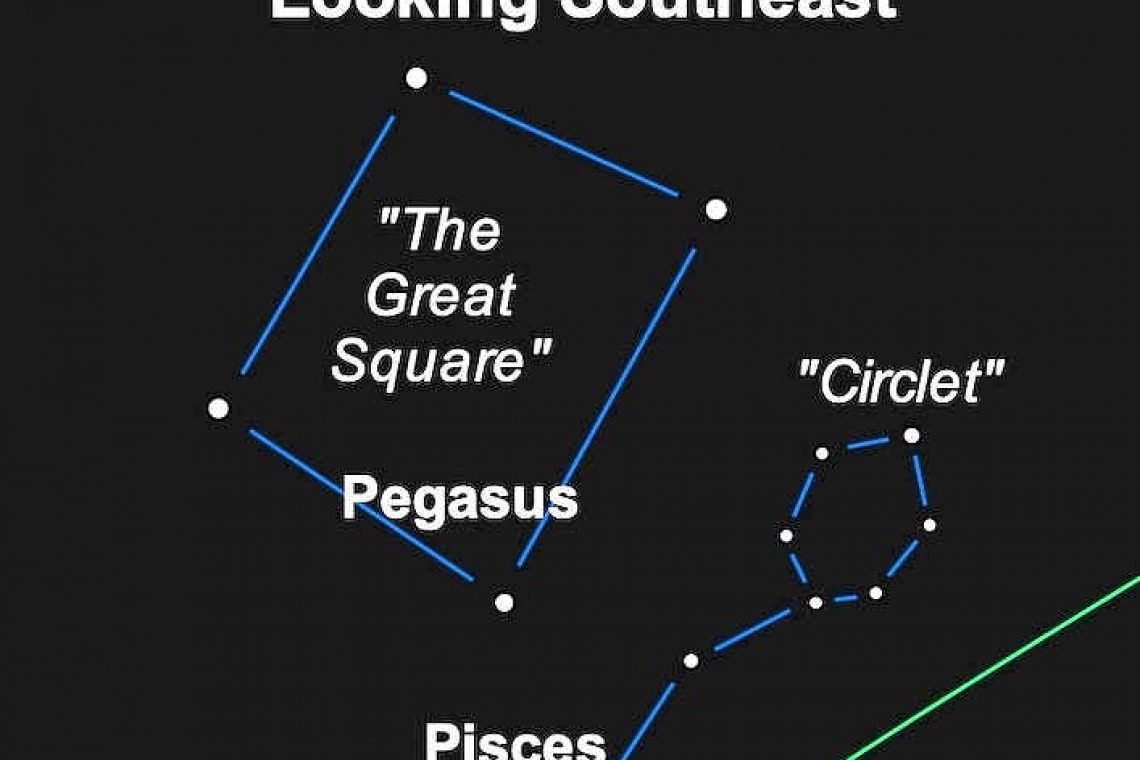 This weekend, enjoy the gentle light of a half-moon as it lingers in the evening hours, setting before 11:00 and leaving the rest of the night to the planets and stars. Let’s pick up where we left off in the last Weekender – recall how we talked about the constellation Pegasus, the flying horse, which is easy to spot due to its asterism, the Great Square.

This weekend we will use Pegasus as a landmark and find the circlet in Pisces. Look east after sunset for the rising Pegasus. Below the Great Square, find a small circular shape of six stars. Easy to remember looking for a Great Square next to a small circle. This circlet symbolizes one of the two fish depicted in the Pisces constellation. The two fish are tied together with ribbon or a rope, according to the legend.

The story goes that a fire-breathing monster, named Typhon, was about to devour Aphrodite (the Roman Venus) and her son Eros (the Roman Cupid). To escape, they turned themselves into fish and jumped into the Euphrates River, as one does. Mother and son tied themselves together with a cord to make sure they would not lose one another in the tumbling waters.

Pisces’ sky lore seemed to have come from Syria, where fish were regarded as divine. The ancient Syrians exported the legends to Greece and Rome. The Syrian goddess of love and fertility, Atagartis, is often portrayed as half woman and half fish. She is thought to be the origin of the Greek goddess Aphrodite and the Roman goddess Venus.

This weekend also marks a great time to start watching for Mercury in the eastern sky before sunrise. The innermost planet is currently at its greatest elongation on October 8. That means Mercury will be at or near its farthest point from the sunrise, meaning the tiny planet will be bright and easy to spot. Then afterwards, the planet will continue brightening. So, later in October, although it’ll be edging back toward the sunrise, Mercury will be easier to see in the morning twilight.

Later in the week, you can spot the waxing gibbous moon near Saturn. Tuesday and Wednesday evenings (October 4 and 5) are your best bet to check out this conjunction, but since the moon will be heading toward its full phase, you may be underwhelmed by Saturn’s beauty, as the overpowering moonlight could be a negative influence. Still, star-gazing is a way to connect with nature and be inspired by the vastness and mystery.