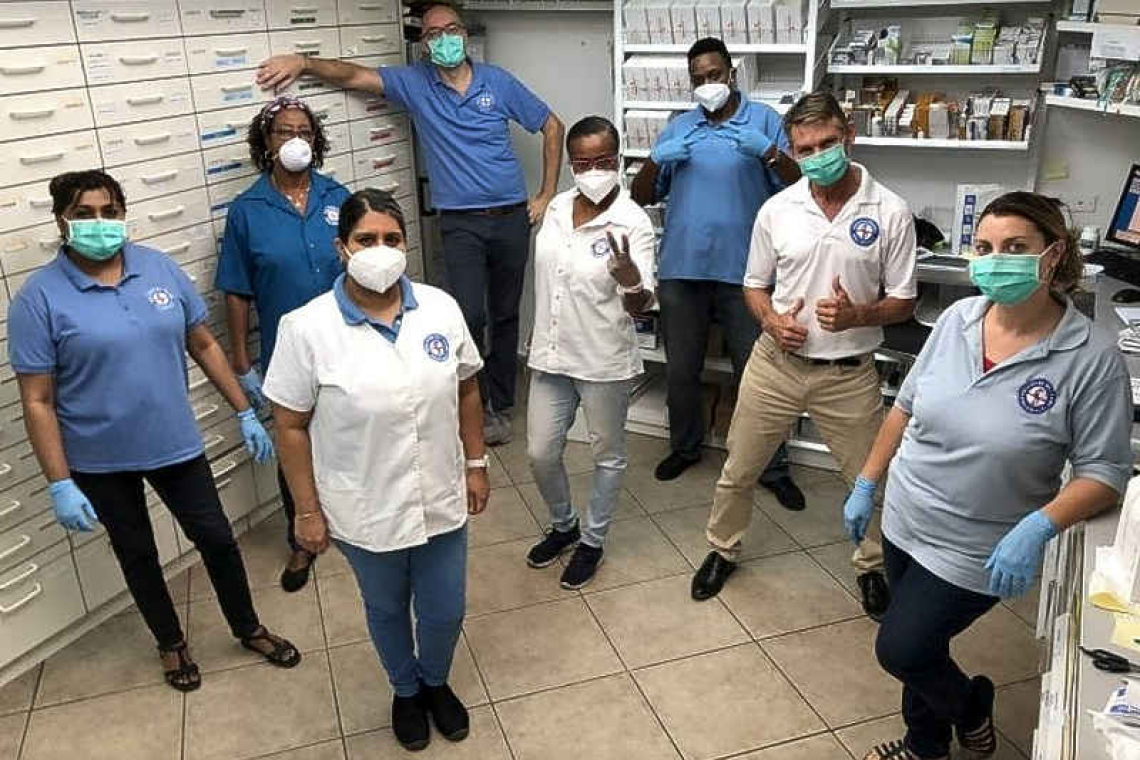 Philipsburg Pharmacy has come a long way since it first opened its doors 20 years ago under the leadership of Dick Luttekes, with minimal staffing and relying on a simple computer programme. With consistent innovation, drive, compassion, and practicality, business has expanded to include Maho Pharmacy, a bustling team of 20, and many loyal customers. To celebrate the milestone which falls on Sunday, the pharmacy will offer 20 per cent discount on all over-the-counter items on Tuesday, February 22, and will generously donate US $4,000 to a number of charitable- and sports foundations.

Luttekes, the owner and lead pharmacist, finds motivation in challenges, finding solutions, and offering patients advice to truly better their health, beyond dispensing medications. With a listening ear, he has always been motivated to also recommend healthy lifestyle and diet choices to make the most impact in a patient’s health. Looking back, this personal attention helped to build a trusting clientele. He is also remembered by publishing articles to inform the public on general health advice for almost 10 years through a column in The Daily Herald’s Health & Beauty supplement.

This proactive approach is also important in identifying potential interactions between medications, especially when patients might be going to different doctors, as communication won’t always be streamlined between different specialists and general practitioners. Even over the counter medications such as ibuprofen can have negative effects for patients who are on blood pressure medication or have borderline heart or kidney issues, so speaking to a pharmacist that considers a person’s health condition can make all the difference to patients.

Looking back at changes over the years during an interview with The Daily Herald, Luttekes explained that even now, important changes are slowly being made in the healthcare system, and that insurance companies and medical professionals are modernising and improving communications with better shared access to data. This will translate to better patient safety, less waste of medicines, less cost to the patients, and less burden on the healthcare system as a whole.

Speaking of modernizing, the pharmacy is now in the final phase of implementing its new, 24/7 pharmaceutical vending machine, called Pharmaself. Clients can pick up their regular medications from the Pharmaself at their convenience any time of day or night, using a personal identification number issued once the package is available.

The pandemic has accelerated changes in digital communications. More prescriptions are shared electronically, and the pharmacy even designated a computer station to handle all email and Whatsapp communication. Another shift was that the increased demand for pick-up and delivery necessitated a track-and-trace programme that linked the prescription programme with the location and status of received digital requests. The system now clearly shows if a prescription was received, prepared, filed in a designated location, or already given to client.

In his earlier career, Luttekes worked as a pharmacist in Rotterdam after graduation. He then travelled to Curaçao where he worked as a leading pharmacist for three years. When the chance came up to work in St. Maarten in 1994, he saw it as an opportunity to work in an environment that was more multinational, and he also liked the hands-on mentality in St Maarten.

After working for the Central Drugstore for seven years and helping to open two more pharmacies in response to growth in demand – Bush Road Pharmacy and Dutch Quarter Pharmacy – a new opportunity came about in 2001.

General Practitioners Luc Knol and Frits Bus were going to start a new office at the location of the old funeral home, with space for a pharmacy. “After some thoughts that seemed to be the best career choice, I was turning 40 and owning my own business is a long-term investment and I decided to dive in.”

Business quickly grew. Within one year there were two assistants, and within three years, another pharmacist. In 2010, Luttekes bought the Maho Pharmacy which had the unique selling point of being open until 9:00pm each night. He now manages and is a pharmacist at Philipsburg Pharmacy, together with fellow pharmacist Petra Scholtens.

From changing countries to opening his own business, he decided to take the chance, and has not looked back since. He still enjoys the day-to-day of promoting general health, looking to make improvements and collaborate with other professionals, and working in a multicultural society where different groups have different approaches of how they work with pharmacists and general practitioners.

Exercise and actively participating in sports and a healthy lifestyle has always appealed to Luttekes and it’s no surprise that sport is one of the causes he is donating to on the occasion of the pharmacy’s 20th anniversary, in addition to other charitable foundations. Recipients are Fitness Coaching with funds going to a climbing expedition in Peru, the Blue Jays youth baseball team, SXM Paws, Freegan Food Foundation, and Light for Life Foundation. The pharmacy also regularly donates to K1 Britannia, and makes internships available to high school students as part of its corporate social responsibility.

As a thank you to its customers, Philipsburg Pharmacy is offering a 20 per cent discount on all over the counter items upcoming Tuesday, February 22 – an opportunity to stock up on essentials such as baby care, skin and hair care, make-up, sanitation products, cold and flu medication, vitamins, supplements, pain/injury management, eye care, and readers. The pharmacy is open Monday through Friday 8:00am to 6:00pm, and Saturday from 9:00am to 3:00pm. It is located at Vogesstraat 4, opposite the old library.