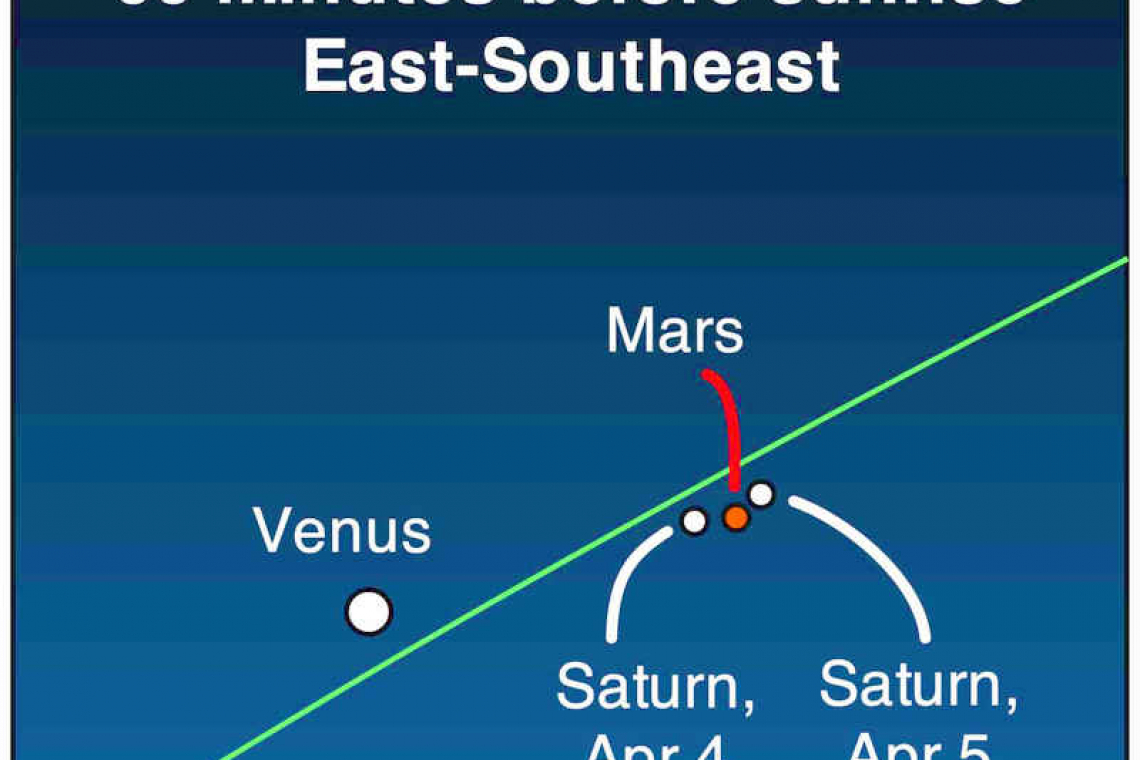 This weekend we are in for an early morning treat! We will witness the prelude of two planets come together in a conjunction. Mars and Saturn are approaching a glorious union in the eastern predawn skies on Monday and Tuesday of the coming week, that’s April 4 and 5, 2022. The duo will be well matched, with Mars shining a bit brighter than Saturn. The pair will be intimately close together, within about a 1/2 degree of each other, about the distance of the width of a full moon apart.

When you look east-southeast about an hour before sunrise you will likely first notice Venus. Ah, Venus, the brilliant morning star, she tends to hold your attention, and rightly so. But, if you look to the west (or to the right) of Venus, that is where you will see two bright points of light in close proximity. This pair is Saturn and Mars. Can you tell which is which? Mars should have a reddish glow, while Saturn looks yellow-white. Does Mars look a hair brighter? Or does its reddish light mean that Saturn looks more prominent?

On Monday, April 4, Saturn will be on the left with Mars to the right and ever-so-slightly lower. On Tuesday, April 5, Mars will have moved to the lower left of Saturn, and the pair will be just a little bit closer together.

This conjunction won’t be as close as the Great Conjunction of Jupiter and Saturn on December 21, 2020. On that date, Saturn was just 6 arcminutes from Jupiter on the sky’s dome. And on that date the planets did not appear to merge either, but stayed as steady, bright beacons. At the time, Jupiter shone at magnitude -2 and Saturn was magnitude 0.6. Jupiter outshone it greatly. Mars and Saturn are closer equals.

This weekend also is a great chance to admire the Southern Cross constellation, also called Crux. This is a famous star pattern, known throughout the Southern Hemisphere, much like the Big and Little Dipper constellations for the Northern Hemisphere. It’s featured on many national flags such as Australia, Brazil, Papua New Guinea, and Samoa. It’s even mentioned in the St. Maarten Song! Yes, we are far enough south to see it, tracing a low arc path just above our southern horizon.

The Southern Cross has two stars with nicknames. The constellation’s brightest star, Alpha Crucis, has the nickname Acrux. Its 2nd-brightest star, Beta Crucis, bears a couple of nicknames, including Mimosa and Becrux.

Because it’s only visible when you are far to the south on the globe, Crux was virtually unknown in classical astrology, they were well known to the Australian Aboriginal peoples as well as the islanders of Polynesia, and the people of southern Africa. In Australia, for example, one Aborigine story is that the stars of the Southern Cross are a reminder of the time and place where death first came to mankind. The two brightest stars were thought to be the glowing eyes of the spirit of death, and the other two are the eyes of the first man to die. Yikes!

Enjoy the night sky this weekend and into the coming week, use binoculars and gaze with fearless abandon. New moon means no moon, and that means extra brilliant stars and planets.