Lavender! By the Passionate Foodie 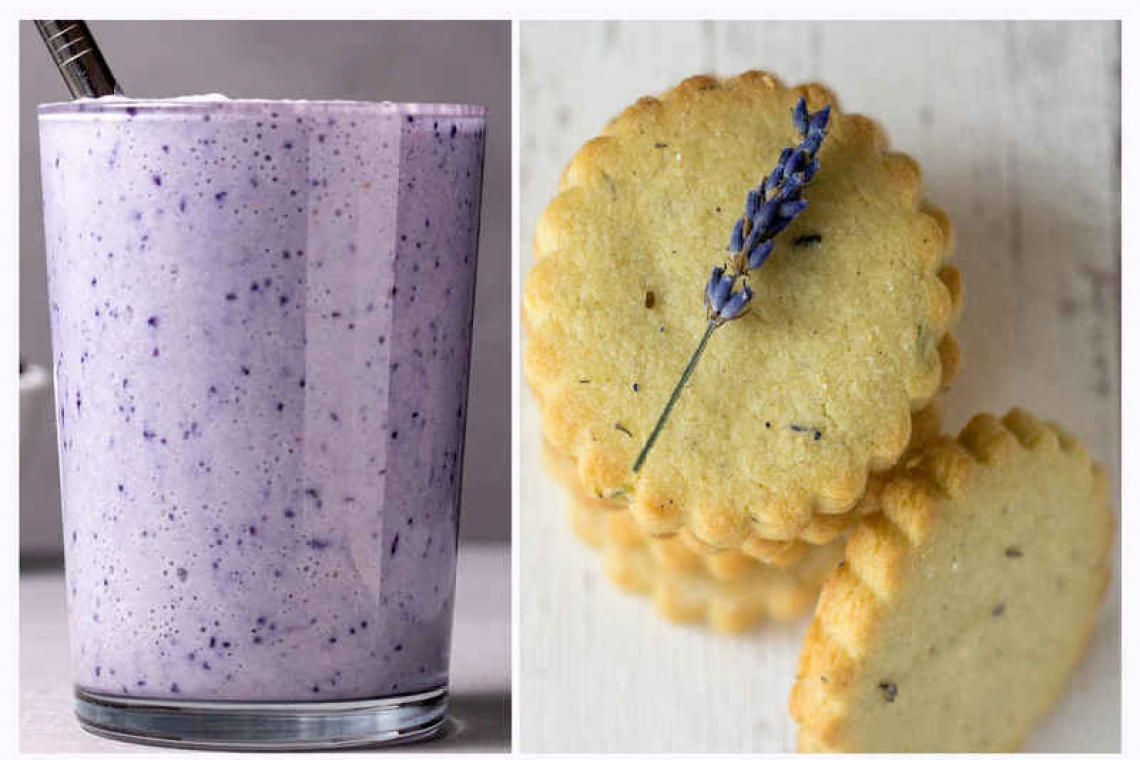 My Gran had this lovely smell about her – not sweet, but florally; not moist (as one would expect living in the tropics) but a sort of dry aroma. Looking back, it was a “different” smell. I used to breathe in the comfort of this smell; a snuggle on her lap made me feel so at peace. The smell came from her chest-of-draws and it lingered in her freestanding (very heavy dark wood) wardrobe. My Mum did not smell like that, she smelt of bright-white lilies.

As the years rolled by, I learnt that my Gran’s smell was lavender – my Mum’s on the other hand was Lilies of the Valley. (As an aside, I snuck a dab of my Mum’s perfume one day and very quickly learnt that not all perfumes do well on all skin-types as my sisters asked what the weird, rather horrid smell was on me!)

Gran had lavender in sachets in her draws and wardrobes. The dried flowers gave the dry smell which sounds horrid as I write it, but the smell is not – it is wonderful and calming.

Lavender has gained popularity again; it is not an “old-timer’s” smell any more. One finds it in sachets, potpourri, candles, soaps, aromatic in pillows, shaving creams, and cleaning supplies, bath and beauty products. Lotions, lip balms and bath salts contain the essential oils of lavenders and one finds it in flavoured vinegar and jellies, shortbreads and toppings for icing on cakes and cookies.

Lavender has become a popular plant for gardeners. I had a couple bushes in Africa when we lived in a region that had a Mediterranean climate. It simply does not seem to do well in tropical areas – I can’t grow it here! (Has anyone else had luck growing it on island?) Lavender, as an ornamental plant in the garden, adds gorgeous silvery leaves and a bushy growth habit perfect rock gardens and borders.

In our jaunts to France, we make at least one trip to the lavender fields to gaze at the miles and miles of rows of lavender bushes. The colour is spectacular. The smell divine and best, the flowers attract the bees. We mostly head to Aix-en-Provence, Marseille, or East of Avignon to see this beauty.

Lavender is indigenous to the mountainous areas of the countries bordering the western European part of the Mediterranean region. Early travellers took the plant with them as they moved from place to place and – once established – it became a much-loved plant. By the sixteenth-century, lavender was already a part of the gorgeous English gardens. Lavender plants were found in American gardens after the first European settlers had been there a while.

From its early cultivation and use, to its presence in today's gardens, lavender has a long and varied history.

Lavender has been in use for over 2,500 years. The early uses of lavender appear to have been mostly for medicinal things. Biblical references to lavender are found in the gospel of Luke by the name used at that time, spikenard. Lavender was also used in ancient Egypt for mummification, and the Romans scented their public bathhouses with it. The name lavender is derived from the Latin verb lavare – to wash.

Lavender has long been considered an herb of love; thought to be an aphrodisiac, Cleopatra (so the story goes) used it to seduce Julius Caesar and Mark Antony. In England during Tudor times, a lavender brew was taken by maidens on St. Luke's Day to discover the identity of their true loves. Lavender spread on the floor under the beds of newly-weds ensured passion. Maidens slept with the flower buds under their pillows bringing on dreams of romance.

Lavender was used for both washing and bathing. In Medieval and Renaissance Europe, washerwomen were known as lavenders; they spread their laundry over lavender bushes to dry and, in so doing, the lovely scent was impregnated into the clothes. Royalty is known to have used lavender during bathing; Louis XIV in particular loved bathing in lavender-scented water.

Lavender was taken to Provence by the Romans more than 2,000 years ago and the spontaneous growth of the plant in the region on large areas was due to favourable climatic conditions. In the Middle Ages, lavender began to be used by locals; and at the end of the 19th century, it was cultivated on the hills of Provence.

French lavender is actually native to Spain. The name French lavender was picked up due to its prevalence in French perfume! French lavender is used in some cooking; it has become quite the thing to use the dried tiny flower buds in baking, desserts, with fresh fruit, and to make lavender tea. The oil derived from the plant’s flowers and the strong lavender scent is very relaxing and soothing when dabbed behind the ear or on the wrist.

Put a lavender sachet under your pillow and you should have a wonderful, good night’s sleep. Lavender is known for its soothing, relaxing qualities and has been used to treat hyperactivity, insomnia, headaches, toothaches, sore joints, and rumbling digestive systems.

Other uses may or may not really work – warding off diseases like the plague and cholera. In 17th century London, people tied small bunches of lavender to their wrists to prevent the deadly diseases. In his book written in 1652, English Physician Culpeper wrote: "two spoonfuls of the distilled water of the flowers taken helpeth them that have lost their voice; as also the trembling and passions of the heart, and faintings and swoonings".

Today, one finds the medicinal use for lavender as a mild sedative and an aid to relieve neuralgia pain – a good soak in a warm bath filled with the heady aroma of lavender before bed does wonders for one’s soul! It can also be used for treating bruises and insect bites with a compress – and a spray of lavender scented oil discourages mosquitoes.

Early household use started with lavender strewn on the floors of castles and sick rooms as a disinfectant and deodorant. It was sold in bunches by street vendors and placed in linen closets as an insecticide to protect linens from moths. Lavender was burned in sickrooms to clean the air. Many Christian homes featured lavender formed into the shape of a cross, which was then hung over the door as a safeguard against evil. In Ireland, brides wore lavender garters to protect them from witchcraft.

I have a couple bottles of dried flower buds I brought back from England in my freezer and I also have lavender jelly which someone gave me – it is a clear sort of preserve which I am not sure how to serve. I was thinking of using it as a spread with butter and cream on a scone or English muffin.

Figs, Halloumi, Honey and Lavender – this is one of those recipes where you decide how much of each ingredient you use.

Slice fresh figs in half and pop them on a baking sheet, skin side down.

Slather them in gorgeous honey (not the cheap kind).

Arrange on a platter and sprinkle dried lavender over all, not too much, not too little.

Serve with toothpicks and devour a wonderful taste sensation.

Transfer sugar to the bowl of the mixer.

Add flour, salt and mix, scraping down the sides of the bowl until dough forms a ball.

Turn onto a clean pastry board and shape the dough into a ½-inch thick rectangle.

Remove and roll dough out into a ¼-inch thick rectangle.

Using a cookie cutter, cut out and transfer to a prepared baking sheet.

Bake 25-30 minutes until pale brown on the edges.

Remove from the oven, cool on cake rack.

Whizz in your blender until smooth.

I just add 2 frozen bananas to a Nutri-bullet with milk to cover.

Add a good shake of dried lavender and whizz.