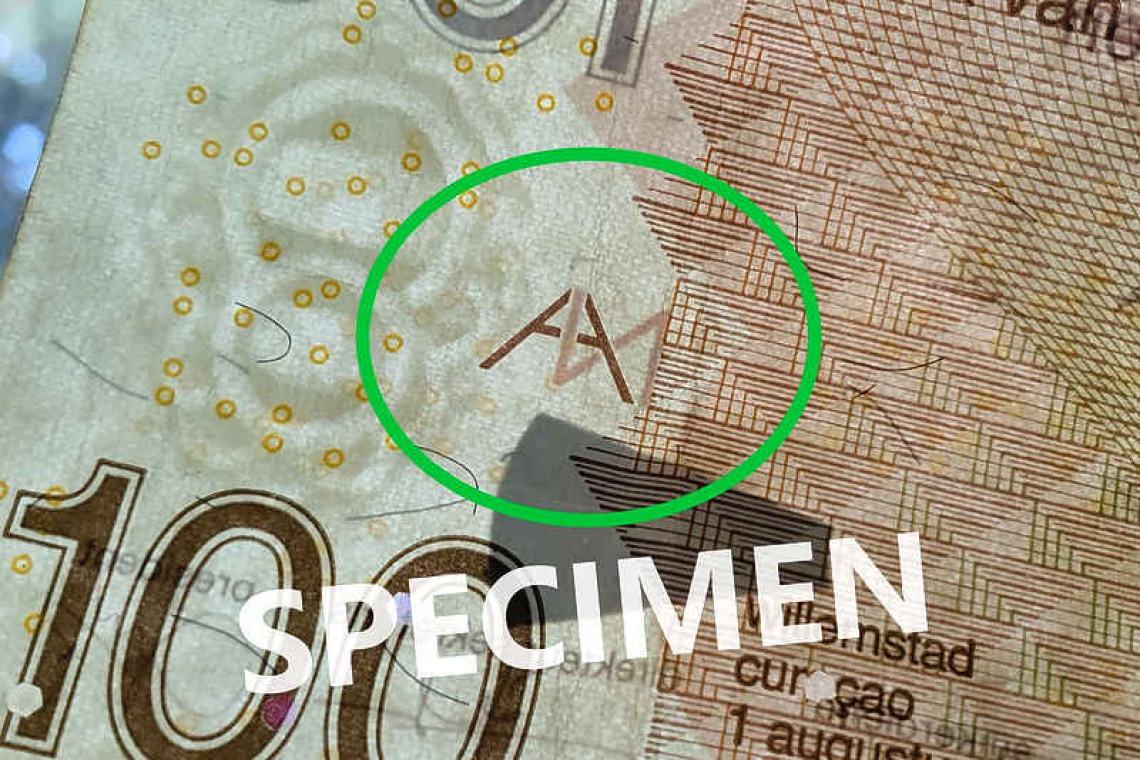 Caption: One indication is that the letters “N” and “A” are perfectly aligned on genuine NAf. 100 bills (hold the bill up to the light to check).

As reported recently, the Central Bank of Curaçao and St. Maarten (CBCS) has issued a warning on NAf. 100 banknotes in circulation in St. Maarten. Pay extra attention, especially during the upcoming holiday season. All descriptions below are provided by CBCS, which lawfully has the exclusive right to issue the banknotes.

Some features can be noticed and/or double checked easily, once you know what to look for:

* The letters N [on the front of the bill] and A [to the back of the bill] are perfectly aligned. This can be seen when holding the bill up to the light. On counterfeit bills the letters rarely match properly.

* The gold-coloured foil is printed over with black and coloured patterns. The foil turns out black on colour copies.

* The front side is imprinted with a pearly ink that gives an iridescent effect. Under angled light, a shiny gold-coloured pattern becomes visible.

* A raised, tactile ink layer is incorporated in several parts of the front of the bill, such as the denomination figures, the texts, the bird and the mark for the visually handicapped.

* The shaded watermark can be recognised by the gradual change of lighter and darker tints when held up against the light.

* Besides the fine black fibres on front and back, some luminescent fibres are visible under ultraviolet light, too. The position of the fibres is different on every bill.

* Most people can read the small print with the naked eye. Others may need a magnifying glass. In counterfeit bills, the smallest print is usually illegible.

CBCS advises comparing a suspect banknote with one of the same denomination, and paying special attention to soiled or repaired bills. If you think a banknote is fake, do not accept it, and notify the police as soon as possible.

If you have trouble identifying some of these features, or would rather have a visual, check out the short-and-sweet, dedicated video on the NAf 100 banknote security features via the link www.centralbank.cw/education/videos/security-features-of-banknotes.