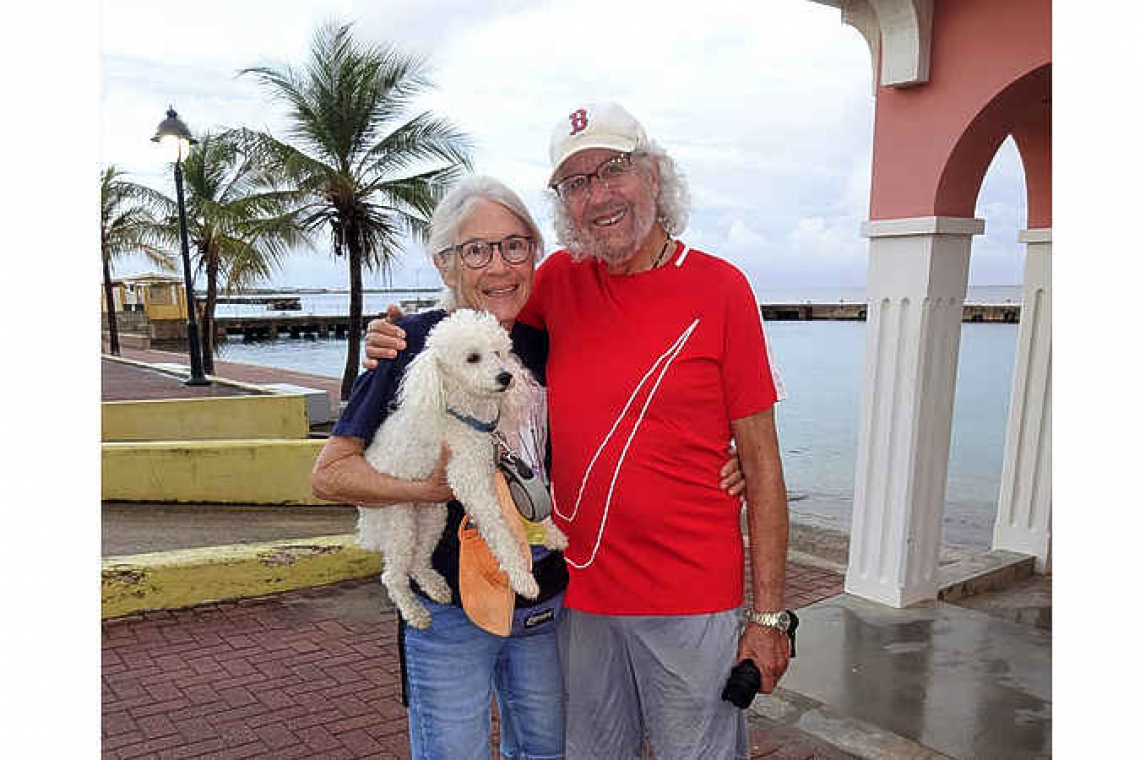 ~ American couple stuck on Bonaire because of dog ~

Robert and Barbara Levine are stuck on Bonaire since March last year. The reason is that there are no more direct flights to Newark, New Jersey. They do not want to take their poodle Milo on a trip with two stopovers: “It gives the dog a lot of stress and where should he put his poo and his pee?”

An introduction to a special couple who walk themselves, each other, and the dog every morning on the boulevard of Kralendijk:

The Levines live in Copake, a town of a few thousand inhabitants in the Hudson Valley, New York. “Two hours north of Manhattan,” says Robert (78). They come to Sand Dollar on Bonaire every year from January to April, where they have a condominium apartment.

When they wanted to fly back home last year, Flamingo International Airport was closed due to Corona. Barbara Levine (also 78): “We have endlessly rescheduled our return flight, but every subsequent flight was cancelled.” Robert Levine: “When it became December 2020, we thought we might as well stay, because under normal circumstances, we would of course have come back to Bonaire in January 2021.”

They point to the dog Milo, who is just running after a cat. “It’s such a sweetheart. Because of Milo, we only want to take a non-stop flight home. If we want to leave now, we first must fly to Aruba – there we have a six-hour layover before we can continue to Miami and then another stop to continue to Newark. That is just too much for such a dog. All that stress and where should he leave his poo and his pee in the meantime?”

Barbara: “And then we haven’t even talked about all the risks of becoming infected with the corona virus during such a complicated trip home. We belong to a risk group.” Robert: “Our last possible flight was on March 25, 2020, we had a daughter and granddaughter to stay, who then took that flight. We thought in the worst case, it will be June, we just bet it on it. It was bad luck.” Barbara: “Our car is still with that daughter. She lives close to Newark, also about two hours’ drive from our house.”

In 1986, the Levine couple went diving for the first time in the Caribbean. Four years later, they were introduced to Bonaire. “We immediately fell in love with the island because of the fantastic diving opportunities!” After renting an apartment for several years, they decided to buy something themselves in 1997.

Robert: “I still had my law practice; we came in the winter for maybe two or three weeks at the most.” Barbara, also a long-time lawyer, did not have much free time either. “Only after we retired in 2002 were we able to come for three to four months.”

The couple still goes diving. Robert’s face shines when it comes to that: “We do it at least three times a week. We know all locations: First, always from a boat, now also from shore.” Barbara: “Bonaire has more to offer than just diving. The people are so friendly, there is poverty, but certainly not extreme. It is also relatively safe here.” Robert: “We are learning more and more about the culture of the island, very interesting.” Jokingly: “Milo is actually quite a good excuse to stay longer on Bonaire.”

The alarm clock goes off every morning at a quarter to six. They do not want to miss a day when it comes to their morning walk. “We take the car and are somewhere between six and half past six at the boulevard at Playa Lechi. We then walk to the classicist fish building just past Karels Bar and back again. We maintain our fitness level with our daily walk. We do chat with people but always keep our distance. For those reasons, we usually cook ourselves.”

Once you start talking to the Levine couple, you are immediately well covered. Extremely well-travelled and well-read, the conversation moves quickly from one topic to another. Robert is a fan of the seventeenth-century painter Johannes Vermeer and has already visited the Mauritshuis museum in The Hague in The Netherlands to admire, among other things, the “Girl with a Pearl Earring”.

Barbara loves languages: “When we were on the isle of Zanzibar for diving, I managed quite well in East African Swahili.” Robert: “Wherever we are, we can always order our food in the national language!” They move just as easily among the Dutch when it comes to literature.

Barbara makes an unexpected move on the chessboard of international conversations: “What do you think of the books of the Dutch author Harry Mulisch? Do you know “The Assault” of him? We loved it, but we thought “The Discovery of Heaven” was much better, one of the best books we have ever read. “

Before the subject gets even a chance to be discussed in more detail, it is again about “Max Havelaar” by the nineteenth-century Dutch author Multatuli. “What suffering the Dutch caused in the Dutch East Indies!” Do not think that they just want to gain a white foot with the Dutch. “We read a lot of classical literature. If a Portuguese wins the Nobel Prize in Literature, or a Pole, we also want to know why, and we will read those books!”

It seems like “never a dull moment” in the voluntarily Bonairean exile. Barbara: “I like to paint; I have made at least thirty beautiful watercolour paintings with typical Bonairean scenes.” She pulls out her iPhone and shows images of donkeys, flamingos, a kunuku house, a boat at sea or an underwater work from five feet away.

Robert was engaged in breeding Monarch butterflies for a while. “I collected the caterpillars, put them in a jar, fed them until they pupate. After that, I saw at least twenty of them fly away like butterflies again.”

Milo (6) looks extremely happy on Bonaire. “Fortunately, as owners of a condo, Sand Dollar allows us to bring a small pet. Milo is therefore not a problem; it is hardly possible to get much smaller. He really loves it here, although I must say that he always has a great time at home in Copake. There he runs through the farmland.”

Foreigners, who are not registered, may only stay on Bonaire for six months. The Levines reported to the government because they do not have a SEDULA. Robert: “Fortunately, we were told that we are not illegal here, as long as there are no direct flights to Newark or New York.” Where Milo previously seemed like a good excuse to stay longer on Bonaire, Barbara now sounds a bit desperate: “We really want to go home by now, I miss it so much ... !”